Li Fu (onyomi: Ri Fu) is a general of Wei. He served as a subordinate of Meng Da. When Meng Da rebelled against Wei, Li Fu eventually surrendered to Sima Yi and opened the gates of Xincheng. In 263, he would participate in the conquest of Shu and serve under Zhong Hui. After Shu was conquered, he was stationed to guard Yuecheng with 5,000 men. Historically, it is unknown whether the Li Fu who surrendered during Meng Da's rebellion and the Li Fu who fought in the campaign against Shu were the same person.

Li Fu sporadically appears in Romance of the Three Kingdoms as an officer with mediocore stats. He can often be found around Chang'an.

Li Fu appears in chapter 94 of the novel. He and Meng Da's nephew Deng Xian leaked information to Shen Yi that Meng Da would plan a rebellion and they were willing to cooperate with Wei should they be given amnesty. Later, when Shen Dan and Shen Yi approached the city and Meng Da went out to join them in the fight, he realized that they had defected to Wei and turned around to return to the city. However, Li Fu and Deng Xian in the city attacked him with archers and announced that they had already surrendered the city to Sima Yi. Meng Da tried to escape, but both he and his horse were exhausted, so the pursuers caught up with him and slew him. Cao Rui promoted Li Fu to the Governor of Xincheng afterwards. In chapter 116, he was sent by Zhong Hui to attack Wang Han at Yuecheng. 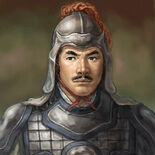 Romance of the Three Kingdoms IX portrait
Community content is available under CC-BY-SA unless otherwise noted.