Li Kan (onyomi: Ri Kan) is a general of the Late Han Dynasty who resided in the western regions of the Han-China. Not much is historically written about him. He hailed from Hedong in Si Province and was one of the named warlords who joined the Guanxi Coalition that opposed Cao Cao at Tong Gate. Li Kan either died in battle or was captured and executed. Romance of the Three Kingdoms identifies Li Kan as one of Han Sui's subordinate generals and expands his activities from his historical account.

Li Kan makes his main appearance in Dynasty Warriors at the Battle of Tong Gate, where he serves under the allied forces. He tries to intercept Xu Huang in the third title and has a minor role in the following two games. In Dynasty Warriors 6: Special, he defends the allied forces' main camp and later defects to Cao Cao's forces with Han Sui and his fellow officers. In Dynasty Warriors 8, he defends the ballistae at the first gate. If Han Sui defects, Li Kan and Ma Wan will follow him to side with Cao Cao. Recent games also have him appear at Liang Province, where he defends the central base in the seventh installment and has to be ambushed, while the sequel has him guard Bian Zhang's main camp and follow the enemy commander to ambush Dong Zhuo.

In Romance of the Three Kingdoms, Li Kan is given average battle skills and poor domestic skills. He is only good with cavalry units and serves under Ma Teng, Ma Chao, or Han Sui, depending on the scenario.

Li Kan served as one of Han Sui's eight commanders during the battle against Cao Cao. In chapter 59, after Cao Cao's forces had crossed the river, Li Kan suggested to cede land to Cao Cao and make peace with him. Later, Han Sui defected to Cao Cao and Li Kan joined Cao Cao's ranks as well. He and his army met Ma Chao near a bridge, who immediately set his spear and rode towards Li Kan. Li Kan turned around and fled. Ma Chao was then himself pursued by Yu Jin and his men, but they were unable to capture him. Therefore, Yu Jin shot an arrow at Ma Chao, who dodged it. Thus, the arrow flew on, hit Li Kan in the back and killed him. 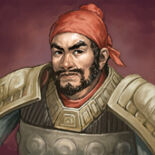 Romance of the Three Kingdoms IX~XI portrait
Add a photo to this gallery
Retrieved from "https://koei.fandom.com/wiki/Li_Kan?oldid=430694"
Community content is available under CC-BY-SA unless otherwise noted.