Liang Xing (onyomi: Ryō Kyō) is one of Han Sui's Eight Riders who participated in the battle against Cao Cao.

In later Dynasty Warriors installments, Liang Xing appears as part of the allied forces at the Battle of Tong Gate. The fifth installment places him at the southern edge of the map, attempting to hold off the advance of Zhang He with the help of the two camps there. In Dynasty Warriors 7, he reinforces the attack on Cao Cao's southern base together with Li Kan and Zhang Heng. If the player convinces Han Sui to defect, Liang Xing will join Cao Cao's forces as well. The following installment has him defend the garrison between the two gates at the center of the map.

Liang Xing also appears as a minor officer in the Battle of Liang Province. The fifth game has him appear in the southwestern part of the map while he defends the central garrison in the eighth game. In Dynasty Warriors 8: Xtreme Legends, he additionally appears in Wei's defense of Chang'an.

Romance of the Three Kingdoms gives Liang Xing average battle skills and very low intelligence and politics. Like all of the Xiliang officers, he is skilled with cavalry units.

Liang Xing was born in Zuopingyi Commandery of western Sili. According to the Taiping Yulan, he served together with Zhang Heng under Li Jue after the latter had lost control over Emperor Xian. In 198, they supposedly joined Duan Wei's mutiny against Li Jue and aided in his destruction.

Liang Xing eventually became a local warlord in Guanzhong. In 211, Ma Chao assembled his forces to resist Cao Cao, who was marching on Hanzhong. Liang Xing responded to Ma Chao's call alongside many other warlords in the area and fought Cao Cao at Tong Gate. The alliance was defeated and eventually collapsed, upon which Liang Xing became a bandit. He plundered his home commandery Zuopingyi, which was administered by Zheng Hun at that time, and caused many officials to flee. However, due to several ploys of Zheng Hun, Liang Xing's bandit force gradually scattered. In response, Liang Xing fled with his remaining men north to his base at Fucheng. When Xiahou Yuan arrived with reinforcements, Liang Xing was besieged by him and Zheng Hun and finally captured and executed.

The novel lists Liang Xing as one of Han Sui's Eight Riders or Eight Knights, his most trusted commanders. In chapter 58, he joined his lord in the attack on Chang'an. Due to Jia Xu's ploy, relations between Ma Chao and Han Sui deteriorated. Liang Xing accompanied Han Sui along with four other generals to Cao Cao's camp in an attempt to draw him out and kill him. They were only met by Cao Hong, who said that Cao Cao understood his intentions and rode away, strengthening Ma Chao's suspicion against Han Sui. Because of this, the five generals persuaded Han Sui to defect to Cao Cao and planned to assassinate Ma Chao. However, the plot leaked out and Ma Chao stealthily led his men to attack Han Sui's tent. In the ensuing fight, Liang Xing was killed alongside Ma Wan while the others escaped. 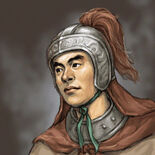 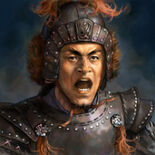 Romance of the Three Kingdoms XI portrait
Add a photo to this gallery
Retrieved from "https://koei.fandom.com/wiki/Liang_Xing?oldid=430186"
Community content is available under CC-BY-SA unless otherwise noted.