Lilan is the main heroine in Fengshen Yanyi 2 and Mystic Heroes. In the English port of the latter game, she is called Lani.

A maiden of mystery, Lilan is the last living priestess of a Taoist clan. In the last conflict, her friends and family were killed at Morning Song. Knowing that tao -mystical energy in the world- can change based on the heart of the user, Lilan uses her powers to seal the mystical tao gates. As she was traveling to seal the gate at Mount Yu, she faints from exhaustion.

Lilan awakes in Ziya's company and assists the protection of his home. She retells her mission to Taigong Wang, stating that she senses an ominous figure who wants to use tao for their own means. Though the mystic agrees to assist her, they are separated when Mount Yu's gate opens. To avoid being a further hindrance to him, she takes her leave from Ziya. However, she agrees to be with him when he insists on traveling together. She continues her priestess duties on their quest, healing and assisting people in need. Her connection with tao mysteries causes her to vanish during random points in the story.

Near the end of the game, it is revealed that she is the mystical Source of Tao. She is the embodiment of the mystical powers which can reshape the human world and celestial realm. Having lost her consciousness to her powers, Lilan is being used against her will by King Shou and Zhong Li. They want to use the Source of Tao to begin the destruction of the human world, to create a new land of tyranny from the world's parallel dimension. Ziya and his party stop them from succeeding, but they are unable to contain Lilan's outburst of tao energy.

In order to restore the balance between worlds, Ziya reluctantly seals away his tao powers and the Source of Tao with Taigong Wang's divine whip. He wants to bring Lilan with him, but she chooses to accept being sealed as repentance for the trouble she caused. The sealing rescues the human world, yet forever cuts it off from the celestial realm. While Ziya was told she would be lost forever, her silhouette mysteriously returns to Ziya during the game's epilogue movie.

She travels with Ziya to the City of Ancients in Mystic Heroes.

A kindhearted pacifist, Lilan does not like to fight unless it is absolutely necessary. She tries to find peaceful solutions and is known to be self-sacrificing to achieve these results. Driven in her mission, she won't tolerate weak-willed complaints to her cause.

Lilan is a mage character who is a fast runner with low defense and life. She has advance healing spells and works to restore the party's health. She is not the quickest or strongest physical attacker, so she mainly relies on magic to defend herself.

In Fengshen Yanyi 2, her attack element is light, which she commonly quotes as a holy light. Lilan is only capable of equipping healing paopei so she is one of the two healers of the party. Keep her protected at all times because her normal attacks are short-ranged and leave her defenses open. Time assaults wisely when she is in the party since her requests often have her ask for Ziya to be near her. If Lilan is in the current party, she can lower the party's fatigue whilst traveling and negate the necessity for resting at an inn. Her battle ability is casting a healing bubble around herself which heals nearby enemies. Lilan can be a valuable ally for grueling boss fights.

She and Ziya can perform special combination attacks with Taigong Wang, Wen Zhong, Deng Chanyu, and Haitang. She can also participate in an all women attack with Ziya.

Here are her battle statistics in Mystic Heroes.

Despite being a slower runner than both Ziya and Nezha, her speed stat is more for attacking than moving. 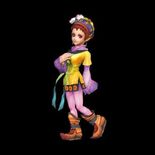 Mystic Heroes render
Add a photo to this gallery
Retrieved from "https://koei.fandom.com/wiki/Lilan?oldid=431718"
Community content is available under CC-BY-SA unless otherwise noted.