Liu Bang (劉邦, onyomi: Ryū Hō) was a warlord in the late Qin Dynasty. Later, he fight against Xiang Yu to seize power in China. As a result, Liu Bang won, and established himself as the first emperor of the Han Dynasty in the name of Gaozu.

In Rise of the Phoenix. He is an important leader of the Han army. His main mission is to destroy Xiang Yu and allies to unify the land. His early followers will have Fan Kuai, Xiahou Ying, Cao Shen, Zhou Bo, Lu Wan and Xiao He.

He was a special character in Romance of the Three Kingdoms XI-XIII. In addition, he appear as a gold card officer in Sangokushi 12 Taisenban.

He appeared in the event Chu – Han Contention in Romance of the Three Kingdoms: The Legend of Cao Cao.

Liu Bang (256 or 247 BC – 1 June 195 BC) was born in Pei County and was a son of Liu Taigong. When he grows up, went to serve as a prisoner jailer. One day, he was given a mission to detain a prisoner to the capital Xianyang. While traveling through Mount Li, with some prisoners trying to escape. Liu Bang has mercy, therefore released those prisoners. Those prisoners saw that Liu Bang was a good person, they so happy to follow up to serve him. When they continue traveling, met a white serpent. Liu Bang saw so, then entered and killed that white serpent.

Later, Liu Bang gathered people in hopes of opposing the Qin Dynasty which is supported by Cao Shen and Xiao He. Which Liu Bang could use his little troops to seize Pei County and style himself the "Duke of Pei" (沛公). Later he joined the army of Emperor Yi of Chu and able to lead his soldiers seize Xianyang.

Later, he almost died in Feast at Hong Gate and when he knew that Xiang Yu started as "Hegemon-King of Western Chu" (西楚覇王), Liu Bang decided to establish himself as a "King of Han" (漢王). After that has been at war against Xiang Yu since 206 BC – 202 BC. Finally, Liu Bang emerged victorious following the Battle of Gaixia and established himself as the first emperor of the Han Dynasty. When Liu Bang became emperor, then ordered to reduce taxes and establishing policies to help the people. Making the people all love and respect him. 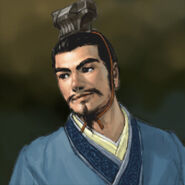 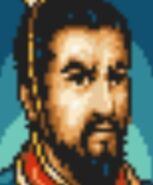 Rise of The Phoenix portrait 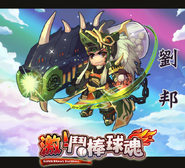