Liu Xun (onyomi: Ryū Kun) is the Prefect of Lujiang who served under Yuan Shu. He was tricked into abandoning his city by Sun Ce and later fled to join Cao Cao.

In Dynasty Warriors 4, Liu Xun is Sun Ce's main foe during the latter's Pacification of Jiang Dong. Liu Xun, aided by Yuan Shu, is originally based in Huan Castle, but retreats to Mt. Xisai, where he is defeated by the Little Conqueror's army after he defeats all of Yuan Shu's generals.

In Dynasty Warriors 5, Liu Xun accompanies Yuan Shu in reinforcing Lu Bu at Xia Pi, should the player fail to take the floodgates in time. Dynasty Warriors 6 has him appear at Wu Territory and the Campaign against Yuan Shu.

Liu Xun appears in Dynasty Warriors 7 as an officer of Wei and serves mainly as an opponent in Wu's story. He joins the defense of Xuchang and Hefei and later joins Cao Pi in his invasion of Dongkou. In Xtreme Legends, he is the enemy commander at the Battle of Mt. Xisai, which is the hero scenario dedicated to Da Qiao. Sun Ce's forces coerce four enemy strongholds to defect, and also repel Cao Cao's army, before defeating Liu Xun.

In Dynasty Warriors 8, Liu Xun only appears at both versions of Wu's battle of Hefei and joins Cao Pi's escape from Shouchun in Wu's hypothetical path. The Jiangdong stage from Dynasty warriors 4 is also available as DLC, where he reprises his role as commander, with aid from Yuan Shu. Players can also play from his army in free mode, where they are severely outmanned and must protect Liu Xun from Sun Ce's onslaught.

Liu Xun is given poor stats in Romance of the Three Kingdoms. While his fighting skills are in the low 60's, his other stats range in the 40's, 30's and 10's. He usually serves under Yuan Shu before joining Cao Cao in the later scenarios.

Liu Xun was born in Langye, Qing Province. He was a distant cousin of Liu Xie and an old friend of Cao Cao. When he joined the warlord Yuan Shu, he became a magistrate. Later, Yuan Shu promoted him to Administrator of Lujiang. In 197, Yuan Shu declared himself Emperor and his officer Sun Ce, who had previously conquered Jiangdong, cut his ties with him. An alliance against Yuan Shu was formed, which Sun Ce joined. Sun Ce then sent his cousins Sun Ben and Sun Fu to attack Liu Xun. Liu Xun in turn asked Liu Biao's general Huang Zu in Jiangxia for help, who sent his son Huang She and Liu Biao's nephew Liu Pan to aid him. However, Liu Xun was easily defeated before the reinforcements arrived.

In 199, Yuan Shu died. Zhang Xun and other generals wanted to surrender to Sun Ce, but Liu Xun refused. He led his forces north instead and captured the former generals of Yuan Shu as well as his son Yuan Yao and the rest of his family and brought them to Lujiang, holding them hostage. A short time later, Sun Ce led his forces to Lujiang and attacked the city. Liu Xun was tricked into abandoning the city and then defeated, after which he fled north to Cao Cao.

When he joined Cao Cao, Liu Xun was made "General Who Pacifies Caitiffs". Cao Cao further made him Administrator of Henei in Si Province. During his service under Cao Cao, Liu Xun often striked with his haughty behavior. While serving in Henei, he did not punish house guests who violated the law and even started to violate laws himself. He even went as far as insulting famous officials such as Yang Pei. For this, Liu Xun was eventually executed and his family members in office were all dismissed.

Liu Xun briefly appears in chapter 29 of the novel, where he is mentioned to have been defeated by Sun Ce and have lost Lujiang. 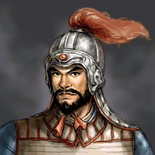 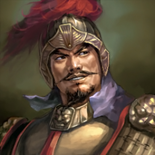