Lixia is a mysterious woman who was sealed within an ancient shrine near Zhao Yun and Lei Bin's home in Changshan. After the duo free her from her prison, she bestows Zhao Yun with a strange power and follows him in his journeys to seek out five mystic gems.

Lixia was made to help familiarize the setting to players. Developers struggled to make her appealing in comparison to the other female characters in the series; her otherworldly design is meant to distinguish her from the rest of the cast.

After she first appears, Lixia is described by Lei Bin as 'incredibly bossy' with a childish side, and demanding when it came to her orbs. As the game progressed however, her personality began to change. She began to put more faith into humans, after seeing the intelligence they have as well as learning how every single one has ambitions and aspirations to achieve, trusting her orbs to them to use in battle.

As Chiyou, a demon defeated by Lixia, his personality shows immediately, showing dark behavior with an ambition to destroy the world with the five orbs.

Her relationship with Zhao Yun and Lei Bin grows throughout the game. At first, she views them as non-trusting, In the end, when Lixia chooses to sacrifice herself to save the world from Chiyou, she shows sadness in leaving her friends, showing the strong bond she created with the two. 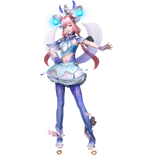 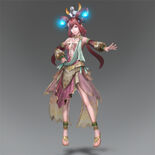