Ma Yunlu (馬雲騄, onyomi: Ba Unryoku) is a fictional character from Fan Sanguo Yanyi, a retelling of the Romance of the Three Kingdoms novel created by Zhou Dahuang during the early 1900s. The daughter of Ma Teng and the younger sister of Ma Chao, she became a formidable warrior in her own right and had a straightforward attitude to match. She joined her brother when the rest of their family was executed by Cao Cao for treason.

Ma Yunlu remained unmarried until she reached the age of 22 due to her family's fears that she would marry an inferior man. Upon meeting Zhao Yun, she eventually became his wife. Liu Bei acted as a witness to their marriage while Zhuge Liang and Fa Zheng served as the matchmakers. She then joined Shu as a general and provided her husband with moral support.

Ma Yunlu is one of the first female officers to be playable in the Romance of the Three Kingdoms games, debuting in the ninth installment. Available starting in the fourth scenario, she is one of the few female characters whose stats primarily focus more on war and leadership. She is also portrayed as best friends with Huang Yueying due to their mutual interest in military strategy. Her LDR and WAR are high even among the male generals while her domestic stats are average. Ma Yunlu shines the most commanding cavalry troops as her personal skill improves the damage dealt when under this unit type.

100man-nin no Sangokushi includes a character episode dedicated to her. A tomboy who dreams of achieving glory, she trains with her family, Han Sui, and Pang De during their leisure to prove her worth to them. She wishes to join them in battle yet Ma Teng wishes for her to be Yangshi's bodyguard while they are away at Ye. Ma Yunlu is faithful to her duty until Yangshi brings news of her father and older brother's deaths. Her sister-in-law urges her to help Ma Chao avenge them at once. As she races towards the battlefield, Ma Yunlu intercepts a group of Cao Cao's officers targeting the flank of her family's troops and personally defeats Xu Zhu and Xu Huang.

When she reunites with Ma Chao and Ma Dai, they spot Han Sui riding towards Cao Cao's for a defection. Ma Yunlu stops him and attempts to capture Jia Xu, the mastermind behind the plot. Cao Cao stands in his strategist's defense and is beaten by a furious Ma Yunlu. Despite her victory and vigored pursuit, he escapes capture. Her attention is diverted away from battle when Yang Qiu and Hou Xuan kidnap Yangshi in a bid to use her as a hostage. Ma Yunlu saves her before they leave Xiliang and plows a path through the traitors. The ladies reunite with Ma Chao at Ji Castle. After Ma Yunlu defeats Wang Yi's battalion and duels Wei Kang, the castle is theirs for the taking.

Ma Yunlu suspects the castle residents will betray them and tries to remain vigilant. She warns Yangshi to refuse Wang Yi's offer to chat. Before she can insist further, she is distracted by Zhao Yue's offer to spar with her. The sister then appeals to her brother, but he is called away by an attack by Cao Cao's army. She returns to her sister-in-law's room to find it empty and desperately searches for her and her children. She fears for the worse when Jiang Qu is present. Zhao Ang stalls Ma Yunlu for his wife's escape. She arrives too late to save Yangshi and her child yet she defeats Wang Yi to protect her brother's troops from a pincer attack.

"You dare speak of honor!? You and your masters are champions of deception. I'll be dead before I let any of you take my other brother away from me!" 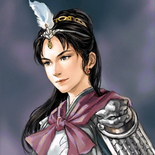 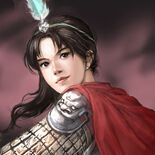 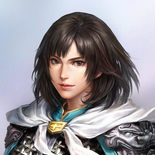 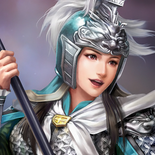 Alternate skin battle sprite
Add a photo to this gallery
Retrieved from "https://koei.fandom.com/wiki/Ma_Yunlu?oldid=440290"
Community content is available under CC-BY-SA unless otherwise noted.