Marco (マルコ) is the First Division Commander of the Whitebeard Pirates. When he first met Portgas D. Ace, he wanted to make friends with him. Marco told him to either leave the ship, or bear Whitebeard's mark to be one of his children. At the time of the Summit War, Marco fought alongside his allies to save Ace. He also joined in Monkey D. Luffy's fight against the admirals of the marines.

The blonde commander was injured by Kizaru's light attack while he was distracted by the horrific sight of Whitebeard's failing health. In the aftermath, Marco thanked Shanks for giving Ace and Whitebeard proper burials. He is now the new commander of the Whitebeard Pirates.

In the fourth game, he can be unlocked by getting an S rank in 30 different battles.

During the Frenzy Dial crisis, Whitebeard pits Luffy against Marco to test his abilities. When the battle is over, Marco agrees to help rescue Luffy's crew. They first return to Punk Hazard where Luffy lost his crew to the Frenzy Dials.

Marco is usually calm. He was saddened when Whitebeard and Ace died.

: Marco does two diagonal kicks upwards. His arms then transform into his phoenix wings and he launches himself into the air, dragging nearby enemies with him. He then flies forward dragging the enemies along with him, and then does a downward kick to send them towards the ground. His arms transform back into human form and he lands.

: Marco starts with a diving kick as he plants his foot into the ground, knocking enemies upwards. He then flies into the air in full phoenix form and slowly flies forward for a distance, dragging enemies with him and bulldozing any in his way. He can be directed with the control stick during this movement. He finishes by swooping upwards and landing back down in human form.

: Marco turns his arms into phoenix wings and sends out a blast of his phoenix flames forward. He then charges forward through the air leading with his foot, kicking enemies to his front. He finishes by doing two upward flip kicks, which launches enemies upwards, before landing back down.

: Marco dives straight down into the ground and lands hard with a shockwave that knocks enemies back.

: Marco turns into phoenix form and flies straight forward quickly, twirling his body in a drilling motion, dragging enemies with him.

: Marco flies straight forward in his phoenix form in a drilling motion, dragging enemies with him. He swoops down and then grabs a single enemy in his human form, and rises into the air. He then proceeds to slam the enemy hard down onto the ground.

: In his phoenix form, Marco gathers a large group of enemies into the air and starts flying around them in circles very quickly. During this time, he's continually dealing damage to enemies caught in the vortex. He finishes with a final upwards kick.

: Level 1 Musou: "Rebirth Flame": Transforms into his full phoenix form and hovers in the air. He then releases a shockwave forward that knocks back enemies. This special will recover a portion of his health.

: Level 2 Musou: "Blue Transmigration Flame": Turns into full phoenix form and knocks a group of enemies in front of him into the air. He then flies around them in circles, dealing damage with each cycle, then flies to the top of them and slams down hard onto the ground, dealing tremendous knockback.
R1 (Special Skill): When used on the ground, Marco's limbs turn into phoenix form and he rises into the air. When used airborne, Marco's limbs turn into phoenix form and he descends to the ground. This allows him to toggle between being on the ground or being in the air. He will drag enemies with him in the direction he's going.

Marco ate the Bird-Bird Fruit, Model: Phoenix, which is a Zoan-type Devil Fruit that allows him to transform into a phoenix of blue flames at will. This fruit is further classified as a sub-category of Zoan Devil Fruits, known as a Mythical Zoan, which is said to be even rarer than Logia fruits. While other regular Zoan Devil Fruits shown in the series allow the user to transform into pre-existing animals, Mythical Zoan types allow the user to transform into mythological creatures that are the subjects of legends, and may or may not exist in reality. Such beings usually also possess other fantastical abilities, which the eater can fully utilize.

Marco's mastery of his fruit is so great that he can transform selective parts of his body without affecting others, such as only transforming his arms into his phoenix wings. By doing so, Marco gains the rare ability of flight, and his fighting style revolves around unleashing aerial strikes on enemies while remaining mobile in the air. Because he needs to use his arms/wings to fly, Marco developed a combat style that revolves around his immense leg strength, allowing him to perform powerful kicking techniques. His kicks can be further enhanced into sharp slashes, by transforming his feet into his Phoenix talons. His R1 allows him to smoothly transition between the air and the ground, and by incorporating it into his strings, players can seamlessly chain combos together with him, keeping him in the air for as long as possible and not giving enemies a chance to rest.

As the Phoenix is said to rise again from its own ashes, Marco's phoenix powers allow him to regenerate from injuries, increasing his resilience tremendously. This is achieved by performing his Level 1 Musou attack, which regenerates a portion of his health. 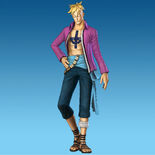 One Piece: Pirate Warriors 2 render
Add a photo to this gallery

Retrieved from "https://koei.fandom.com/wiki/Marco?oldid=438633"
Community content is available under CC-BY-SA unless otherwise noted.