Marie Rose (マリー・ローズ, Marī Rōzu) is a character from the Dead or Alive series who made her debut in Dead or Alive 5 Ultimate Arcade.

Aizawa noted that Marie is in a lot of character scenarios, so she took care to make Marie sound as soft as possible. She hopes everyone gets invested in the game for them.

On one hand, Marie is mischievous, confident and playful. On the other, she can be absolutely brutal towards her opponents. She is especially sensitive about any remarks regarding her height. She appears to enjoy Honoka's company.

: Marie stomps her feet on the ground as if throwing a tantrum, damaging enemies in her immediate vicinity.

: Marie does a rising upwards kick, then continues to kick repeatedly as she descends to the ground.

): Marie swipes her left fist to the left, then to the right. She then swings upwards with an uppercut, then thrusts forward with both fists.

: Marie smacks the enemies into the air and turns around and thrusts her rear end at the enemies to tackle them.

): Marie somersaults on the ground and tumbles forward, damaging any enemies in her path. She then does a handstand to kick enemies up, then starts twirling on one leg with her other leg extended for a spinning kick attack. She finishes with a final roundhouse kick to the right.

: Marie twirls in the air and lands on the ground with a forceful stomp that has a hitbox.
Jump +

: Marie does a double axe handle, swinging both fists downwards.

: Marie smacks the enemies upwards, then does a flying forward kick at them, then flips into the air. Upon landing, Marie leaps forward with a flying drill kick.

Marie is a very slow burner when it comes to performance. She's far outstripped by most characters when it comes to her initial kit, and that includes her fellow defaults Kasumi and Honoka. At level 5, she actually gets trickier to play since her fifth normal attack adds a huge knockback that reduces her single-target control, which is about the only positive she has initially.

She shows her strength when the difficulty is raised to Hard or higher: at this point positional defense actually matters, and her attack strings do not leave her open to frontal counters nor flanking. She does not need Tenacity, for example, which is almost a no-brainer for many others. She can focus much more heavily on offensive Hero teams and card abilities because she already has survivability. Her normal string is very good against enemy Heroes and her C6 enables her to fight them in the midst of a horde of troops.

C1 is an effective knockup to grounded opponents, C2 is the fastest burst damage she has and is more useful at high Bravery levels to clear small groups of soldiers. C3 is a good stun that becomes a good crowd-clear with a Love card equipped. The follow-up attack from it is more useful to evade oncoming attacks than it is as an actual attack since it scatters targets dealing little damage. C4 is pretty forgettable, being a high-knockback with a circular splash, pretty much the opposite of what's required for crowd-clearing. This is a big part of why she underperforms initially. C5 is a typical high knockup, but she doesn't really need to use it. C6 is a spring kick that applies status. The follow-up spinning whirlwind kick is often a waste of time since targets are often dead by that point, but is useful as an attack on Heroes while in a crowd or if a Fire card is equipped. Seeing as crowd-clear is more of an issue to her than duelling, which she's very good at, Love is generally a more useful element for her than the other obvious choice, Fire. Her C3, C4, C5, C6 and jump charge attacks all inflict status at or near 100% rate to targets.

Her Musou consists of three increasingly-long lunges, so to make best use of it, you must be fairly close to the target(s) at the beginning. That said, the first two strikes do very little compared to the third, so missing with one or both is no big deal.

When facing Marie as an opponent, be careful of her upgraded Hero skill Bloody Rose on the rare occasion that she's high enough Bravery to access it. It finishes with an invisible shockwave that has no telegraph and deals considerable damage at considerable range. 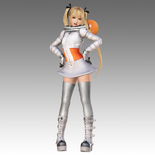 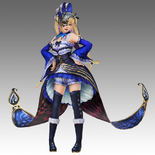