When Mitsuki was an infant, her father launched a failed rebellion against Nobunaga to unite all the dissenting forces in Owari and allowing his brother to crush it in a single swoop. Nobuyuki would insist on the death of both himself and Mistuki, but Toshiie Maeda was unable to bring himself to kill Mitsuki and left her to the Kōga clan before returning to his lord at Okehazama.

Growing up, Mitsuki would train alongside Kazuuji Nakamura, and the pair are hired by the Rokkaku clan to stop Yoshiaki Ashikaga's forces at Kyoto. By coincidence, she encounters Nobunaga and mistakes him for her actual father, and surrenders after her defeat. As a member of the Oda, she is left under the care of Mitsuhide Akechi and joins his forces when they battle the Mōri at Gassantoda.

The battle goes awry as several allied officers, including Shikanosuke Yamanaka, are captured. Mitsuki escapes but feels guilty that her inexperience led to their defeat, but Mitsuhide encourages to stay strong and persevere. She later rejoins Kazuuji in stopping the Miyoshi Triumvirate's revolt against Yoshiaki.

When Nobunaga is betrayed by the Azai during his campaign against the Asakura at Kanegasaki, Mitsuki stays behind to help the rest of the forces escape before rejoining Nobunaga. Unfortunately, Nō is shot down, and Mitsuki is only able to catch a glimpse of the culprit's emblem before he escapes.

Noticing that her lord was growing increasingly cruel since Nō's death, a distressed Mitsuki is encouraged by Sandayū Momochi to aid in the brutal campaigns against the Asakura and the Azai, but the destruction of both enemies does little to stir Nobunaga's heart. Seeing her as a useful pawn, Sandayū reveals her true parentage and creates doubt within Mitsuki's heart.

Initially, Mitsuki refuses to believe the statement, but when Nobunaga orders the troops to abandon Shikanosuke and the Amago clan at Kōzuki Castle, Mitsuki defiantly returns but only finds the battle done and her friends already dead. Though she returns to Harima, she deserts the Oda and chooses to join Sandayū's rebellion at Iga. After being remonstrated by Kazuuji and Mitsuhide as well as Sandayū being seemingly killed, a troubled Mitsuki asks Mitsuhide for advise on what to do, and Mitsuhide asks for her to choose her own path.

At Honnōji, Mitsuki decides to confront her uncle, and finally learns of her father's noble sacrifice, and the grand task her uncle took up thanks to him. When Mitsuhide's forces arrive and attack Nobunaga, Mitsuki takes her uncle's side and tries to stop the fighting. Ultimately, Mitsuhide defeats Nobunaga, and the warlord chooses to perish and allow his retainer's dreams to take fruit instead.

Choosing to honor Nobunaga's will, Mitsuki takes Mitsuhide's side at Yamazaki. Despite their efforts and the sacrifice of Toshimitsu Saitō, Hideyoshi is the final victor, and Mitsuki and Mitsuhide escape to the woods. Once Mitsuhide finally passes away from his wounds, Mitsuki disappears for parts unknown.

She doesn't betrayed Oda army at reverie version of Honnoji but appeared as reinforcements with Mitsuhide and Toshimitsu. Sensing that three illuisons are here. She takes a part to search spy captain to defeat those illusions. She also participate in final battle with Oda army once and for all at respective version of Yamazaki in order to destroy the Anti-Oda army such as Ashikaga army led by Yoshiaki, Mori led by Takakage, Saika led by Magoichi and even Iga ninja led by Sandayū.

Cheerful and helpful, Mitsuki only wishes to be useful to the Oda clan. Though she starts off being curious and inquisitive, especially in fond gratefulness to father figures like Nobunaga Oda, Toshiie Maeda and Mitsuhide Akechi, she quickly becomes accustomed to the harshness of war upon following Nobunaga in his campaigns and wants to make sure that she doesn't lose any of her loved ones to the battles of the era, or see them lose their humanity in their ruthless actions. In any case, this is all for nought as Sandayu manipulates her naive mind and tells her of her true lineage, this makes her angry at Nobunaga but she finds it in her heart to forgive him later on, siding with Mitsuhide to preserve his legacy. 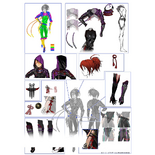