Momiji (紅葉) is an original character created by Team NINJA for the Ninja Gaiden series. She is the Dragon Priestess who guards the Eye of the Dragon, a relic which can strengthen the Dragon Sword. For the sake of her duty, she trained under Ryu and protects the Hayabusa clan in his absence.

She made her first appearance in Koei games as a guest NPC in Dynasty Warriors: Strikeforce and is one of the collaboration characters included in Warriors Orochi 3 Hyper.

In the PlayStation 3 port of Dynasty Warriors: Strikeforce, she appears in town and asks for assistance in slaying monsters who are following her. She will then present the player a series of quests to defeat said monsters. She then rewards them with her naginata upon completion.

While guarding her post, Momiji, along with the entirety of the Hayabusa Village, are sucked into a mysterious distortion and arrive within the dimensional realm. While the coalition investigates the seemingly defended Wan Castle, the officers in charge begin to unwillingly attack them. Momiji intervenes by dispelling Sun Wukong's sorcery, bringing them back to normal. She later joins forces with the coalition to resume her war against evil.

During her training Momiji has deep-seated regrets over the violent death of her elder sister, Kureha. She believes she is too inept to follow in her sister's footsteps as priestess. Her anxieties are put to rest when she reconciles with Kureha's spirit, and Momiji renews her vigor for her ancestral duties. The fair-hearted priestess is a gentle, nurturing protector of her village, especially its children. Enamored with his convictions, Momiji shares Ryu's perceptions of virtue and justice, only resorting to violence against her clan's enemies.

Aside from her camaraderie with Ryu, she also shares an affinity with Huang Zhong, Okuni, Kunoichi, and Himiko in her Warriors Orochi appearance.

"Who's Sanji? A little kid, I suppose?"
"Yes, he's a child, but also a fine Dragon Ninja. I do miss the people of my village... I'm sure they must be worried about me."

): Fires a single arrow surrounded by energy, then jumps into the air and fires two more shots, causing the ground to release chunks of earth each time the arrows hit the ground.

): Knocks opponents into the sky, leaps up in time to perform a spinning slash, then uses own body weight to slam enemies into the ground with weapon.

): Performs a powerful thrust with naginata, followed by another, then finishes it with a powerful swing to the right side.

): Performs a series of horizontal spinning slashes, jumping with each slash.

: Jumps up and spins in place while hovering in the air, ending the attack with a single powerful slash which sends opponents flying.

: Slams the blunt end of naginata into the ground causing chunks of earth to erupt upon impact.
Dashing

: Performs a powerful upward slash to the right.

R1: Pulls out bow and fires three volleys of arrows. Shoots up to five arrows the first time, seven during the second part, then nine for the final sequence.

, R1 (Warriors Orochi 3 Ultimate only): Causes multiple fireballs to spin around Momiji once before scattering on the ground.

: Squats down and holds out naginata before performing a series of spinning slashes.

(True): Finishes Musou sequence by surrounding self in a golden aura, summoning three large fireballs that explode around all sides.

Some of Momiji's abilities and skills are references to the ones she has in the Ninja Gaiden series.

Momiji uses the following big star weapons in the game. 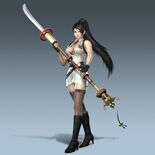