Not to be confused with a main character in Harukanaru Toki no Naka de 4.

Players who participated in Famitsu's Toukiden questionnaire ranked Nagi as their number one favorite character.

Before the main story, Nagi trained to be a doctor with her best friend. She took to book more than her friend, who joked that she would become the world's best scholar. During their studies, Nagi's friend suffered a grievous injury from a demon attack and she needed an operation to be cured. Nagi tried her best to save her but failed miserably. Her friend's death marked the end of her medical career, as Nagi was too scarred by the incident to reconsider pursuing it. With no other recourse left to her, she decided to become a Slayer to at least continue helping others.

She and Fugaku were away on a mission when the protagonist first arrived at Utakata Village. Yamato introduces him/her to them and encourages the trio to build ties with one another by sending them away on two missions.

Kikka forces herself to strengthen the barrier protecting the village, which causes the priestess to suffer physical pain when it is broken in chapter 3. The other Slayers fight to drive the demonic army back yet lack the means of curing the weakened Kikka. Nagi panics when she is handed the responsibility of attending to her, as she is too frightened by the prospect of failure to try. She explains her anxieties to the protagonist in private and is encouraged by his/her words to have faith in her training. When Kikka's heart seems to be failing, Nagi asks for the protagonist's help to locate a herb which can be used as a medicine. Once it is safely procured, Nagi makes it posthaste and it is given to Kikka. She cries tears of jubilation when Yamato reports Kikka's condition has improved.

A demonic horde interrupts their rejoicing, and the Slayers fight to protect a newly created barrier. Realizing that the battle might be endless, Yamato concocts a plan to have the group free the departed heroes of time to learn the demons' source. Nagi and Fugaku assist the protagonist's hunt against a Tsuchigazuki. It appeared that the demon is mortally wounded yet it emerges for one last attack on the party. The protagonist shoves Nagi out of harm's way, getting injured by the boulders the demon hurled in her stead. While Fugaku finishes the demon, Nagi resolves to repay their captain's kindness by performing surgery on their wounds.

She is happy when he/she awakens and recovers. As she expresses her gratitude for giving her the courage to believe in herself, half of her Soul is shared with the protagonist. Nagi explains that the rare phenomenon before them is "Soul Sharing", which can be performed between two Slayers who share strong ties with one another. Glad to see it happen with the person she admires the most, she entrusts her heart to him/her.

Nagi plays second fiddle to the main story objectives in Kiwami. She is the first to object Kuyou's notion to abandon the lost Reki and protagonist, vehemently insisting on their survival. The protagonist asks her if she knows Obito, but she is unfamiliar with the name. She promises to research it in private. When her soul is being consumed by Izuchikanata, she is deluded into thinking she has reunited with her departed friend and enjoys an intellectual conversation with her. Her soul is brought back to the living and she can fight in the final battle.

After Izuchikanata's death, Nagi wishes to author a biography about Obito and company so everyone can learn the truth about the legendary figure and the "Slayers" organization.

On one hand, Nagi appears as a gentle, focused, and mature warrior who is a reliable aide in battle. On the other, she is an overexcited bookworm who loves go on endlessly about topics she is knowledgeable in, whether her audience appreciates it or not. She is called the "explanation demon" for her habit, a nickname which she appears innocently unaware of or ignores. Regardless of her quirks, Nagi is a benign spirit who wishes nothing but good will for other people. Her pure honesty and politeness is a warm contrast to many of her comrades. She stargazes in her leisure.

Once her affinity is at maximum level with the protagonist, she will give him/her the recipe to create a replica of her weapon. Her weapon is the only bow in the game with 100% critical rating. Higher affinity additionally increases the chances of her appearing within the village's bathing area. 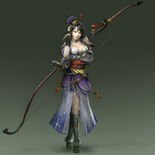 Toukiden Kiwami render
Add a photo to this gallery
Retrieved from "https://koei.fandom.com/wiki/Nagi_(Toukiden)?oldid=215676"
Community content is available under CC-BY-SA unless otherwise noted.