Nami (ナミ) is a member of the Straw Hat Pirates. She is the crew's navigator who plans their ship's course throughout the series. She first meets Monkey D. Luffy during his first confrontation against Buggy. To keep the map she stole from Buggy, Nami tries to double-cross both men but is ultimately swayed by Luffy's personality. Accompanying his travels for a time, she piffles Going Merry during the fight for Baratie. Once Luffy and company track her down and learn about her past with Arlong, Luffy accepts her as his comrade. When he liberates her home from Arlong's control, Nami gladly becomes a permanent member of their crew.

Originally an orphaned child, Nami and her adoptive sister Nojiko were raised by Belle-Mère. Belle-Mère acted as the girls' foster mother and grew a tangerine orchard to support them; she constantly struggled to make ends meet for them. After a young Nami had a bratty spat with Belle-Mère over their poor upbringing, Arlong arrived on the island. He extorted the residents to pay a costly fee for their survival. Encouraging her daughters to live with pride, Belle-Mère used all of her funds to spare her children rather than pay for her own safety. She is consequently killed by Arlong shortly after.

Regretting her torn conciliation with Belle-Mère in her final moments, Nami formed a pact with Arlong to buy her home's freedom from him. Her life as an indentured thief began, but Nami hoped her perseverance would one day free her to chase her real childhood dream: to become a master navigator and compile a detailed world map. She is able to live her dream in earnest the moment she joins the Straw Hats. To forever discard her ties to Arlong, Nami altered his tattoo on her arm to honor her close role models from childhood.

Nami has survived many close shaves by relying on her exceptional intelligence and trickery. She often takes a logical approach in her thinking process, trying to vie for the best case scenario in any situation. If she instinctively feels she cannot win or would be a hindrance for victory, she feels no shame in fleeing whenever she can. A slight chance of success may have Nami pursue with dogged determination. Compassionate to someone's woes, however, her genuine desire to help them may foil any schemes she hatched in advance. She is very honest in displaying her emotions, whether it be her vehement irritation with Luffy's impossible sounding fantasies or her jubilation in exploring a new town.

Enjoying luxuries whenever possible, Nami is easily the greediest member of the Straw Hats. She loves to lavish herself in riches and trendy fashion, patronizing her comrades when they pass up a chance to earn treasure. Her penchant for stealing remains even when she is freed from Arlong, and she may even sacrifice others to obtain the grand prize for herself. Despite her stinginess with sharing her loot, her love for money doesn't overrule her loyalties. She forsakes it entirely if her crew members' lives are in danger.

: "Thunder Tempo": Nami throws her two rods forward to create 3 small clouds in the air in front of her, after which the rods return like boomerangs. She then uses the rod to shoot out a cartoony boxing fist attached to a spring-loaded contraption. The clouds linger after the move is finishes.

: "Thunderbolt Tempo": Nami points her tact skyward, causing 6 small clouds to appear around her and rain down lightning bolts onto the ground.

: "Cyclone Tempo": Nami throws her tact forward, only to have it spin furiously in the air and generate a sideways cyclone, knocking enemies back.

: Nami does 2 left-to-right swings of her tact. She then hurls her tact forwards while it twirls through the air, before returning to her hands like a boomerang.

: "Hot & Cold Bubbles~Thunder Tempo": Nami throws 2 detached rods of her tact forward, allowing them to create 3 small clouds in the air in front. When the rods return to her like boomerangs, she re-attaches them into her full tact and shoots out a cartoony boxing glove attached to a spring. The clouds linger after the move is finished.

: "Hot & Cold Bubbles~Thunder Ball~Cyclone Tempo": Nami throws 2 detached rods of her tact forward, allowing them to create 3 small clouds in the air in front of her. When the rods return to her like boomerangs, she waves the rod in her left hand like a magic wand, sending a small thunder orb that flies forward. She then throws her rods forward, which generate a small cyclone in front of her that lasts for 3 seconds.

Level 1 Musou: "Thunderbolt Tempo": Nami splits her tact into two rods and holds one in each hand, as the produce elemental bubbles our of their ends. The bubbles float upwards and collect together to form a large cloud above the enemies. She then waves her tact to send a thunder orb at the large cloud, igniting it and causing it to rain down a large barrage of lightning strikes.

Level 2 Musou: "Tornado Tempo": Nami connects her tact together in a way that resembles a 2-pronged fork. She points the 2 prongs forward, and the tact proceeds to spin rapidly, generating a large cyclone that sucks enemies in and damages them. It finishes by blasting the enemies away.

R1 Special Skill: "Thunderbolt Tempo": Nami sends lightning up, igniting other present clouds, causing them to each rain down a lightning bolt.
Taunt: Either puts her glasses on, or takes them off.

: "Hot & Cold Bubbles~Gust Sword": Nami swings the Clima-Tact down, then left, then swings it around scattering bubbles and summons clouds on enemies should it hit. She then twirls her tact in front of her while slowly walking forward, then fires a powerful air blast forwards.

: "Hot & Cold Bubbles~Thunder Ball": Nami swings at enemies with her detached rods, sticking clouds to them. She then throws the two rods of her Clima-Tact forwards, creating 3 small clouds in the distance, before the rods return to her like boomerangs. With a wave of her Clima-Tact, she then shoots out 4 large thunder orbs, which spread out in an arc in front of her.

: "Thunderbolt Tempo": Nami points her Clima-Tact up and launches a thunder ball upwards, creating 6 clouds in the sky and causing them to rain down lightning strikes. If there are no clouds already present, the 6 clouds will be created. If clouds are already present, then those will ignite instead of the move creating new ones.

: "Heat Egg": Creates hot balls on the end of the Clima Tact and proceeds to run forward while twirling the hot balls in front of her.

: "Blackball": Nami does two Clima-Tact swings to the right, then winds up her Clima Tact and swings forward, creating dark clouds in front of her and raining lightning strikes down.

: "Hot & Cold Bubbles~Thunder Ball~Cyclone Tempo" (Weather Egg Snow Clouds in Kizuna Rush): Nami throws the rods of her Clima Tact to create 2 clouds in the air, then the rods return to her like boomerangs. She then waves her tact and fires a spray of 4 large lightning orbs, which spread forward in an arc. She then throws her tact forward to summon a cyclone that lasts for 3 seconds. If in Kizuna Rush, the cyclone is covered in snow and ice to freeze enemies.

Level 1 Musou: "Mirage Tempo Fata Morgana": Nami summons two clones of herself (which are actually mirages) and all 3 of them each fire a powerful air blast forwards.

Level 2 Musou: "Thundercloud Rod": Nami creates a long whip that extends out of her Clima Tact, made of thunder clouds. She then swings it around her several times.

R1 Special Skill: "Thunderbolt Tempo": Nami sends lightning up, igniting other present clouds, causing them to each rain down a lightning bolt.
Taunt: Either puts her glasses on or takes them off.

Nami is a master navigator, and is able to read and predict weather patterns. With her knowledge of weather, Nami wields a staff that allows her to conjure various weather-related attacks and effects. She can mix and match the bubbles generated by her weapon; many of her powerful techniques require time and set-up to properly use. During the time in-between her attacks, she often relies on her basic staff-fighting techniques and her quick thinking to defend herself. If the combination of bubbles she uses proves favorable, Nami can then lure her opponent into her carefully planned trap. The Perfect Clima-Tact is capable of conjuring focused lightning storms, a fog which can cloak her movements or harm her foes, a rain cloud, and tornadoes. Several of her moves, including her R1, can ignite the clouds that were set up beforehand. 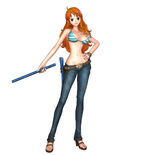 Onami costume
Add a photo to this gallery

Retrieved from "https://koei.fandom.com/wiki/Nami?oldid=438542"
Community content is available under CC-BY-SA unless otherwise noted.