Narsus (ナルサス) is a major character in The Heroic Legend of Arslan and a playable character in Arslan: The Warriors of Legend.

A former advisor to Andragoras III, he was stripped of his position after criticizing the kingdom's slavery. He lived in seclusion with Elam until Daryun and Arslan visit him. He agrees to be the prince's strategist with the promise of someday becoming the court painter of Arslan's reign.

He has a character image song titled Bigaku no Shouzou.

Two downloadable scenarios center on jokes about Narsus and his paintings, "In Defense of Art" and "Investigation in the Royal Capital". The first scenario has him beat up opponents so he can find a quiet place to paint, while the second one has Elam and Alfarid escort him in the search for portraits done by an "unknown artist" in the capital. "Clash with Sorcerers" has him save the Parsian army from sorcerers.

Though at times skeptic and vain, Narsus lives to his reputation as an exceptional strategist and skilled fighter. When he is on the job, he tends to focus on a practical perspective. He is not above using trickery if it lowers bloodshed. He protests slavery but admits that it may be too ingrained into his land's society to be eradicated during his lifetime. His seriousness in his duties covers his personal flaws. Narsus prides himself as an artist who is perfect in everything, yet he is abominable with household chores and his paintings leave much to be desired.

Arslan's faith and goodness amuses him to believe in the prince's potential. Feeling that the prince could become the fair ruler Pars needs, he offers sage advice to curve his idealism. The strategist is best friends with Daryun even with their bitter banter. Elam is his disciple and companion who he saved from slavery. While he does worry for his safety through chastising him, Narsus silently accepts the youth's growing maturity.

R1 (Unique Skill): Narsus spins backwards as he splashes criss-cross waves of paint forward. They travel a ways ahead of him before he triggers them to explode. If the player has any paintbrush traps set, they will blow up with their effects for the final explosion.

: Narsus rapidly paints onto an empty canvas. His observers are blown away by his awful painting.

: Swipes his paintbrush once to stun foes and change the color of his paint. Red paint sets fire elemental traps that set foes ablaze with the Fire element. Blue paint plants water traps that hit foes for many hits. Yellow paint marks a place for him to drop boulders onto foes.

: Turning diagonal brush stroke that launches opponents. Narsus will turn to have his back exposed to anyone who blocks this attack. When his brush hits his hand during his pose, any traps set in advance will explode with their effects.

): Two quick brush strokes that sends two paint traps in front of him. The appending charge repeats this motion for two more randomly colored traps. Traps cannot overlap and disappear if the player doesn't change his aim with the analog stick.

): One brush stroke to place two paint traps in front of him. He performs a diagonal brushstroke to hit foes and to trigger the traps he has set.

): Twirls paintbrush for a few moments before he slams it onto the ground to launch nearby opponents. This blow also causes all paint traps to explode with their effects. He raises his arm to splash a wave of paint that knocks his foes back and places a single paint trap in the direction of his attack.

: Narsus flails his paintbrush in front of him, creating multiple stationary streams of paint. He then sends them forward. The flying paint will leave behind three paint traps at the end of its trail.

: Downwards brush stroke that sends a wave of paint forward.

: Hovers slightly in the air and swipes with a splatter of paint.
Dashing

: Stabs his paintbrush forward. If he connects with an opponent, he will perform a mighty downward swing that causes the ground to erupt and knock foes away from him. Any set traps will explode with their effects after the throw. He does nothing if the first stab doesn't hit.

: A turning leaping brush stroke that sends three paint traps in the direction of his attack.

: Turning diagonal brush stroke that is followed by a leaping slam. This attack causes any set paint traps to explode.

: Swings brush to the right of his saddle.

(during Power Sprint): A harsh swing with his brush.

: Two criss-cross slashes that launches opponents. A series of delayed shockwaves will continue to dice his airborne foes.

: Leaps into the air for a whirling slash.

): Kneeling diagonal slash. While the delayed shockwaves dice up enemies in front of him, Narsus sends them flying with a hopping slash.

: Diagonal slash that launches. He follows with an upwards stab. The delayed shockwaves continue to dice up his enemies.

: Diagonal slash that launches. He hops into the air and unleashes a fury of shockwaves that continue to hit opponents when he lands.

: Rising diagonal slash followed by a quick horizontal cut. Narsus spins for a rising slash and then stabs forward. He straightens for a horizontal swing and ends with a turning v-shaped slash.

: A downward slash. Performing this attack will slightly change the angle of his jump.

: Dives with a turning slash. The delayed shockwaves cover his landing and dice up nearby foes.
Dashing

: Two criss-cross slashes followed by shockwaves that slice up foes in front of him. Cannot move Narsus until the shockwaves end.

): Stabs the ground with his sword that sends enemies airborne. Narsus slashes the air twice to unleash a flurry of shockwaves that continues to dice his foes. While the shockwaves are at work, Narsus poses to prevent the player from moving him.

): An upward diagonal slash. He pauses to let the delayed shockwaves dice opponents in front of him. While his opponents are locked by the shockwaves, Narsus sends them flying with three quick slashes.

): Two low cuts. Narsus turns as the delayed shockwaves take effect and launches foes upwards. He sends them flying with a powerful stab. He poses at the end of the animation to prevent the player from moving him.

: Leaps into the air. If an opponent is in the path of his trajectory, he will hop on top of them and bounce backward. Can be used to lead into his aerial attacks.

: Turning slash that launches him and his hit foes into the air.

): Flips towards a foe. If he connects, he will flip over their shoulders and stab their back. The appending charge makes him follow with three quick slashes. Should he miss, he will roll back to his feet for his landing.

): Crouching turning slash that surrounds him with a whirlwind. The appending charge has him leap into the air to slam his heel back into the ground.

): Three crouching horizontal slices. Narsus hits his opponents into the air with a rising slash, flip kicks, and rolls back to the ground, rapidly hitting his targets on the way down. He ends the sequence with an overhead chop.

: Diagonal slash then a leaping diagonal cut. Lands with an overhead chop and follows with two crouching slashes. Ends with a turning leaping slash.

: An aerial knee bash that projects him forward. He follows with a turning slash and roundhouse kick.

: Hard and quick slash to the front. He twirls and plummets with a one-footed stomp.
Dashing

: Three sliding slashes. This attack is tipped with Miasma element.

: Crouches before hurling a ring of exploding daggers in front of him. Blows enemies away from him.

: Leaps into the air and dives. When he lands, he can follow with a back kick.

: Somersault kicks into the air. Creates a whirlwind which launches targets.

The paintbrush is a weapon that can take on crowds and duels with generals; even if the player doesn't rely on the paint traps, the paint can cut through several opponents and chew through enemy armor on the lowest levels. Traps can be highly effective should the player choose to use them, though they aren't beginner friendly since it does take time to remember the trap and trigger attacks. Paint traps also require space to be effective; if Narsus is too close to a wall or fighting within a small area, traps may not be set. Many of his powerful attacks involving traps won't be available until later levels, so it will require time and patience while using this weapon. Narsus is the slowest whilst attacking with this weapon and the most vulnerable if he misses. If the player uses his attacks with careful consideration, however, the paintbrush can be his strongest weapon.

Narsus shares his sword moveset with Farangis and Hilmes. Narsus differentiates himself with less normal attacks, a slower execution, stronger damage rate, and an emphasis on multi-hitting strikes. His poses at the end of his C5 make it difficult to Charge Shift from, limiting this function to his shorter charges. The sword has balanced speed and offense for both crowds and duels. Any player who doesn't have the patience or space to use his paintbrush can use this weapon as a sturdy substitute.

His dagger moveset is nearly the same as Jaswant and Elam's dagger movesets except that he is the slowest and focuses more on attacks that target a single foe. Narsus's unique C6 is a powerful crowd and officer killer if it is properly aimed. This weapon is the quickest and weakest in Narsus's arsenal. It can be used to put pressure onto opponents during duels.

No Helmet - No Mantle 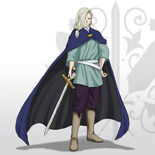 Retrieved from "https://koei.fandom.com/wiki/Narsus?oldid=312968"
Community content is available under CC-BY-SA unless otherwise noted.