Nico Robin (ニコ・ロビン) is the archaeologist of the Straw Hat Pirates and their seventh member. She was originally introduced as the Vice President of Baroque Works known as Miss All Sunday. She worked with Crocodile as his right hand but betrays him once she discovers his true intentions are to find an ancient weapon and create a military empire. Losing her will to live, she resigns herself to die but is rescued by Luffy. She sneaks on board Going Merry and joins their crew, claiming Luffy has the responsibility to give her a reason to live since he saved her.

Robin was born on Ohara and lived an isolated and abusive childhood while learning to read poneglyphs to follow in her mother's footsteps and reveal the True History of the world. To safeguard their secret past, the World Government branded Robin's mother a criminal and destroyed her home using a Buster Call. With Jaguar's help, Robin escapes the destruction of her home and remained on the run from the World Government for twenty years until she joined Crocodile.

When the crew stops to repair Going Merry, she leaves the Straw Hats to work with CP9. In order to protect her comrades and prevent another Buster Call, she is forced to cooperate with the World Government. Overcoming her fears of being abandoned by the Straw Hats, she gains a new self-worth and is eventually rescued by her comrades and rejoins the crew.

Levelheaded, perceptive and observant, Robin tends to keep to herself compared to her crew mates. When she does speak it may be to lend insightful or rather macabre commentary depending on the situation at hand. Much of the time she’ll privately entertain childish scenarios while maintaining a serene expression on her face. She feels no qualms in resorting to violence to achieve her goals and may habitually spy on others using her powers. As she values the knowledge that can be gleaned from the past, nothing angers her more than the destruction of priceless artifacts.

Due to the frequent betrayals she suffered during her time as a fugitive, Robin was initially distant with her fellow Straw Hats. As she grew closer to her comrades, she became anxious her presence would only endanger them; her encounter with CP9 only furthers to serve as confirmation of her fears. She despairs of ever regaining their acceptance. Once the Straw Hats declare she is always their comrade, she regains her will to live and is forever grateful to be a Straw Hat.

: Hands sprout from the ground and pop enemies up. Then two enlarged pairs of her hands appear and smash downwards with clasped fists. Another pair of enlarged hands pop up and launches the enemies in a table-flipping motion.

: Hands sprout up in a horizontal line on the ground, and travel forward while continuously slapping, pushing enemies back. Then two enlarged pairs of her arms appear and smash downwards, while finishing with a table-flipping motion, similar to her

: Hands sprout up from the ground around Robin in a circle. They than all push away, knocking enemies back as a crowd control tool.

move, but with a smaller hitbox and delayed startup.

: A circular field of her hands sprout up from the ground in front of her. Then then flail upwards twice, launching and juggling enemies. They then disperse outwards, knocking enemies back, similar to her

: "Hang": A chain composed of multiple arms linked together sprouts up from the ground and grabs a single enemy. It then proceeds to slam that enemy into the ground 3 times in 3 different spots around it, with each having an area hitbox that damages other enemies. It then throws the grabbed enemy forward.

: Two enlarged versions of Robin's arms appear in front of her, to her left and right side. They then slam down simultaneously onto the ground 3 times, dealing damage.

Level 1 Musou: "Cien Fleur: Delphinium": Robin crosses her arms and a corridor of her sprouted arms appear from the ground in a line in front of her. They then do slapping motions down the line, pushing enemies back and knocking them away.

Level 2 Musou: "Dos Fleur: Grab": Robin crosses her arms and a pair of her arms will sprout from the thighs of the nearest single enemy. She will then squeeze her fists, causing the two arms on the enemy to grasp and squeeze their testicles, dealing heavy damage. If used on a female enemy, she will instead use her arms to form a chain to bind her, while another arm appears behind the enemy and spanks her bottom multiple times, dealing heavy damage.

R1 (Special Skill): "Seis Fleur": Robin's hands sprout up from the ground and grabs a single enemy, binding them and restricting them.

Taunt: Robin will tie her hair into a ponytail and put her sunglasses on. Taunting again will reverse it back to the default appearance.
In her Miss All Sunday outfit, she will take her cowboy hat off, or put it back on.

: Multiple hands sprout out from the ground and slap to the left, then slap to the right. Then a semicircular line of hands sprout out and slap outwards. Hands then sprout in two rows in front of Robin, slapping towards the front. A clone of Robin appears for the last hit, adding more arms to the attack.

: Cuatro Manos (Shock): Similar to pre-timeskip Robin, except a clone of her appears for the first hit, doubling the amount of arms and extending the hitbox to a wider area.

: Mil Fleur (Hanagasa): A circular group of hands appear from the ground, and pop the enemies up.

: Cuarenta Fleur (Spank): Robin crosses her arms and does open palm thrusts to both sides. A corridor of enlarged versions of her hands sprout from the ground in front of her, mirroring her movements, thrusting down the line to knock back enemies.

: Similar to pre-timeskip Robin, however an additional pair of arms join in on the slamming portion, covering area behind Robin as well.

Level 1 Musou: "Mil Fleur: Gigantesco Stomp": Two enlarged versions of Robin's legs emerge from the ground in front of her. They then proceed to stomp down on the area around them multiple times, dealing wide area damage.

Level 2 Musou: "Dos Fleur: Grab": Robin crosses her arms and a pair of her arms will sprout from the thighs of the nearest single enemy. She will then squeeze her fists, causing the two arms on the enemy to grasp and squeeze their testicles, dealing heavy damage. If used on a female enemy, she will instead use her arms to form a chain to bind the enemy, while another arm appears behind the enemy and spanks their bottom multiple times, dealing heavy damage.

R1 (Special Skill): A clone of Robin will sprout in front of her, which produces multiple arms that spin around like a pinwheel for 2 seconds before disappearing. This acts as a shield and will block enemy attacks for the time that it is active.

Nico Robin ate a Devil Fruit called the Flower-Flower Fruit, which is a Paramecia-type fruit that gives her the ability to sprout and grow any of her body parts out of any surface (except for Seastone). She most commonly uses this for her limbs to extend her reach and for combat purposes, but the fruit can also be used for reconnaissance and espionage by sprouting multiple ears and eyeballs in various locations. The fruit allows Robin to create body parts bigger than their actual sizes, and she can even create clones of herself. Robin is considered to be one of the stronger members of the crew. She is agile and well-suited to taking on large numbers of foes due to her Devil Fruit's ability. There are no known limits to the distance she can place her body parts or the number she can duplicate. She will, however, share the pain these cloned limbs feel should they suffer any damage. She generally will multiply her arms on either herself or others to grapple and restrain her opponents in a fight. Other than restraint, Robin's fighting style revolves sprouting multiple numbers of her limbs and using them to smack enemies around. 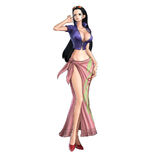 Dressrosa costume
Add a photo to this gallery

Retrieved from "https://koei.fandom.com/wiki/Nico_Robin?oldid=439012"
Community content is available under CC-BY-SA unless otherwise noted.