Nobunyaga Oda (織田のぶニャが, Oda Nobunyaga) is the titular character of Nobunyaga no Yabou and Guruguru Dungeon Nobunyaga. Since the game's inception, he became a costumed mascot for Koei-Tecmo Holdings with the most prolific public appearances to date.

He was often paired with Nyabraham Linnyahn during early public appearances. Date Masiamune, Utsunomiyah Kunitsuna, Siamzu Yoshihiro, and Ishida Mitsunyari have since joined him for events. Company representatives commonly address him Lord or Milord (殿, tono) when he is present.

Guruguru Dungeon Nobunyaga has him dying repeatedly throughout its main narrative, especially during his early takeover of Owari. The time loops created by Nyan no Rikyuu's magical tea bowl and Masami's contemporary knowledge of Japanese medieval history help prevent many of Nobunyaga's premature deaths. Nobunyaga eventually becomes aware of the time loops by overexposure to the time portals and by reading Masami's facial expressions. He is determined to create his own future, by his own paw, especially when the magical tea bowl cracks. While he continues to request Masami's consultation in his campaigns, Nobunyaga trusts his strategist to keep quiet about the tea bowl and to watch over him. He soon excels in his leadership and history proceeds on its "proper" course.

In Warriors All-Stars, he is summoned by Tamaki as one of the many warriors to fight for the land. Only to join Setsuna's faction and become his second in command.

Default Nobunyaga no Yabou card (base for mascot image) is Ultimate class. Here is the starting data for the card.

Players using the Tenka Fubu fire spell can briefly see him hovering over the field during its activation animation.

Furusawa commented that the team felt obligated yet reluctant to include Nobunaga in Warriors All-Stars due to his immense presence in the company; they feared that favoring one Nobunaga over the others may have been seen as a contentious decision. Nobunyaga was chosen because he honors the historical figure but is "just different enough" to distinguish himself as his own charming entity. The kitty daimyo also falls in line with the surreal undercurrent that the developers wanted to have for the dream project.

Takeuchi, Nobunyaga's voice actor for Warriors All-Stars, struggled to act as a serious character when his character looked "adorable". He thinks his character's mustache is unique and expressed his wishes to spend time with his character.

Nobunyaga is touted as an extraordinary visionary who dreams of seeing the world. While he is a military and political genius, the kitty lord is aloof and independent. Nobunyaga sometimes has no shame regarding his public image, letting himself be photographed when he is dead tired. He loves the attention he receives but nonchalantly devalues his own talents by claiming himself to be a simple cat. Nobunyaga likes modern culture and technology yet he is too lazy to manage his own Twitter account, choosing to leave it in Nyaraki's hands. He has a short fuse once offended, often seeking to physically punish whoever insulted him.

In the Sengoku Nabe animated shorts, he prides himself to be a trend setter who is proficient in everything. Nobunyaga adores his wife and page. Nohime-nyan's different outfits are canonically due to Nobunyaga's insistence for her to play dress up, much to his wife's dismay. Nobunyaga once called Nyanmaru to his side to join him in a romantic duet (which is a parody of Sengoku Nabe's Nobunaga to Ranmaru musical skit). He proclaims Misuhuide to be his trustworthy friend only to diss him at any opportunity.

: Nobunyaga throws two fish fans around him to create a tornado around him.

: Six samurai cats appear in front of him in a horizontal line, then they all shoot a shot forward.

: Nobunyaga leaps up and shoots a large cannonball shot to the ground, which detonates.

: Five samurai cats appear and surround Nobunyaga with their rifles pointed outwards. They then all fire a shot each.

: Nobunyaga does an early celebration dance with six other samurai cats, with confetti falling.

: Nobunyaga commands six samurai cats to run forward, charging with their spears, bulldozing any enemies in their way.

: Nobunyaga shoots a single bullet that ricochets off the ground, then shoots 3 more simultaneously that do the same.
Jump +

: Nobunyaga shoots a single bullet to the ground, which ricochets off the ground.

: Nobunyaga commands three rows of samurai cats to appear in front of him, with 3 cats in each row. The first row shoots a volley of shots, then the second row moves up to do the same, followed by the third. One last cat gets his rifle jammed and after fiddling with it, he shoots out a large blast of fireworks.

Hero Skill
Quick Reload: attacks enemies in front of him. Can potentially reduce cooldown for Hero Skills.
Dai-Rokuten Maoh: increases attack. Enemies hit by his attacks will be slowed.
Awakened Skill
Combined Skill
Hook and Sinkerrr (with Horō): Horō throws a grenade while Nobunyaga orders it to be shot with his kitty soldiers. Lowers the cooldown rate for Hero Skills.

Nobunyaga has been the company's mascot for several historical festivals in Japan. He also appears at Tecmopia, the company's booth within various game shows, and in the lobby of select voice actor events. 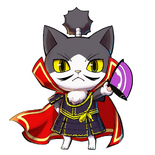 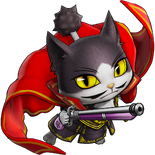 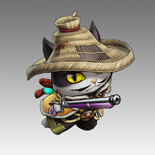 Tokitsugu downloadable costume
Add a photo to this gallery

Retrieved from "https://koei.fandom.com/wiki/Nobunyaga_Oda?oldid=419752"
Community content is available under CC-BY-SA unless otherwise noted.