Nuwa (onyomi: Joka) is a serpent goddess in Chinese mythology who is the sister and wife of Fu Xi. She is often accredited to have given the gift of earth and rope-making to humanity. Nuwa is also known to have repaired the heavens once it tore away from the land, effectively healing the sky and the earth itself.

Like Fu Xi, she is only available in Free Mode during her Dynasty Warriors debut. Her character revamp for the Warriors Orochi series is considered her permanent Warriors counterpart. She uses the same attire, voice, and persona for her later appearances in the Dynasty Warriors series.

Before 2012, Koei titles separated the Chinese characters for her character's name and called her "Nu Wa". Her given name as a deity is now properly localized in the games.

"Even goddesses envy your beauty!"

In Orochi's scenario, Nu Wa first appears in the world with Fu Xi and Taigong Wang to stop Orochi. With the other mystics, she acts as one of the army's secondary leaders. In the end, the trio are defeated and forced to recuperate.

During the main story in Warriors Orochi 2, she has already made herself an honored member of Wei's forces. Whilst in their ranks, she tests Cao Cao's leadership and worries about his growing ambition. Her concerns are put to rest once she realizes that he is more human than she previously thought. She entrusts the fate of the land into humanity's hands.

She has an additional dream stage with her mystic comrades in Musou OROCHI Z as they face the heroes from both time periods at once to prove the might of mystics. During the battle at Chi Bi, she gladly faces Zhao Yun and Yukimura's charge, impressed by their fierce bravado. She also shares some words to Cao Cao regarding the inner strength found within humanity.

Content to leave humanity to their fate, Nuwa returned to the mystic realm after Orochi's second death. Sensing the serpent army's reemergence, however, she returned to assist Cao Cao in his anti-Orochi resistance. When Aya and company explain the necessity of siding with Da Ji, the mystic willingly aids their cause. She and Fu Xi later lead the charge to oppose their leader Susano'o. After Orochi's final demise leads to the destruction of the world, she and the other mystics transport humanity back to their proper eras.

In the downloadable stage, "True Love", Nuwa and Nezha are taught above love by Aya as they battle warriors who show love in different forms.

Upon discovering an Ouroboros Bracelet in the Mystic Realm, she and Nezha handed it to Nobunaga and ordered him to "play villain" in order to test the coalition army's resolve to fight the gods in Warriors Orochi 4. They were then attacked by Ares's army at Fan Castle before Susano'o came to their aid. Sensing Kaguya's presence in the new world, she asked the coalition to rescue her.

Nu Wa offers a quest for her weapon in Dynasty Warriors: Strikeforce. She is an optional playable character in Shin Sangoku Musou Multi Raid 2 once players have accumulated enough Community Points to purchase her. The same game includes a bonus downloadable scenario in which she and Fu Xi test humanity's power.

She later acts as one of the star characters for the Kunlun Mountains update in Dynasty Warriors: Online, as players can obtain parts of her costume for their avatars as well as her weapon.

Originally implied to be a cheerful and optimistic individual, Nuwa is a suave and composed woman of grace. Not willing to disclose herself to others easily, she is proud of her immortality and condescends any who stand against her. In time, she finds humans to be amusing and believes in their capabilities.

Aside from her fellow mystics, Nuwa imparts special praise to Cao Cao and his son for their cool-headed efficiency. By contrast, she regards Da Ji and Kotarō with disdain. Though her dignified demeanor is admired by many, some of the more prominent women view it as arrogance. She also clashes with Susano'o whom she deems as stubborn and narrow-minded in regards to humanity.

Nu Wa's weaponry in the Dynasty Warriors series follows the same naming motif as Fu Xi's, meaning that their weapons' names are nearly identical. This likely follows an idea of her entry from Records of the Grand Historian. In this account, Nu Wa is not particularly specified to be a woman, Fu Xi's younger sister, or his wife. The ruler was a righteous and moral person from the Feng family. Replacing Fu Xi's rule, the person is renamed Nu Xi whilst named emperor. Everything was continued as though it were still Fu Xi's reign aside from Nu Xi's introduction of music to the people. Nu Xi's accomplishments were considered high and a match for the Three Sovereigns. Within mythology, however, Nu Xi hardly exists and is adapted as a lady provider, repairer, and a mother of humanity. She is usually seen beside Fu Xi in Chinese creation myths.

"Foolish mortal. Your stupidity is exceeded only by your girth!"

"Yes, Lady Nuwa. I wanted to greet the humans as an old friend. I wanted to relive the memories of our battle against the giant serpent, and see how everyone had fared in the time since. I was looking forward to our reunion."
"...Yes. But do not be downhearted. It is true that we have lost the bonds that once tied us. But we can forge those bonds anew."
"Lady Nuwa..."
"The humans taught us how to make friends, didn't they? It would be a waste for us not to put those skills into practice."
"Yes! Thank you, Lady Nuwa."

: Stabs forward for a stunning blow.

): Slashes upward, then can followup with a meteor slash.

: Rapidly stabs forward per input, then performs a rushing thrust as the finisher that inflicts crashing knockback.

: Swipes her rapier in mid-air.

: Nu Wa leans to each side, and swings her weapon.

: Three attacks to the right side, three to the left.

: Repeating slashes to all sides until the Musou gauge empties.

Moveset remains the same with the following additions:

: Flips in midair for a falling sword-plant quake.

Moveset remains the same with the following additions:

: Revolves twice with the sword to her chest horizontally.

: Rapidly flails her rapier sideways, then ends with the original spinning slash. True Musou version ends with Nu Wa rising her sword up afterwards for a lightning storm.

: A charge head-first into the ground that emits a flashing quake upon impact.

Bow moveset from previous titles has been removed.

: An airdash that makes her temporarily invincible. Nu Wa pushes herself forward.
R1: Nu Wa pierces her rapier forward quickly and continuously, firing ice darts that freeze.
direction + R1 : Hovers a bit and summons a hail storm with a spell.

Character type changed from Speed to Power. Loses the ability to air dash and gains a new Type Action.

: Same as before, but now styled as a Mystic-Musou Attack, lasts for a set duration and always uses his True Musou finisher. The finishing flailing slash just before the lightning storm finisher also activates weapon attributes/elements.

R1: Leaps up into the air, then rapidly jabs her rapier downward to rain down a hail of ice upon the enemy. Naturally activates elements per blow.

, R1 (Ultimate only): Sword-plants the ground from midair and waves sword up to summon an array of lightning bolts.

Nu Wa mainly uses the rapier moveset in this title.

Nu Wa fights using a rapier and as such most of her strikes are very fast, very precise stabbing motions; with a few slashes in-between combos. The result of this is a great character for dueling, but with wide openings in crowd control. On top of this, her combo strings are very linear and prone to missing without proper aim and careful timing thanks to a rather narrow striking zone. However, with time and mastery of these nuances, she becomes a force to be reckoned with. Nu Wa's moveset is also available for edit characters.

Using a combination of her R1 specials and air dash ability, Nu Wa can unleash very long combos in Warriors Orochi 2. Though she loses much of her extra mobility as a power type character in Warriors Orochi 3, her quick but light attacks benefit from the hyper armor effect. Her R1 attack combines her specials from previous games. 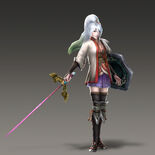 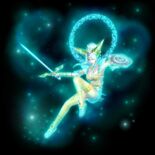