Okatsu (お勝) is one of the romanticized names for one of Ieyasu's concubines, Eishōin. She is fabled to have donned herself in armor to ride beside him during the Sekigahara and Osaka Castle campaigns.

In Saihai no Yukue, her height is 157 cm (almost 5'2") and she is 18 years old. She likes to do anything that Ieyasu favors, be it an activity or a cuisine.

In Kessen, Okatsu is a kunoichi who is rumored to be one of Hanzō Hattori's descendants. She loyally attends to Ieyasu and is by his side at all times. Although she never personally takes to the field, she is keen of the war's situation and reports valuable information to her lord. She additionally acts as his personal bodyguard and will defend him when he is faced with immediate danger. If Ieyasu's army falls in battle, Okatsu will kill the soldiers closest to Ieyasu before requesting for him to retreat. Should Ieyasu be forced to commit suicide after his last defeat, she will solemnly pay her respects at his grave.

A younger Okatsu resumes her role in Kessen III. She is introduced when Ieyasu and Nobunaga formerly make an alliance with one another at Gifu Castle. Although Nobunaga was on guard by her presence on the ceiling, she amuses him by saying that the castle's defenses were easy to infiltrate. From then on, she serves as an aide for Ieyasu and eventually leads her own unit in battle. When Nobunaga is presumed dead after Honnoji, she is the one who suggests for Ieyasu to take over their lord's ambition.

Her brief description for the pachinko machine identifies her as Ieyasu's lover and kunoichi. Any mention of her relation to Hanzō has been discarded.

Nioh Okatsu is one of Ieyasu's daughters and Nobuyasu's younger sister. When she was younger, her mother and older brother were executed to protect Ieyasu's honor, causing Okatsu to hate samurai. Refusing a political marriage to obtain her freedom, she decides to train under Hanzō as a kunoichi.

Okatsu first meets William at a party hosted by Kanbei, initially dismissing him as a "drunk samurai" when he tries approaching her. She begrudgingly accompanies William and her teacher on their journey. After defeating Ogress, she comes to accept William for his kind heart. She leaves the group to avoid meeting her father in the capital.

In Edo she is placed under a mind control spell by Edward Kelley and confronts William. Once she is defeated, Kelley captures Okatsu and demands for Ieyasu to give his life to save his daughter. Ieyasu's harsh refusal stuns Kelley long enough for Okatsu to free herself, but she accidentally falls off the nearby balcony. William saves Okatsu from plummeting to her death. She then accompanies William and Hanzo to a rebuilt Azuchi Castle, but the ninja are separated from William by a collapsing bridge. After William defeats Kelly, she's clearly hurt over William leaving for England.

Before they reach Kobanyagawa's headquarters, Okaji-nyan's group accidentally crosses paths with Ōtanii's troops. The Tokunyawa unit beats him back enough to withdraw. When the protagonist inquires if they pursue, Okaji-nyan respects their foe's devotion to Mitsunyari too much to make the call. She makes the excuse that can't afford the resources for a chase. Later, when Ōtanii dies fighting Takadora's troops, Okaji-nyan is sympathetic enough to have a moment of silence for him.

Okatsu no Kata appears in Saihai no Yukue as Ieyasu's loyal wife. She wears armor decorated with hearts and fights with a sword. Her unbridled confidence helps her gather more men to fight for the Eastern Army. Cheerful and spirited, she bullies Tanaka to fight alongside her. Though she rides into battle with great zeal, her morale will falter if she's hit. Fearing that an injury could somehow lower her appeal to her husband, she usually flees soon after.

Her Nioh incarnation was physically based on her voice actor Emi Takei. Takei doesn't have much acting experience with period or action roles, so she struggled throughout the recording process. Since her character is a "cool" type, Takei couldn't have her pitch too high and she couldn't rely on her body language for her recordings. The balance between Okatsu's strong front and feminine traits was another challenge for her to consider, but Takei hopes that these aspects of her role shine in her performance.

Nioh Okatsu refuses to accept Ieyasu as her father and prefers his derogatory nickname, "tanuki".

"The lady's name is Okatsu."
"Your defenses are weak. Lord Nobunaga is quite bold. But... you do stil have some rough spots."
"Hahaha, I am glad that you are not my enemy, Ieyasu."

O-Katsu no Tsubone was a woman of relatively unknown origin. She was either Ōta Dōkan's adopted daughter, Tōyama Naokage's daughter, or Edo Shigemichi's daughter. There are also tales that say she shared a brother-sister relationship with Dōkan. Various theories state that she could have been Tōyama Tsunakage's daughter or younger sister. Her other names include Oha (於八 or お梶) and Okatsu.

Many people believe that Ieyasu met her around the time he first settled in Edo. Due to her status as his concubine, her age when they met isn't recorded but some historians postulate that she could have been in her early teens. The two met due to her older brother (from either the Ota or Toyama clans) reaching a higher classed status. Tenkai then recognized her intelligence and recommended her to Ieyasu. His lord was pleased with her charming wit and fell in love with her quickly. She was going to be married to his son, Matsudaira Masatsuna, but presumably canceled his plans when she became pregnant.

In 1607, she gave birth to Ieyasu's last child -his sixth daughter- when she was thirty. Ichihime was promptly engaged to Date Masamune's heir, Toragikumaru. Unfortunately, she died at the young age of four. Not wanting to spread misfortune, Ieyasu sent one of his grandchildren, Toramatsu, to be adopted into the Date family and asked Furihime (Ikeda Terumasa's daughter) to be his foster mother. After Ieyasu's death, she chose to live as a nun, changing her name to Eishōin, for the rest of her days. She died under Tokugawa Iemitsu's protection when she was 65 and was buried at Ensho-ji Temple. A few observers state that her ties to the Tokugawa family elongated her family's legacy until the Meiji Restoration took place.

Since Ieyasu is believed to have truly loved Oha, there are a few stories surrounding her and her lord.

In one tale, Ieyasu spontaneously asked his vassals what was the most delicious food. While everyone present gave their own unique answers, Ieyasu turned to Oha and asked for her response. She quaintly said salt and, when pressed for why she chose it, responded, "It seasons the taste to any meal." Ieyasu then asked what was the worst tasting food and she gave the same answer. Her explanation was "Because too much salt can simply ruin a meal." Her answers pleased her audience and lightened the mood of their gathering.

She was also said to have dressed as a man and fought during the Battle of Sekigahara and the Osaka Campaign. Known under the name, Okatsu no Kata, she stood as an inspiration for her husband. Since she wasn't technically a noble woman by her status, no direct harm would come to her husband if she were killed or captured. Though she was eventually held hostage within Osaka Castle, she escaped and rode back to Ieyasu from horseback.

A few people speculate that she was a proud supporter of Lady Kasuga. After Ieyasu's death, there were few other remaining noble women yet there were still children who needed to be raised. Since she sworn as a nun, she gladly accepted Lady Kasuga. She was very courteous to her and accepted her quickly as a part of the Tokugawa family. 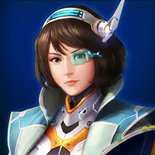 Okaji-nyan in Samurai Cats
Add a photo to this gallery

Retrieved from "https://koei.fandom.com/wiki/Okatsu?oldid=444986"
Community content is available under CC-BY-SA unless otherwise noted.