Ou Xing (onyomi: Ō Sei) is a rebel who is only known historically for his attempted invasion of Changsha. The self-proclaimed general led a force of 10,000 men for his attack in October 187. Sun Jian, the newly appointed Prefect of Changsha, led his troops to subjugate him and Ou Xing fell in one month's time. Ou Xing's death, along with the subjugation of the Lingling and Guiyang riots, was one of Sun Jian's early claims to fame.

Romance of the Three Kingdoms depicts him as a notorious bandit leader who raises his army after the Yellow Turbans' fall. The novel insists that it was the Ten Eunuchs who ordered Sun Jian to subjugate Ou Xing. The rebels were quelled within fifty days.

His actions roughly mimics another insurgent named Guan Gu. It's unknown if they had any relation to one another or if their simultaneous revolts are purely coincidental.

He first appears in Dynasty Warriors 5: Xtreme Legends during his rebellion in Chang Sha. Sun Jian, Sun Ce, and Huang Gai opposed him. Little did they know was that he had hired remnants of the Yellow Turbans. Once some of his henchmen are cleared away, Ou Xing will try to lock the gates to Chang Sha. Huang Gai sneaks into the castle and unlocks the gates from within; he panics when Sun Ce captures the rear gate. Realizing he cannot win, Ou Xing tries to flee but is killed.

Dynasty Warriors 6 has him appear at the Conquest of Wu, where he leads an ambush unit in the southern part of the map to fight Sun Ce's forces. He also appears at Shi Ting to take on Lu Bu's army. In both scenarios, Ou Xing fights under Yan Baihu, Wang Lang, and Liu Yong.

In Dynasty Warriors 7, Ou Xing starts his rebellion after Sun Jian's encounter at Liang Province. Promised to become Changsha's prefect as a reward, Sun Jian brings his warriors and one of his sons, Sun Quan, to quell the rebellion. In the early rebellion stages, Ou Xing's henchmen lure Sun Shang Xiang into a trap. He will also send a messenger out for reinforcements. After trapping Sun Ce in the northwest garrison, Ou Xing has his men set the fort on fire in hopes of killing him. Once his guard, Guo Shi is slain, Ou Xing's camp will be defenseless. After a quick duel, Ou Xing is killed by Sun Quan.

Ou Xing first appears as a minor general for hire in Romance of the Three Kingdoms VIII. His high war stat is his best asset; the rest of his stats suffer. Some scenarios in the later installments may feature him leading his own force in Changsha. 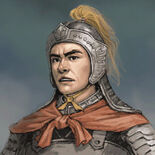 Romance of the Three Kingdoms: The Legend of Cao Cao portrait
Add a photo to this gallery
Retrieved from "https://koei.fandom.com/wiki/Ou_Xing?oldid=431726"
Community content is available under CC-BY-SA unless otherwise noted.