Portgas D. Ace (ポートガス・D・エース, Pōtogasu D. Ēsu), also known as "Fire Fist" Ace (火拳のエース, Hiken no Ēsu), is commander of the 2nd division of the Whitebeard Pirates and the adopted elder brother of Monkey D. Luffy. He was later revealed to be the son of the Pirate King Gol D. Roger, named Gol D. Ace (ゴール・D・エース, Gōru D. Ēsu), and took his mother's surname Portgas after the death of his father.

When one of his subordinates, Marshall D. Teach, killed another crew member, Ace swore to hunt him down only to lose track of him and was eventually handed to the World Government after losing to Teach in a duel. Ace was sentenced to death which resulted in the Marineford War, an event that took the lives of both Ace and Whitebeard. Players can unlock him in the third game's Dream Log Mode.

Ace is an intelligent but sometimes impatient young man who always treasures his friends. He treats Whitebeard as his father and the Whitebeard Pirates as his family. He also cares about Luffy to a great extent. He is also somewhat narcoleptic, a trait that became one of the many running gags of the series.

: Ace punches forward, releasing a small fire blast. He then creates two small waves of fire on the ground by waving both hands in succession. He then releases a barrage of rapid-fire flame punches, before finishing by punching forward, releasing a large fire blast from his fist. The final input can be charged for a bigger blast.

: "St. Elmo's Fire": Ace does a back-flip kick to knock enemies and himself into the air. He uses both hands to hurl lance-shaped fire blasts downwards at an angle, which detonate when they hit the ground. He then proceeds to launch a barrage of smaller fire blasts at them from his hands.

: Ace slams his fist into the ground, creating four miniature columns of fire in front of him that launches enemies. He then does a backflip and lunges forward at the enemies, before diving onto the ground creating a ring of fire that spreads out and knocks back enemies.

: "Firefly": Ace points both palms forward and releases a swarm of green-glowing fireballs, which resemble fireflies. The fireballs then home in on enemies and detonate on impact. This move can be charged for bigger fireballs that deal more damage.

: "Flame Commandment~Fire Pillar": Ace waves his left hand in front of him in a sweeping motion, creating a stream of flames on the ground. He then spin-jumps upward surrounding himself in a spiral of flames, before landing on the ground and placing both hands on the ground and erupting a fire pillar from his body that shoots upward. The fire pillar can be charged for a bigger pillar.

: "Fire Gun": Ace points both his hands forward like guns, and starts to shoot a rapid-fire barrage of fire bullets from his fingers. He finishes by firing a single large blast from one hand. The finisher can be charged for a larger blast. Ace can be pivoted while firing the bullets with the control stick.

: "Flame Fence": Ace creates a large ring of fire on the ground in front of him. A large fire pillar then erupts from the center of the ring, blasting enemies away. He finishes by firing a large fire blast forward from his hand. The first hit can be charged for a bigger ring and larger following hits.

: Level 1 Musou: "Fire Fist": Ace's signature move and inspiration for his moniker. Ace winds back his fiery right hand for a punch and then punches forward, unleashing a large fire blast that travels straight forward, taking out enemies in its path.

: Level 2 Musou: "Flame Commandment: Flame Emperor": Ace strikes a pose and summons fire energy around him, which can damage enemies. He then materializes an extremely large ball of fire above him, resembling a miniature sun. He then hurls it forward at enemies, which detonates when it hits the ground, dealing great area coverage.
R1 (Special Skill): This is a command grab. Ace turns into his fire form and swiftly glides forward and grabs a single enemy. Once in his grasp, he unleashes a large explosion from his body.
Taunt: Ace either removes his signature cowboy hat, or puts it on.

: Creates a small wall of fire in front with a wave of his left hand, then shoots forward 2 fire blasts with successive left and right punches. Creates another stream of fire on the ground in front, then punches forward to shoot a fire blast forward. Does a right hook to create another fire stream, then unleashes a flurry of punches to shoot a volley of fire blasts. He finishes by kicking upwards with his left leg, shooting a large fire blast forward.

: Points his finger forward like a gun and shoots a large fire projectile. Can be charged to fire the projectile farther.

: Points both hands forward like guns and shoots a volley of fire bullets. Can be charged to fire the bullets for a longer period of time.

: Waves his right arm upward to create a large column of fire that lingers and juggles enemies in it. Can be charged for a bigger column that lasts longer.

: Places his hand on the ground and detonates a large explosion. Charging it will add an additional 2 explosions.

: shoots forward a cross-shaped fire projectile. Charging it will increase the size and travel distance.

: Does a short hop in a column of fire, then lands and places both hands on the ground to release a fiery blast around him. Charging it will summon a large fire circle around him and increase the size of the blast.

: Summons a large ball of fire in his hand and hurls it forward. The ball travels forward quite a distance, and then detonates a large explosion. Charging it will increase the fire ball's size.

: Releases green fireballs from his hand that resemble fireflies, then charges forward.

: Divebombs to the ground to erupt a large fire pillar. Charging it will increase the size of the blast.

: Points both fingers forward like a gun and shoots fire bullets forward. Charging it will increase the duration.

: Grabs a single enemy and detonates a large explosion on them.

: Dives to the ground and erupts a large explosion upon landing. Charging it will increase the explosion's size.

: Hurls 2 fire projectiles at the ground, creating a large explosion on impact.

Note: These skills are placed in order of the "Special Move Set" menu.

Ace ate the Flame-Flame Fruit, a Logia-type Devil Fruit which allows him to become the embodiment of the element of fire. He can turn his body into fire, as well produce a limitless amount of fire and manipulate it. By turning into fire, Ace can avoid harm from conventional physical attacks, as they will simply just pass through his intangible fiery body. He greatly mastered his fruit's powers and became very skillful at it. Ace has a very explosive and fast-paced fighting style, as most of his attacks have a large area of effect from the fiery explosions. Some of his attack finishers can be enhanced by charging the attack. Charging the attack is done by refraining from pressing the button for the finisher until the very last moment. This is accompanied by a visual cue, where Ace will start to charge up and develop a fiery aura around his body. He also possesses Haoshoku Haki. 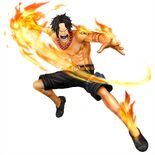