Professor is an inventor in charge of creating new gizmos and gadgets; she created Tokitsugu's robotic body and the Demon Hand used by the protagonist. She frequently studies the ruins of ancient civilizations to search for "the world's truths".

Because people are uncertain of the Machina, which ranges from Tokitsugu's artificial body to her creation of the Demon Hand, she was called as the "Witch".

7 years after the awakening, Professor moved to Mahoroba Village. A year later, a huge herd of demons have attacked the west and Professor found Tokitsugu on death brink while he was surrounded by corpses of Oni. Seeing this, Professor offered him to keep on living in exchange of his body.

10 years after the awakening, the Professor finds the protagonist passed out outside of Mahoroba and ordered Tokitsugu to carry them back to the laboratory. Upon the protagonist waking up, the Professor introduces herself to them and takes them under her wing as "assistant #2" upon knowing that they have memory loss. The Protagonist is then used as a lab rat for new experiments such as the demon hand. 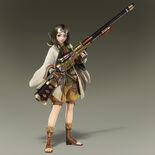 CG render
Add a photo to this gallery
Retrieved from "https://koei.fandom.com/wiki/Professor?oldid=435508"
Community content is available under CC-BY-SA unless otherwise noted.