The protagonist is a customizable avatar the player is required to create at the start of each game. Protagonists may "speak" through limited text options during story conversations, but they are mainly present to observe the drama of the NPCs around them. The first-person perspective seen in most pre-rendered cinematics is the protagonist's point of view.

Regardless of the player's choices in the story, their personality is generally described as humanistic and awe-inspiring.

Unlike the main cast, the protagonist is identified as a foreigner to Nakatsu Kuni from "eastern faraway lands". He/She has the unique power to harness multiple Mitama within themselves. It is revealed late in the main story that the protagonist was specifically chosen by the departed heroes to act as their gateway to the living. They wanted at least one person who could clearly hear them and prevent the destruction they experienced in their previous lives.

He/She begins as a new recruit to Utakata Village. The youth quickly earns his/her keep by completing various missions and gradually becomes a trusted defender of the village. When the demons intensify their efforts, the other Slayers devise a plan to stop the source of the horde and promote the protagonist as the captain of their forces. They rely on the protagonist's power to converse with the Mitama within him/her and Kikka's astral projection to locate the head demon.

The danger surrounding the village is eventually adverted, but it quickly becomes apparent that the demons' seek to create another dimensional vortex. Its destructive powers would be reminiscent to the opening which nearly obliterated humanity eight years prior to the main story. Although they defeat the major demon they think is responsible, the portal refuses to close. Before they can despair, the protagonist calls upon the souls of his/her comrades and use their bonds to close the gate. Their act leads to their new title as the legendary "innovator" (ムスヒ), or the "demon" who can seal demons away.

His/Her actions propels him/her into celebrity status over night, their exploits rippling throughout the Slayers' world. Not everyone knows his/her name, only that he/she is residing within Utakata Village. Three months later, he/she meets Obito in a dream. He/She agrees to help him on the side, periodically conversing with him when they sleep. Horou becomes attached to him/her shortly afterwards. He/She helps her adjust to the village.

Meanwhile, the northern forces are falling to a threat dubbed the "Eclipse Demon", an incorporeal entity that can instantly summon endless waves of giant demons. The Sacred Mountain barrier priestess cannot locate it with her powers but has felt it towards the center of the continent. As captain of his/her village's Slayers, the protagonist is ordered to work with the northern forces visiting Utakata Village in an effort to find and exterminate the menace.

While on a hunt in Chaos, Reki is attacked and clings to a cliff. The protagonist attempts to save her but falls into the gorge with her due to the attacking them Oribe. They come to in uncharted caverns within the region and decide to wait for their comrades to find them. Reki soon becomes feverish from an infected injury. Hoping to find a cure, the protagonist searches their surroundings and meets Kyokai. From her, he/she finds an herb and she creates a remedy to heal Reki. After his/her comrade is cured, they are reunited with their comrades while defending themselves from an Itenami.

After many difficulties, the "Eclipse Demon" is eventually revealed to be parts of Izuchikanata, a wandering arcane evil that has been destroying and distorting humanity's history for one thousand years. The Slayers within Utakata attempt to locate it, but they fall victim to the demon's miasma. The protagonist nearly loses his/her ties to the mortal realm until Horou and Obito restores them. With their help, he/she saves the other residents and Slayers. The unified group slay Izuchikanata within its own dimension of time.

The demon's corruption is removed from certain gaps of time and space yet demons still remain within Nakatsu Kuni.

This protagonist is a faceless and amnesic player avatar. He/She rarely speaks except through text prompts. Certain responses suggests bias for a male protagonist though a clear gender for this protagonist has not been clarified within the script. Since they meet a lost Hatsuho, they come from a different time era from the other protagonists.

He/She comes from a mysterious background and awakens within the ruined Akatsuki Village. They meet and agree to help Lady Akatsuki. This protagonist is too weak to wield any of the weapons used by the main series' protagonists, yet they somehow have the rare ability to harness multiple Mitama. He/She uses the souls to defend themselves and to exterminate demons. They do so to nurture the tree spirit.

When he/she collapses and is taken in by Utakata Village, Hatsuho convinces her friend to become a Slayer to aid their quest. Yamato is reluctant to enlist them due to their lack of combat experience, putting him/her on apprentice status. He/She is expected to pass the three trials for Slayer trainees before active duty. Ouka, Ibuki, and Nagi are his/her mentors for each respective stage. He/She completes his preliminary trials and is put on missions under Fugaku and Hayatori's supervision. The veteran slayers approve his/her courage but appear to be troubled by his/her power and unknown origins. They believe that their visitor could be the legendary Innovator.

The Slayer protagonist was once a youth who fought during the "Awakening" at Shinonome Village. They share the name of a legendary weapon creator who was said to have been devoured by the demons.

During the fighting of the "Awakening", they suffer a grievous injury and nearly perish. Botan's soul cries out to them and bonds with them, restoring the protagonist's injuries. Botan then becomes the protagonist's bonded Mitama. While most of the north has fallen to the demon horde, Shinonome has beaten the odds and remains standing eight years later. The protagonist is now a commander to their own Slayer unit who continues to defend their post. Unlike other protagonists, this protagonist cannot bond with multiple Mitama. They can hear and work with other Mitama only because Botan acts as their constant conduit.

After they find and rescue Ōka and Ibuki, the village authorities contemplate the possibility of starting a southern expedition to hasten their comrades' return to Utakata.

This protagonist is a Slayer who fought in the "Awakening" near Yokohama. Kuyou led their squad, but the protagonist is separated from their unit after they are knocked out by a demon. Their unconscious body is found by Professor and Tokitsugu within the forest near Mahoroba Village, a village west of Utakata. Through their caretakers, the protagonist learns that ten years have passed since Yokohama and that they have no memory of their life before their otherworldly trip. The Professor offers them housing in the Slayer's spare warehouse and uses them as a guinea pig for her Demon Hand invention. Due to the current civil strife within the village, she lies that the protagonist is her new assistant to avoid rousing suspicion about their true origins.

Players can decide their character's name, gender, face structure, hairstyle, skin tone, and voice at the start of each game. These factors give no additional stat bonuses and are purely for cosmetic effect. There are twenty variations for face, hair, and voice; a color dropper is used for color editing. Players can continue to change their character's hairstyle any time during the game in their protagonist's house. 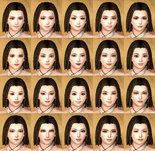 Female face set
Add a photo to this gallery

The protagonist's weaponry and armor can be altered at the player's whim. Currently equipped weapons are present on the character at all times. Armor increases defensive stats and changes a character's overall appearance in the game. Head wear, body armor, gauntlets, and leg armor are individual parts; they can be mixed to the player's preferences. Equipment can be altered at the village exit or the protagonist's house. Equipment macros can be decided and named by the player if they desire to quickly swap between weapons/armor.

In the village's start menu, the player can check their protagonist's personal stats (fourth option in start menu, last option in sub menu). It serves as a quick reference of the player's accomplishments and preferences. If the player is in a team or has created additional protagonists, this feature can be used to check between multiple accounts. Seven subsections are included:

Character customization choices are taken from the first Toukiden title, though color options for skin and hair are limited to ten.

Hair color options
Add a photo to this gallery

Players can unlock personal titles for themselves by completing certain objectives in the game. These titles are present for players who wish to alter their multiplayer profile and offer no bonuses or rewards for using them.

Toukiden Kiwami male renders in revised Slayer gear
Add a photo to this gallery
Retrieved from "https://koei.fandom.com/wiki/Protagonist_(Toukiden)?oldid=433299"
Community content is available under CC-BY-SA unless otherwise noted.