Quiz Battle Toukiden (クイズバトル討鬼伝) is a Toukiden mobile spin-off. It is free-to-play with micro-transactions available for treasure orbs, which are used for limited rare gacha roulettes and other paid content.

The protagonist is named by the player. Their main goal in the game's original story is to protect Utakata Village using multiple Mitama from both games of the main series. Its narrative takes place two years before the first game.

Services ended September 17, 2015, approximately one month after the game's first year anniversary. Players who had leftover treasure orbs were refunded.

Demon extermination makes the bulk of the game. These missions are listed under a location's name and requires an allotted number of the protagonist's Energy to initiate. An avatar's maximum energy capacity is determined by their level, and levels are boosted through experience points. Energy can be restored by waiting every five minutes or by sacrificing a treasure orb for an instant full recovery. Additional hunting areas can be unlocked by clearing each location's mission list. Brief narrative segments are included before and after major missions.

After the player finishes the first chapter, they unlock the training function in the main menu. For a minimal energy fee, these mock battles grant experience and haku for completion. Rewards are based on whatever rating the player receives while competing their kill count and accuracy against other players. Each training facility can be leveled up to unlock harder sessions. Secondary rewards can be earned by developing the training arena.

Combat is generally a set of turn-based quizzes. Character order is decided by each participant's Speed stat. The player can act only if the player still has health; if their health drops to 0, they are out for this encounter. One treasure orb can be used to grant an instant retry for failed quizzes.

Once it is a Mitama's turn, the player must tap a specific genre (sports, history, culture, etc.) for their trivia question. The correct answer is concealed within four possible options; the player has twenty or fifteen seconds for each question. Right answers leads to the Mitama attacking; providing the proper solution within four seconds additionally activates a Mitama's hayafuri ability before their turn ends. Wrong selections or selecting nothing negates the player's turn. Each question has a difficulty rating.

Players are encouraged to solve every question correctly. Doing so will eventually unleash their team's powerful group attack (ムスヒノ刻, musuhi no koku). Activate it by pressing the orange circular icon on the screen. Once it is in effect, tap true (O) or false (X) to the provided questions. The player is allowed two faults before the attack runs its course; no damage will be dealt if the player fails to answer any inquiry correctly. This attack is useful against giant demons who have large health bars at the top of the battle screen. Giant demons tend to have armor coating which must be worn down with a chain of correct answers in order for normal attacks to take effect.

Experience points for the player avatar, haku, and other Mitama are rewarded to victorious player teams. Special bonuses are rewarded for 100% accuracy finishes. Cost capacity can be increased by leveling player avatars. After the January 7 update, players can complete secondary objectives for bonus rewards.

Like its base title, haku is required for strengthening Mitama. Quiz Battle requires the player to sacrifice reserve Mitama and card rarity (represented by stars on the card) determines a Mitama's peak level. Secondary nameless warrior cards are needed for awakening a card to its next level cap; specific nameless types can be dropped after finishing story missions or its designated set of daily missions. Each time a card is upgraded, its character visual experiences minor aesthetic changes. The number of changes available depends on the card's default rarity.

Players who call upon another player for assistance is rewarded 10 friend points for each completed stage. 200 friend points are required to draw from the free gacha. The paid gacha uses five treasure orbs for a single card drawing.

Every character from the base game returns. This page will only list new additions.

Pre-registration rewarded players with the Otohime soul. Participants for the game's Twitter campaign received a single treasure orb. Toukiden Kiwami includes a Kushinadahime Mitama serial code for players. Players can complete chapters within the social game for serial codes which can be used in Kiwami; these serials unlock steel for strengthening equipment. 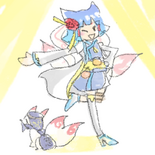 2015 New Year message
Add a photo to this gallery

Retrieved from "https://koei.fandom.com/wiki/Quiz_Battle_Toukiden?oldid=332998"
Community content is available under CC-BY-SA unless otherwise noted.