Rachel (レイチェル) is an original character created by Team NINJA for the Ninja Gaiden series. She is a half-fiend, half-human Fiend Hunter who occasionally accompanies and helps Ryu in his adventures.

"You are too magnificent to look at! I never want you as an enemy."

As she was doing her usual rounds, Rachel is suddenly sucked into a time distortion and unceremoniously displaced within the dimensional realm created by Orochi. Upon entering the newly-distorted territory of Jiangdong, she came across several remnants of Wu soldiers led by Zhuge Ke and earned their trust by helping them repel Kiyomori's demonic army. Even Lianshi and Ding Feng had been taken aback by the amount of demons she exterminated on her own. After being informed of the situation at hand, Rachel decided to join them in order to return to her own timeline.

Ultimate has Rachel join forces with Joan of Arc and Lianshi in repelling the demon troops at Nanjun. Rachel's priority in eliminating the enemy puts her at odds with Joan who is more concerned of the peasants caught in the crossfire, though the two put aside their differences to end the battle quickly.

Aside from keeping her original image from Ninja Gaiden, Suzuki replied that the development team wanted to portray Rachel as the "powerful female character". They did so by adding a little weight in her animations.

Rachel is a battle hardened warrior who feels the desire to hunt down and kill all demons. Though she feels the need to put on a tough face when dealing with people, she is a kind and caring soul whose only wish is to help people. Her cursed lineage has caused her to become a Fiend Hunter, but she truly fights to protect others.

She is a close friend of Ryu, who rescued Rachel from enemy capture multiple times while she was on a crusade to slay her own twin sister, who had become evil due to the fiend blood in her veins. While she is initially cold to Ryu, she slowly begins to trust him over time and the two formed a close friendship.

"Fiends deserve no mercy. On the battlefield, it's kill or be killed."
"Such unwavering strength of spirit... But I sense a sadness within you too."

: Strikes upward while jumping in the air.

: Spins around twice before slamming the ground to produce an explosion.

): Brutally pounds the earth, causing nearby enemies to lose their balance. EX Attack: Pulls out machine gun and barrages enemies with bullets, juggling them in the air, then jumps up into the air while continuously shooting and lands on the opposite side of them.

: Flips in the air before slamming hammer on the ground to produce a ground shockwave.
Dashing

R1: Pulls out machine gun to fire at enemies. Can be manually controlled until the attack ends.

, R1 (Warriors Orochi 3 Ultimate only): Fires several bullets at the ground below, then finishes up with a vertical swing.

: Summons thorned rose vines of darkness that violently burst, damaging nearby enemies in the process.

: Swings hammer at both sides.

: Clubs nearby enemies with hammer.

Rachel's fighting style in her Warriors Orochi appearance mainly consists of hitting opponents directly from a close distance. Her attacks, though sluggish and somewhat narrow, can cause considerable damage. As a Power-type character, she has the advantage of pulling off her attacks without being interrupted by enemy assaults which helps in harder stages. Some of Rachel's more powerful moves involve the use of her machine gun which can easily rack up large hits against a group of peons. She would highly benefit from the Blast weapon skill due to her numerous projectile and shockwave attacks. The Golden skill Echo would also help with her narrow attack range as well as boost the effectiveness of her long-ranged attacks. She also has two attacks that allow her to make good use of her jump charge.

A few of Rachel's attacks are references to her original repertoire of skills in the Ninja Gaiden series.

Rachel uses the following big star weapons in the game. 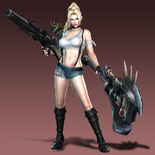