Reki (暦) is one of the main characters in the main narrative. She can fight beside the protagonist during hunts in the single player main story.

Like the protagonist, Reki was born in a district outside of the Slayer organization's influence. She lived her early childhood in the northwestern Aizu. When the demons destroyed her home ten years before the main story, Reki was saved by Rinne. Reki was raised within Shiranui Village and trained by her chief to defend herself. She suffers from survivor's guilt and inwardly blames the Slayers for robbing her of her loved ones and blissful ignorance of demons.

When the northern demon threat intensifies, Reki is ordered by her chief to infiltrate the Slayer organization and locate the enemy spy from the secret organization, Way of the Moon and Sun. Soon after she left, she approached Souma's Hundred Demon Corps unit and pretended to be dissatisfied with her chief. Reki scatters Kuyou and Souma's skepticism of her loyalties by helping them defeat a Kazenui and Onjubou. Convinced of her usefulness, she is granted official membership and accompanies them to Utakata Village.

Her first suspect is the protagonist. She fabricates admiration for him/her to search his/her home for clues. During an emergency hunt against an Oribe in Chaos, Reki is distracted by the sight of Tsuruga Castle, a lost relic of her homeland, and can't keep her eyes away from it. The demon attacks her, throwing her and the protagonist off a cliff. Lost in a maze of caverns, the duo defend themselves from a persistent demon swarm while waiting for help to arrive.

Reki attempts a strong front but faints when her injury becomes infected; her past and present anxieties plague her in her sleep. The protagonist listens to her ramblings and gives her a remedy to restore her health. She is moved by the charity and by the other Slayers of Utakata Village whom rescue them from their three day ordeal.

Feeling guilty about her lie, she comes clean to the active Slayers in the protagonist's home and asks for their help. She doesn't go into specifics regarding her mission, only that the spy threatens the future of humanity. Reki shares the number of major suspects remaining based on her chief's presumptions: Souma and Kuyou.

After Souma's name is cleared, the "Eclipse Demon" conjures a swarm of demons within Kikka's barrier. Utakata is pinned and on the verge of being overwhelmed. Reki wants to protect her new friends and leaves to ask Shiranui for reinforcements. Much to her joy, her pleas are answered and they arrive in time to aid the village. Rinne orders her to be on stand by for her mission since she is too conspicuous. Reki takes the chance to warmly support Utakata.

When her soul is being consumed by Izuchikanata, she is deluded into thinking that she is attending school at her old home. She recovers and can be brought to defeat the giant demon. Upon her return, she finally thanks Kyokai for creating the medicine which saved her life. Reki later pouts when her confectioneries are eaten and swears to punish the culprit.

She is a serious warrior who focuses on her duty. Her decorum is built on the rigid discipline of her chief, allowing for no vulgarity or informalities, but her earnestness causes her inexperience to shine. Reki wishes to be like her chief yet she is oblivious to her heart being too compassionate and trusting to live up to the image. Humbled by kindness, Reki cries easily and enjoys playing with the children in the village. She also puffs her cheeks if her maturity is ever questioned.

When Reki feigns her idolization for the protagonist, she dons him/her as her respected senior (先輩, senpai) and adopts the typical mentor and disciple social system with them. Her doubts over her paradoxical acceptance of a warrior's life were diminished by the protagonist and Slayers at Utakata village. Their actions convinced her that they do have a purpose and can protect life. Once her cover is blown, she continues to address him/her with honest respect. 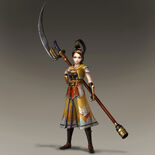 CG render
Add a photo to this gallery

Retrieved from "https://koei.fandom.com/wiki/Reki?oldid=433301"
Community content is available under CC-BY-SA unless otherwise noted.