Rob Lucci (ロブ・ルッチ) is a member of CP9, a secret organization created by the World Government that deals in intelligence, assassinations, and espionage. They are given full authority to kill any who oppose the law. Lucci is the strongest member and figurative leader of the group. Like Kaku, he worked undercover in the company of reputed shipwrights, Galley-La Company. He apprehends Franky to obtain the blueprints for a legendary weapon of mass destruction named Pluton. When the Straw Hats first attempt to save their captured comrades, Lucci is the one who effortlessly beats them back.

He soon transfers himself to Enies Lobby and is eventually confronted by Luffy. Both fighters exhaust themselves in a long and testing fight. After each fighter displays their ultimate techniques, Luffy emerges the victor from their final conflict. Lucci requires months of hospitalization to recover from their bout.

Before his playable appearance, he had been a non-playable character since the first game.

In the second game, Lucci and the rest of CP9 protect the breached Punk Hazard lab that is being searched by the Straw Hat-Whitebeard Coalition. Later, CP9 is brainwashed by the Blackbeard Alliance and fights the Coalition at Rainbase. Although freed from the mind control, Lucci does not help the Coalition directly, but monitors Blackbeard's activities.

However, the first and third game follow his canon appearance in One Piece's storyline more closely. Lucci is at first, a distant-yet-mute wood worker at Water 7's Galley-La Company's Dock One, normally having his pigeon Hattori do the talking for him through ventriloquism. This farce is eventually dropped in that Lucci himself can speak, all while revealing him and some of his other co-workers to be part of CP9 as part of an undercover mission to retrieve the blueprints to Pluton from Iceburg. However, due to the complications of Nico Robin's past involving the Straw Hat Pirates to come and try to rescue her, the Straw Hats and CP9 engage in fierce battles against each other at Enies Lobby under the orders of Spandam. Lucci in particular is locked in a fierce battle with Luffy, to the point where both are pushed to their very limits with Luffy being the victor and Spandam ordering a Buster Call on Enies Lobby (leading it to its destruction while the Straw Hat Pirates escape).

In later portions of the time-skip not mentioned in the Warriors games, despite Lucci and his group being decommissioned from CP9, later parts of the story reveal him to have recovered and promoted to CP0.

In one of the DLC stages of the third game, Lucci and Magellan work to round riotting convicts being led by Crocodile.

Lucci believes killing is always justified in his profession. He will dispatch any who disobey the law or any who no longer prove useful for upholding it, often stating it to be "in the name of dark justice".

A steadfast believer in power, he reviles any mention of weakness. Acting ruthless and heartless, he is viewed as the darkest and most intimidating member of the group. He has a morbid fascination with blood and his code of justice, as well as enjoying a good fight and admiring Luffy's capabilities as a captain.

Due to his upbringing, he is obedient to his superiors, even if he scowls at what he perceives as pettiness and stupidity (especially towards Spandam, which is ironic considering their positions where flipped around when Lucci joined CP0). Lucci at times can also be quite collected regarding specific decisions at hand.

: Tempest Kick: AKA Rankyaku (嵐脚)'.' Holds onto his hat while performing a backflip kick, then dashes zig-zag into the air via the usage of Shave (Soru) and Moonwalk (Geppō), dragging enemies with him. He then on the final input kicks out a slashing air wave to the ground through the air (Tempest Kick in its base form) as the finisher.

: Finger Pistol: Spots: AKA Shigan: Madara 指銃「斑」: A variation of Finger Pistol: Yellow Lotus. Transforms into human form, and then unleashes a flurry of forward Finger Pistol jabs from both hands while running forward. Can tap

for more hits, whereas leaving it alone has Lucci jab forward into a braking Finger Pistol attack. Turns him into human form if already in leopard form.

is pressed enough times, where Lucci leaps back to send forward a horizontal bird-shaped Tempest Kick to the ground.

: Razor. AKA Kamisori 剃刀: After reaching the peak of his

combo, Lucci then utilizes a combination of Shave and Moonwalk to blitz around the air vicinity rapidly, damaging airborne enemies. He ends it with a smashing hand-standing dive to the ground. Can tap

for more hits, and using it close to walls will scoot Lucci away from them. Turns him into human form if already in leopard form.

: Tempest Kick: AKA Rankyaku (嵐脚)'.' Same as before, only Lucci claws upward with his left hand, performs an outward spin kick with his right leg, then slashes forward with his right claw. He performs the same Finger Pistol: Yellow Lotus attack for the fourth input (albeit unnamed), but instead ends it with a forward hopping Tempest Kick with short range on the air wave.

: Fire Sting: AKA Hibachi 火撥: A variation of the Flying Finger Pistol. The finisher to his prior chain, only he fires a large flaming bullet from the friction of his flick. Counts as a fire-based move, and can hit targets nearby via a close-range hitbox despite the move being angled upward.

: Iron Body: AKA Tekkai 鉄塊: Sweeps through the area in front of him in a zig-zag motion with great speed, and finishes by performing a forward Finger Pistol, then releases a circular shockwave from the hardening of his muscles (the actual Iron Body move). Transforms him into leopard form if already in human form.

: Iron Body: Empty Tree: AKA Tekkai: Utsugi 鉄塊「空木」: The finisher to his Iron Body. An Iron Body variation where he unleashes a larger and denser shockwave.

: Tempest Kick: Leopard Tail:' AKA Rankyaku: Hyōbi ( 嵐脚「豹尾」': Variation of Tempest Kick. Lucci teeters into position, then kicks with his right leg, generating a miniature cyclone which lasts for several seconds and sucks enemies in while dealing small damage. Transforms him into leopard form if already in human form.

: Grabs a single enemy in a turning right-handed swipe. If it connects, he then proceeds to slam them into the ground, which unleashes small launching shockwaves, then finishes by throwing them. Can continue tapping

for a total of 3 slams into the ground. This move does not count as a "true-unblockable throw" (meaning Lucci's grab cannot bypass invulnerable states). Transforms him into leopard form if already in human form.

: Rushes forward in a pounce, then spiral-dives through into the air diagonally before landing with a twin-claw slam.

Level 1 Musou: Six King Pistol: AKA Rokuōgan 六王銃: The ultimate technique of the Six Powers, and Lucci's signature move. Places both fists in front of him before releasing a small short-ranged shockwave of explosive force in front of him. Always done in human form.

Level 2 Musou: Ultimate Radius: Six King Pistol: AKA Sai Dai Rin: Rokuōgan 最大輪 「六王銃」: Transforms into his leopard form, then vacuums enemies to his front with a tail-spin. He then unleashes a stronger shockwave with his Leopard-body-enhanced Six King Pistol with a slightly bigger and more visible radius.

Lucci possesses superhuman strength and endurance; he is noted to be vastly superior to the other CP9 members. Lucci is a master of the Six Powers (Rokushiki 六式, lit. Six Styles) taught to all other CP9 members to the point where he is capable of performing its ultimate techniques. The six different abilities granted to him by the Six Powers are:

Moonwalk (lit. Moon Step): Allows the user to utilize their enormous leg strength to kick off of the very air itself, allowing one to jump off of the air and achieve effective flight.

Iron Body (lit. Iron Mass): Allows the user to harden their body and muscles to make it as tough as steel, bolstering defenses. Can be used offensively as well. In-game, it also releases shockwaves if powerful enough.

Finger Pistol (lit. Finger Gun): Allows the user to perform finger jabs so powerful that it feels like a bullet.

Shave: Allows the user to move at high speeds and makes them invisible to the untrained eye.

Paper Art (lit. Paper Drawing): Allows the user to dodge attacks by going limp, floating around attacks like a piece of paper.

Six King Pistol (lit. Six King Gun): This is the ultimate seventh, hidden technique of the Six Powers that can only be achieved after obtaining complete mastery of all the other six, which Lucci has achieved. Lucci places both fists in front of him, positioned right in front of his target. He then releases a large explosive shockwave.

On top of being a martial arts master, Lucci also ate a Zoan-class Devil Fruit, the Cat-Cat Fruit: Leopard Model. This fruit allows Lucci to transform fully or partially into a leopard. His leopard form will enhance his physical traits, further strengthening his already-deadly techniques.

Gameplay-wise, depending on the form he chooses, he will either focus heavily on speed (in human form) or gain a dramatic boost in power (leopard form). He is able to switch between the two forms freely, and it is up to players to utilize his 2 forms effectively in between his attack strings and combos. 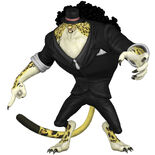