Roronoa Zoro (ロロノア・ゾロ) is a former bounty hunter and the first member of Luffy's crew. They first meet when Zoro is being held prisoner by a corrupt and draconian marine captain, Morgan, and is awaiting his execution date. He was charged for protecting a civilian girl from the marine captain's son's rabid pet wolf. Luffy respects him and offers Zoro a spot on his crew. Despite his initial refusal, Zoro agrees when Luffy keeps his word to retrieve his swords and free him from the firing squad.

Since his youth, Zoro has trained to become a swordsman and was already strong enough to defeat opponents twice his size. The only opponent he couldn't defeat was his dojo master's daughter, Kuina, who he furiously challenged time and time again. During their final duel together, they confide in each other their respective dreams to become the best swordmasters in the world, a goal which they both promise to fulfill.

When Kuina unexpectedly dies, he is given Kuina's sword, Wadō Ichimonji, as a keepsake. In her honor, he develops his trademark three-sword style and promises to someday fulfill his part of their childhood promise.

In One Piece: Pirate Warriors 2, he fights early on for Luffy before falling prey to the Frenzy Dials. In Chapter 3, he fights against his own crew at Baratie under Marshall D. Teach's mind control and though the Straw Hats are able to beat him, they are unable to free him. At Enies Lobby, the Whitebeard-Straw Hat Coalition is ambushed but soon become desperate to return Zoro to normal. Not wanting to lose Zoro to Teach forever, Dracule Mihawk stalls him until his crew frees him.

In the third game's Dream Log mode, he sometimes struggles in a training session against Mihawk and must be assisted. Some missions, he will search for worthy opponents before facing off against the player. In some missions, Perona will search for him as Marines are hunting him down. He may sometimes go into a three-way battle between him, the player and Sanji.

Most people's first impressions of Zoro is close to those of a malicious killer. People often mistake him for the captain of the crew instead of Luffy, due to his intimidating presence. In reality, he is a stout believer of honor and might, seeking only to fight if both parties are willing. A proud man of his word, he refuses to resort to trickery in his duels and may even admit his admiration for his opponent's abilities. Zoro hates to lose and can be a reckless daredevil to triumph as the fair victor. Should he see someone in danger, however, Zoro is not above practicing humility to save them.

Outside of fighting and training, he acts as a sound voice of reason for the crew who usually supports Luffy unquestionably. He is always on edge when meeting new people and remains cautious to those he can't trust. However, Zoro can also be notoriously lazy and borderline narcoleptic. His sense of direction is staggeringly terrible, as he can become completely lost with the simplest of maps or instructions.

: "Oni Giri": Zoro does an overhead cross-slash with both swords. He then does a slash to the right with his left sword, then to the left with his right sword. He then sends out 4 short-distance diagonal sword beams by swinging his left and right swords in alternating fashion. He then winds both swords back in iaijutsu fashion, and steps forward with a large cross slash.

: "Tower Climb~Raven Hunt~Flying Dragon Blaze": Zoro does a vertical rising slash that brings enemies up into the air with him. He then performs a quick flurry of slashes on the airborne enemies, then dives to the ground at an angle, causing a fiery explosion upon landing which knocks enemies back.

: "Tiger Hunt~Oni Giri~108 Pound Phoenix": Zoro winds both swords above his head and does a downward chopping slash with both swords. He then winds back and does another quick-draw cross slash. He then does a short hop into the air and slashes, unleashing a forward traveling air blast that resembles a small cyclone.

: "Oni Giri~Dragon Twister~36 Pound Phoenix": Zoro does a cross-slash with both swords, spins in place creating a small tornado around himself, then winds up his arm and sends forward an air blast with a sword slash. Players can hold the

: "Leopard Spinning Shot~108 Pound Phoenix": Zoro flies forward in a corkscrew drilling motion while slashing all around him, resembling a forward-traveling cyclone. This portion lasts for several seconds, and his direction can be directed by the control stick. He then finishes by sending forth a large air blast, also resembling a cyclone.

: Level 1 Musou: "Three Thousand Worlds": With one sword in his mouth, Zoro twirls his other two swords in front of him, causing a mini-cyclone that vacuums enemies to his front. He then dashes through them with a single powerful strike.

: Level 2 Musou: "Asura Silver Mist": Zoro assumes his Asura form, growing an extra 2 heads, as well as 2 extra pairs of limbs and swords, giving him the appearance of wielding 9 blades. He then winds up for a strike and dashes quickly through enemies in front of him, which damages enemies. After stopping, a large flurry of phantom slashes appear behind him and damage enemies.

R1 (Special Skill): "Lion Song": Zoro holds his sheathed katana in front of him, and then dashes forward at lightning speed leaving behind an afterimage, slashing enemies with a single powerful strike. This move can be charged by holding down R1, resulting in a much stronger version of the same move. The fully charged version takes approximately 20 seconds to charge, and Zoro can move and fight normally while charging it, so long as the player keeps the R1 button held down during this time. Being knocked off balance will cause Zoro to lose the charge and have to restart it. Players will know the move is fully charged when Zoro's single sheathed sword is glowing brightly.

Taunt: Zoro puts his black bandana on, or takes it off and ties it around his arm.

: "Asura: 9 Lightning Slashes": Same as Pre-timeskip Zoro, except the last hit. He insteads assumes his Asura form and spins, creating a mini-cyclone around him that damages enemies.

: "Bird Dance~Raven Hunt~Flying Dragon Blaze": Zoro slashs with one sword, sending a forward-traveling vertical sword beam along the ground, which launches enemies up. He then leaps up to the enemies, does a quick flurry of slashes on them, then dives to the ground with a fiery explosion upon landing.

: "Ultra Tiger Hunt~Oni Giri~360 Pound Phoenix": Zoro winds both swords above his head and does a downward chopping slash with both swords. He then winds back and does another quick-draw cross slash. He then slashes, unleashing a forward traveling air blast that resembles a small cyclone.

: "Mark of the Blue Dragon Running Water": Zoro glides forward across the ground with a blue fiery dragon aura surrounding him. Any enemies he passes through take damage and become dizzied and fall over.

: "Black Rope Dragon Twister": Zoro does a wide slash, which generates a large tornado that sucks enemies in and traps them inside as they fly around. It lasts for around 3 seconds before disappearing, allowing for some follow-ups.

: "Oni Giri~Dragon Twister~ 360 Pound Phoenix": Zoro does a cross-slash with both swords, spins in place creating a small tornado around himself, then winds up his arm and sends forward an air blast with a sword slash. The first input can be charged by holding down the

: "Leopard Spinning Shot~Asura Piercing Drill": Zoro flies forward in a corkscrew drilling motion while slashing all around him, resembling a forward-traveling cyclone. This portion lasts for several seconds, and his direction can be directed by the control stick. He then finishes by turning into his Asura form and performing a final slash on the enemies.

: "Castle Gate~1080 Pound Phoenix": With both swords sheathed, Zoro does an iaijutsu dash forwards, which pops enemies up into the air. He then charges forward while slashing, bulldozing enemies. He then leaps and slashes, sending a large vertical sword beam forwards.

: Level 1 Musou: "Crossing the Six Paths": Starting with both swords sheathed and one in his mouth, Zoro lunges forward through enemies while drawing both swords and positioning them in a cross shape. It leaves behind a cross-shaped slash effect.

: Level 2 Musou: "Purgatory Oni Giri": Zoro winds both swords behind him while crossing his arms. He then lunges forward through enemies, performing a powerful slash. The area behind him erupts in a slash explosion.

R1 (Special Skill): "Death Lion Song": Functions similarly to his Pre-Timeskip R1, with some differences. He first generates a small cyclone in front of him that knocks enemies upwards. He then leaps up, and dashes through the enemies with a quick iai slash. The charged version allows for a stronger slash.

Taunt: Zoro puts his black bandana on, or takes it off and ties it around his arm.

Zoro uses his own three-sword fighting style. He is plenty proficient with just one or two swords if the situation calls for it, and even has specialized techniques using only 1 or 2 blades. However, he is at his strongest when wielding all three blades. When he uses all three swords at once, he places Kuina's sword between his teeth and arms both hands with a respective blade. While in this position, he can twist and curve his upper torso to perform a variety of slashes. Although being a swordsmen means that he's focused in melee combat and close-ranged battles, Zoro has adapted to long-ranged battles by being able to create razor winds with his techniques, which can send forth long-traveling slashes. His mighty physical strength and stamina highly contributes to his survival in battle. 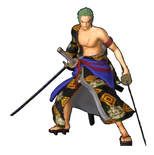 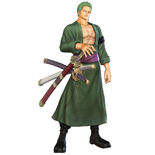 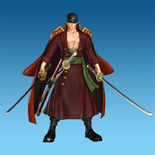 Zorojuro costume
Add a photo to this gallery

Retrieved from "https://koei.fandom.com/wiki/Roronoa_Zoro?oldid=438622"
Community content is available under CC-BY-SA unless otherwise noted.