Ryu Hayabusa (リュウ・ハヤブサ, Ryū Hayabusa) is an original character created by Team NINJA for the Ninja Gaiden series and is the leader of the Hayabusa clan.

He made his first appearance in Koei games as a guest NPC in the PlayStation 3 port of Dynasty Warriors: Strikeforce. He is one of the collaboration characters included in the Warriors Orochi series, Shin Sangoku Musou VS, and Warriors All-Stars. For the Warriors All-Stars collaboration with the baseball team Yokohama DeNA BayStars, Ryu is paired with Takayuki Kajitani in merchandise.

In Dynasty Warriors: Strikeforce, he would give players a quest to find his sword; completing this quest allowed players to make use of it in the game. The fourth anniversary PlayStation 3 version of Dynasty Warriors: Online enables players to download parts of his costume for their male avatars. They may do so by registering various serial codes.

While pursuing an evil entity in his world, Ryu suddenly found himself transported through Orochi's twisted world by an unknown force. According to comments from Team Ninja developers, he arrives in the dimensional realm before the third Ninja Gaiden installment, as well as after the fourth Dead or Alive installment.

While Kiyomori recites a magical incantation to recover from his previous losses against Ma Chao's forces, Ryu intercepts his spell at Anegawa. His interruption releases Kiyomori's hold over his army and causes his withdraw. Intent on hunting and dispatching Kiyomori, Ryu willingly offers his support in the Coalition's forces after the battle. He later aids in the fight against the Takeda and Uesugi forces at Shizugatake and helps Deng Ai in defeating Zhong Hui at Luoyang.

In Hyper, he joins Jia Xu in investigating a new disturbance at Wan Castle. Although they are surprised to find that their allies were now possessed by sorcery, Momiji arrives to dispel they hypnosis. The trio later work together to defeat the demons responsible for this trickery.

In Ultimate, Ryu rejoins Rachel and Ayane to travel independently. They are later tricked by a fake Zhang Jiao into attacking the Wei forces at Yan Province. In spite of Kasumi's assertions of innocence, Ryu refuses to listen and is later defeated. When the chaos is finally cleared, Ryu apologizes for his misstep and promises to aid the others in finding the source of the mess.

During Warriors Orochi 4 Ultimate, Ryu was lost in the world before being picked up by Da Ji's forces. Unable to find other humans, Ryu agrees to serve her, but secretly plans to desert her once he is able to find those clashing against her.

His opportunity comes at Honnōji, where she orders him to face the Coalition. After testing them and being bested, he joins the humans and undos Da Ji's sorcery to allow the Coalition to defeat her. He then joins the Coalition in the hopes of stopping the plans of the demons.

He and Joan of Arc are later called by Zeus to join Achilles's mock battle against the Gods at Guangling. When Achilles attempts to start another fight even after the battle, Ryu asks Zeus to send the warrior to an actual battle before he causes more trouble.

Hideyuki remarked that voice actors record their lines without any visual aids for video games, so he did his best to make his character seem like the best partner possible. He took care to always be in top physical form for his recording sessions, which proved difficult due to quantity of character exchanges in this title.

Ryu is a taciturn and proficient ninja who has hardened his emotions and disciplined his skills to perfection. Having endured rigorous training and the hardship of losing several members of his clan to various tragedies, he ruthlessly shows no mercy to his adversaries or to any who dare to harm his ninja home. He charges into the fray with undaunted confidence and professional integrity. In spite of the morbid nature of his profession, he is often swayed to strike foes for the sake of righteousness as he fights to protect the prosperity of the land against malevolent supernatural entities. His family legacy and the Dragon Sword are often the reasons why he is called into action.

When he is not on a mission, Ryu is a popular leader with local residents in his village. Not only is he a strong role model for ninja in training, but he is heralded for being kind and gentle. As he cares for the safety of every resident in his home, his heroics earns him his share of smitten admirers.

For his Warriors Orochi appearance, he shares an affinity with Ayane, Zuo Ci, Hanzō, Rachel, Momiji and Benkei in the third installment. During the fourth installment, he enlightens Yang Jian of the worth of humans and their ability to adapt to their weaknesses. Yoshitsune admires Ryu's calmer demeanor and both mutually respect the rigorous training of the other.

"Hah. You make a sound by clapping my one hand with yours. The lesson, then, is not to be too constrained by definitions."

): Does two quick circular slashes, and flips forward to perform another one.

): Does a rising upper strike to launch enemies into the air, a quick aerial slash, and another launching swing.

): Produces a tremor by slamming the ground, following it up with a wide half-circular slash, and a leaping vertical slice leading to a horizontal swipe while in the air.

): Does a low overhead slash, a wide horizontal swipe, and multiple swings leading to a higher overhead strike.

: Spins around once before doing an uppercut slash, sending nearby foes airborne.

: Ryu performs a series of quick slashes, ending the attack string with an overhead chop.

: Does a small horizontal slash.

: Does a broad swing while in mid-air.

: Drops unto the ground and stabs nearest foe upon landing.

R1: Summons multiple fireballs around user which spring in a high arch towards groups of enemies. The number of targets within range increases the amount of fireballs conjured.

, R1 (Warriors Orochi 3 Ultimate only): Glides in mid-air. If the move connects, Ryu will latch unto the target from behind and inflict a powerful circular slash.

: Performs a series of slashes. Should it connect against an opponent, the target will be immobilized in time allowing for extra hits. The attack ends with a small burst of energy.

(True): Finishes Musou sequence with blades of air surrounding the user, immediately shooting off in all directions.

: Swings sword from right to left.

: Slashes several times on the right.

Some of Ryu's abilities and skills are references to the ones he has in the Ninja Gaiden series.

: Ryu does a flip and does an overhead slash to the ground.

: Ryu charges forward and does a quick slash upward.

: Ryu leaps up and slashes down.

: Ryu twirls and slashes to the right.

: Ryu flies forward while slashing, finishing with a wide slash to the right.

: Ryu grabs an enemy in the air to slam them in the ground. If you charge this attack, Ryu will dive to the ground and slash twice rapidly.
Jump +

: Ryu dives to the ground and slashes to the left down once.

: "Art of the Inferno": Ryu forms a hand seal with his right hand, making a large fireball appear above his head. With a wave of his hand, the fireball flies down to the ground, detonating a large explosion and blasting enemies away.

Ryu uses the following big star weapons in the game. 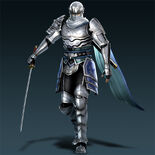 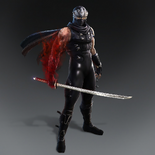 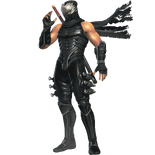 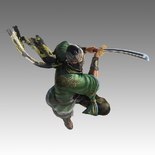