Sōma is an old friend of Yamato and Yū. He is the leader of the third squadron of the Hundred Demon Corps who fought in the "Awakening" eight years prior to the main narrative. During that time he and his unit stayed at Utakata Village. His seventeen man squadron was a band of misfits, but they were encouraged by Yuu's smile to keep fighting.

Before the last day of the "Awakening", when the situation was at its bleakest, Sōma and his team swore their last wills to one another. Whoever survived would be entrusted with fulfilling the wishes of those who died. Although it was meant to be a hopeful pact for the future, Sōma became the lone survivor. He fought relentlessly until his body tired and was brought to Utakata. On the brink of death, he dreamed of his comrades joining the afterlife. Sōma claims he was anchored to life by Yuu; she patched his wounds and held his hand while he was unconscious. The girl's hand stopped him from walking with his friends in his dream.

Sōma learned of his squad's annihilation as he was recovering, bitterly accepting the label of hero in their wake. Compelled by their memories to keep living, Sōma swore to fulfill his departed comrades wishes by himself. By doing so, he can feel like a true hero worthy of their respect. He is reinstated to his post after his recovery. While duty calls him to different segments of the land, Sōma always sets time aside to ensure that the sixteen wishes are granted.

During the Kiwami collaboration event in Quiz Battle Toukiden, he meets the protagonist while pursuing a Kazenui. Sōma agrees to let him/her help him hunt for the beast to retrieve a memento it stole from him: a hairpin from one of his departed friends, Genkaku. Genkaku had wanted to give the hairpin to the women he loved. Sōma was on his way to delivering it and Genkaku's wishes for her to find another love in life. While they are together, he treats his new comrade as an honorary member of the Hundred Demon Corps. Sōma feels they have promise to someday become a member, wishing them well when the beast is defeated.

Sōma tried to track the protagonist soon afterwards, but the protagonist's whereabouts were difficult to track. He eventually learns from Yamato that they are at Utakata Village and visits them in between his missions. Once he sees their advanced hunting prowess, Sōma makes good on his earlier promise and gets them enlisted into the Hundred Demon Corps.

The protagonist of the first installment first meets Sōma when his unit is assigned to Utakata Village in the fight against the northern "Eclipse Demon". At Reki's behest, he/she feigns interest in Hundred Demon Corps membership to investigate Sōma's unexplained absences from the village grounds. Sōma doesn't have the authority to grant it yet allows him/her to be beside him for routine patrols of his unit. He opens up about his past to him/her during an evening chat with wine.

When Reki confronts him, Sōma bluntly elaborates that he seeks to fulfill the wishes of his dead companions. He is finally on the last person: Sakon. Sakon's wish was to have his body returned to his family. It took years for him and his current squad to locate due to the demonic distortions and fluctuations of their dimensional portals. His vice captain confirmed Sakon's remains yet an Onogoro is blocking the way. His pure integrity clears him of suspicions and gains Utakata's full support. Reki is apologetic to him, but he doesn't understand her perspective on the matter.

The "Eclipse Demon"'s portal unleashes a demon swarm inside Utakata Village's barrier soon after. Sōma is duty bound to obey Kuyou's command to forsake the village, although he hesitates to comply. Once he sees a crestfallen Yuu and is consoled by the protagonist, Sōma wills himself to live up to his reputation as a hero; he would rather die fighting than abandon Utakata. The results of their die-hard defense are satisfactory enough for Kuyou to let him slide past with a light reprimand. Sōma privately thanks the protagonist for reminding him of his values. He confesses his wish is to someday return Yuu's smile with one of his own, thanking him/her for giving him the chance.

When his soul is being consumed by Izuchikanata, he hallucinates reuniting with his dead comrades. His soul recovers and he may fight in the final battle. Kuyou wishes to enjoy Utakata's serenity, meaning Sōma is under orders to stay. He and Ibuki spend their days chatting about their womanizing techniques.

Sōma and his men find themselves in the Three Kingdoms era during a collaboration event in Shin Sangoku Musou Blast. After challenging the player several times in a row, he acknowledges the heroes of this period and returns to Utakata Village with Horō in tow.

Strong and reliable Sōma earns the trust of his men with his projected charisma and bravery. He keeps spirits high even during the roughest of times. Moving at his own pace, he prefers direct confrontations and orderly conduct only when it is necessary. While he is easy-going off duty, Sōma can be ruthless while conducting orders. He has an infamous blood-thirsty streak during battle and enjoys taunting demons. He is proud of his claw circlet since it's a sign of his leadership in the Hundred Demon Corps. He doesn't appreciate Horou and Hatsuho mislabeling it as a horn.

During his stay at Utakata Village, he shares an odd bond with Ibuki. They share a common appreciation for lost comrades and life yet bicker over their position as the ladies' man of the village. He occasionally enjoys reminiscing his past with Yamato and Yuu. He feels deeply indebted to the young woman for saving him and is highly protective of her. Sōma is also a cat lover and sometimes worries for his deceased comrade's cat, Tamakichi.

Normal Attack: Hits the opponent with fierce swings.
Charge Attack 1: Swipes enemies to the left before striking the ground to produce a shockwave. The Blast version strengthens the impact of the attack.
Charge Attack 2: Swings club counter-clockwise. The Blast version extends this attack by including a shockwave-inducing slam, another powerful swing, and a leaping strike that causes fissures to erupt from the ground.
Musou - Destroyer: Plunder (鬼千切・壊): Unleashes a wide and powerful swing done clockwise. 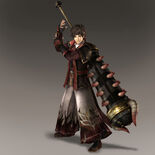 Toukiden 2 render
Add a photo to this gallery

Retrieved from "https://koei.fandom.com/wiki/S%C5%8Dma?oldid=405071"
Community content is available under CC-BY-SA unless otherwise noted.