Previously earned saved game data can be used in select Koei titles for extra bonuses. These bonuses are optional to enjoy yet are sometimes exclusive depending on the title. Both sets of saved game data often have to occupy the same memory card in order to take effect. Access to these extras is mainly limited to the home console versions games (mainly PlayStation 2 or PSP).

List of games and benefits gained from saved game data. Unlike the Import option, players may need to access the save file benefits through a different menu screen while playing their game normally. Some titles will automatically locate the needed saved game data and will request permission to allow the bonuses to be included.

Allows players to play the expansion with the player's powered up characters from the original game in Musou Mode.

Lets players keep their Dynasty Warriors: Strikeforce characters if a save file is present and rewards players with four bonus masks to customize their characters' appearance.

Players can import their PS3 data from Dynasty Warriors 7 and continue playing with it in the PSP port. Automatically unlocks the entire playable cast.

Original data from Dynasty Warriors 7 can be used in this expansion to play whoever the player wants in Story Mode or Conquest Mode. Players also need the data to activate a two player Story Mode. Unlocks characters depending on progress, and all said characters will have their stats from the original game. If a character has learned all skills, they will need to be relearned, but the characters will be given enough skill points to learn most, if not all of them. All gallery items are also transported. Any DLC content from the original game can be used in Xtreme Legends.

Allows players to load and continue data from any PlayStation port of the game.

Players who downloaded and used the Edit Mode trial can reuse their data in the final product.

Japanese Nintendo Switch ports only. Have save data from Samurai Warriors: Spirit of Sanada, Warriors Orochi 3 Ultimate, and/or Fire Emblem Warriors to receive the following bonuses:

Players may continue from their Samurai Warriors data if it is present on their memory card at the initial loading screen.

If the player starts the game with a Samurai Warriors save, Hanzō Hattori and Kenshin Uesugi can be played from the start. Having a Samurai Warriors: Xtreme Legends save also allows Tadakatsu Honda to be initially playable.

Players may continue from their Samurai Warriors 2 data if it is present on their memory card at the initial loading screen.

Sengoku Musou 3 Z can be used in this title to unlock koku at the start of the game. Movies and conversation quotes that were earned in the former title can be transfered to this title's gallery. New weapons for Nobunaga Oda, Okuni, Masamune Date, and Hideyoshi Toyotomi will also be unlocked.

Players can use their Sengoku Musou 3 Z or Samurai Warriors 3: Empires data at the initial loading screen to automatically unlock every playable character.

Players may continue from their Samurai Warriors Chronicles data if it is present. Weapons, movies, conversations and DLC can be transferred and stored in the revamp.

Players can unlock 10,000 gold if save data for Sengoku Musou 2 HD Collection is present. PS3 save data and DLC is compatible with the PS4 port.

Lets players immediately learn the first ability from every character at the start of the game if Warriors Orochi save data is present. The Japanese PSP port also allows players to unlock and play the awakened versions for Zhao Yun, Sun Shang Xiang, and Xiahou Dun if there is Dynasty Warriors: Strikeforce data present.

Unlocks every character at the start of the game if Warriors Orochi 3 PS3 save data is present.

Japanese Nintendo Switch ports only. Have save data from Dynasty Warriors 8: Empires, Samurai Warriors: Spirit of Sanada, and/or Fire Emblem Warriors to receive the following bonuses:

Data the player has of the original release can be used within the upgraded version.

Players who have played the action trial version for either console can transfer their data into the final game with a pink Tenko mask. They can keep four souls earned from the trial.

Toukiden: The Age of Demons save data: Automatically unlocks the Yamato and Horō armor sets. Clearing the main story grants a new Tenko skin. Finishing every mission in chapter 7 during single player mode grants a special item, while finishing every multiplayer quest unlocks another character armor set. Earn at least five trophies/accomplishments for ten expendable items. Another special item is given for obtaining every trophy/accomplishment.

Toukiden Kiwami experience trial save data: Complete the three special missions at least once to unlock Chapter 8 (first chapter of Kiwami) and Shuusui's hat and Yuu's hairpin for their avatars. Clear the requests to receive Demon Steel for strengthening equipment in the retail version. Players who play the sample story experiences of the first two chapters can reuse their data in the retail version. 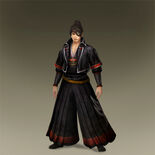 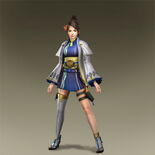 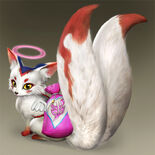 Toukiden Kiwami save data for the PlayStation Vita automatically unlocks the Sōma and Hatsuho armor sets.

Save game data from Dynasty Warriors 4 and its Xtreme Legends expansion automatically unlocks Da Qiao and Xiao Qiao in the game. Dynasty Tactics 2 save data unlocks Lu Lingqi as an accessible character.

One more bonus scenario with Dynasty Warriors 5 or Romance of the Three Kingdoms IX data.

Save data from Samurai Warriors and Samurai Warriors: Xtreme Legends allows players to use Keiji Maeda and Ina in Nobunaga's army. They will start with unique equipment based on their Warriors counterparts, but their voices will be the generic voices in Kessen III.

Players can continue from their data from Bladestorm if they own the PS3 port of both games.

Players can use their original data from the first iteration of Angelique trois and continue playing with it in Aizouban.

Images and character affinity ratings earned in Prologue can be carried over into the PC version.

Lets players load up their original character data from Harukanaru Toki no Naka de 3. Player also gains access to the exclusive Hiraizumi route (after clearing the game once with any ending). Collects previously earned illustrations from original game and stores them within the Izayoiki gallery.

Unlocks special data reading option in the Extras section if Harukanaru Toki no Naka de 3 is present. Special options for the Christmas party can be made available if Izayoiki save game data is present. The Izayoiki bonuses need to have the endings with the Hiraizumi route, Shirogane, and/or Tomomori previously saved in order to appear in Unmei no Labyrinth.

Harukanaru Toki no Naka de 4 Aizouban save data grants 300 of each element at the start of the game. It's also possible to view the "The Lost Four Gods" event without needing to build bonds with the deities.

Allows players the chance to transfer their character levels and weapons from the original game to Kazahanaki. Only saves with every ending completed can be transferred; the save data's title must be the "After the Ending" screen.

PSP only. Allows players to view a new extra event in the AnotherSky series. Can also be downloaded for free.

Upon starting a new game, PSP save data from either Kiniro no Corda 3 or Kiniro no Corda 3 Full Voice Special grants the option start with three practice items and a small starting supply of ingredients for recipes. Have save data from all three AnotherSky titles to unlock the Hakodate Amane Gakuen students' romance routes in feat. Amane Gakuen. Full Voice Special save data unlocks Nia's possible route in the aforementioned game.

A Winning Post World 6 2006 save file can transfer its Story Mode information into World 6 2008.

If players have a Winning Post World save file, they can transfer their previously created characters and horses into their World 2010 game.

Allows various characters to appear within the game depending on the title. Any entry from the Winning Post series unlocks Keiko Ohara and Yuki Kakizaki. Save data from the Winning Post World titles adds Hiyori Tooyama and Tokichiro Shiba to the game. Champion Jockey lets Mansaku Seibu and Ippei Tobita appear.