Not to be confused with a Gundam protagonist.

Setsuna (刹那) is an original character in Warriors All-Stars.

Setsuna is Tamaki and Shiki's cousin who is the son of an earlier king. His father died when he was still young, so Setsuna lost the right to inherit the throne long before the current setting. With the world in its current crisis, he opposes Tamaki's right for inheritance.

He owns the Kusanagi Sword as proof of his royal lineage.

After the events of Warriors All-Stars, Setsuna and his relatives are devoured by a demon and warp to Nakatsu Kuni near Shinonome Village. Their royal treasures protect their souls from being devoured by the demons of Ōka's world. Surrounded by them, Setsuna does his best to defend himself until Tamaki guides the protagonist's party to his rescue.

Kikuchi took care to portray Setsuna as a "passionate boy". He struggled acting for his interactions with the female cast since his character's admiration for them took time for him to portray.

Setsuna is a hot-blooded and active youth. He doesn't like to stay in one place for too long.

Despite their actual family ties, he is close to Tamaki and Shiki and considers them to be his surrogate siblings.

The Kusanagi Sword is one of the Three Imperial Regalia of Japan.

: Setsuna slashes up left, then right, then thrusts forward. He then spins counterclockwise and slashes to the left, then up right, then does an overhead slash downwards.

: Setsuna drags his sword up from the ground and slashes upwards to release a stream of rock up into the air. The last hit also fires forward a vertical blue sword beam.

: Setsuna stabs the ground with his sword, releasing a giant shockwave.

: Setsuna swings his sword up right while generating wind.

: Setsuna slashes up right, then stabs at the enemy. The stab part unleashes a flurry of phantom stabs that accompany it.

: Setsuna's sword glows with blue energy and he does an overhead slash to smash it into the ground, which launches rock rubble into the air.

: Setsuna slashes to the right.
Dashing +

: Setsuna slashes to the right.
Jump +

: He swings his sword rapidly left and right in the air.
Jump +

: Setsuna dives to the ground and slashes down left.

: Gripping his sword with both hands, Setsuna points his blade skywards, charging it with blue magical energy. He then leaps up and proceeds to spin rapidly pointing his sword outwards, performing a wide-hitting spinning slash. He finishes by landing on the ground and doing a final wide slash to the left. Direct homage to Dynasty Warriors. 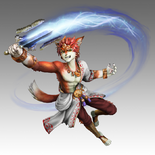 Retrieved from "https://koei.fandom.com/wiki/Setsuna?oldid=381051"
Community content is available under CC-BY-SA unless otherwise noted.