Shūsui (秋水, Shuusui) is a secondary character who resides in Utakata Village. The player can normally find him to the far right of the receptionist.

Shūsui works for the "Slayers" organization, the currently elected government created to protect whatever remains of humanity from demons, and is their private agent sent to oversee Utakata Village. He studies demons, and he uses his research to offer logical if controversial strategies to protect the village. To ensure that his plans proceed smoothly, Shūsui convenes with Yamato or Kikka in advance and reveals them only when he deems it fit. These plans include strengthening the priestess's barrier, locating the portal which could start another "Awakening", and discouraging rescue missions to focus on their defenses.

He was born in the lands north of Nakatsu Kuni (likely contemporary Hokkaido). Eight years before the main story, Shūsui saw service in the "Awakening" due to the dimensional portal opening in his homeland. The Slayers tried to defend it but were too overwhelmed. Kuyou, the leader of the expedition, chose to cut their loses and abandon the north, resulting in the annihilation of the northern villages were wiped from existence. Kiwami adds that Shūsui escaped by navigating the caverns found within gaps of the demonic realm. Shūsui rationalized that it was an inevitable sacrifice, yet he couldn't forget about his friends and loved ones who were killed by their decision. As one of the scant survivors, he privately researches for a method of saving those lost in the north.

The protagonist and his/her compassion for the other Slayers perks Shūsui's interest in him/her. After spending the majority of the main story hinting about his master plan to him/her, he finally feels confident sharing it with the Slayers right before they depart to close the second giant portal. The researcher postulates that they can use the demonic gateway to travel back in time to redo the past, reasoning that it is a possible reality due to the portal's massive manipulation of space-time. Although the prospect initially sounds promising, the Slayers decline since they treasure the present.

Having predicted their response, Shūsui acquiesces defeat. The researcher earnestly places his trust in them to save humanity from another "Awakening".

Kiwami has Shūsui's schemes be foiled by the Sacred Mountain's prominence in Utakata. He is later revealed to be a member of the Way of the Moon and Sun, a secret organization of taboo demon researchers who seek to discover their origins. He acts as their spy within Utakata Village but has put his mission on hiatus due to events from the first game. Instead he prioritizes his research to explore the potential of convenient space-time travel. He lets the other Slayers fight in his contained experimental arenas to gather and study dimensional demon fragments.

Shūsui deduces that Kuyou and Kyokai are in cahoots, warning each of them to stop their plans. When the protagonist and Reki are lost at Chaos, Shūsui uses his personal experience to create a map of the caverns. His map is used by the Slayers to rescue their stranded comrades. The researcher confronts Kuyou later and reveals his northern origins to the elder to criticize his strategies. He explains the Way of the Moon and Sun's motivations to the protagonist, assuring him/her that he is not their enemy.

Once he suspects that Kuyou is subservient to Kyokai Shūsui asks him to cease his plot to save the protagonist. He promises to save the hostage by appealing to Rinne. He stays true to his word even with Kuyou's refusal, wishing to prove the merits of honorable morales to the elder. While he is never told outright, his words have moved Kuyou to change.

When his soul is being consumed by Izuchikanata, he hallucinates the destruction of the north. The panic-stricken scholar tells the protagonist to flee at once. He recovers and resumes his research.

A realist to a fault, Shūsui is a professional who purposely ignores bonding with others. His sly remarks sound tact and playful, yet they often attack the fallacy of relying on emotional attachment. The Slayers begrudgingly accept his plans for the greater good and may deem him to be an inexorable schemer. Though he accepts the Slayers' shunning in stride, Shūsui is genuinely moved by their camaraderie for one another. He wonders if the north could've been saved if the protagonist was there, quietly regretting the events of the past but hopeful for the future.

Kiwami establishes him to be an old friend of Rinne. They share the same past and origins eight years ago. He repays her friendship by secretly giving Shiranui information. Kuyou is still his object of hatred. He cannot forgive the elder for his callous act in the past and his predictability in Utakata Village. Shūsui is civil before him only because of the hope the protagonist gives him.

Higher affinity additionally increases the chances of him appearing within the village's bathing area.

Shūsui provides the in-game encyclopedia. He updates entries based on the player's progress through the main story or their exploits in hunts. 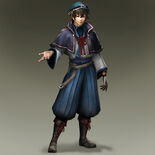 CG render
Add a photo to this gallery
Retrieved from "https://koei.fandom.com/wiki/Sh%C5%ABsui?oldid=216021"
Community content is available under CC-BY-SA unless otherwise noted.