Shadow Runner (絶影, Juéyǐng (Chinese), Zetsuei (onyomi), lit. Suppressing Shadow) is a horse from the Three Kingdoms period. It was said to have run so quick that it would cast no shadow during its sprint. In the Dynasty Warriors series, it is a black steed but there is no definite description regarding its color. It is named in the Record of the Three Kingdoms and Book of Wei but not in the Romance of the Three Kingdoms.

The horse is famous for carrying Cao Cao to safety during his flight from Wan Castle. Historical records state that it was wounded in the foot and its fate remains unknown. In the novel, it received three arrow wounds -one located in its eye- and perished after it saved its rider. Later Cao Cao would offer it tribute in memory along with Dian Wei.

Players riding this horse are more resilient against attacks, preventing them from ever getting knocked off at all. Though one would stay on the horse, players can still take damage from enemy attacks and even be KOed. This trait can carry over to other horses they choose to steal/borrow and ride, such as another copy of Red Hare or Hex Mark.

In earlier games of the series via Dynasty Warriors 4 and 5, combining the Shadow Runner with characters that only attack from one side while mounted, such as Zhou Tai and Ma Chao, proved so powerful that many fans considered it to be cheating, especially due to the latter's very powerful mounted charge attack in the aforementioned titles. Of course, in some scenarios and via player preferences, it is offset by the fact that the horse itself still travels at an average speed akin to a majority of the general-ranked horses in the series, unless the player manages to steal a faster horse.

However, in a two-player setting, any of the two players that isn't equipped with the Shadow Runner saddle while the other player is, cannot have the same resistance effect applied to them should they borrow the Shadow Runner for themselves; the effects only apply to any player that has equipped the saddle beforehand.

Also in Dynasty Warriors 4: Xtreme Legends, Gongsun Zan will at times ride this horse, both in Yuan Shao's Legend Mode stage and in some stages of Xtreme Mode whenever he is encountered as a Hyper Mode commander. Because of this, it can be hard to try and combat him on foot properly without a Shadow Runner of your own (as trying to fight him on a normal horse may eventually result in him knocking you off as he stays on). This can still work as a double-edged sword; since Gongsun Zan will not flinch when mounted on the Shadow Runner, he can suffer continuous non-airborne-penalty-damage from any source, allowing the player to rack up massive damage on him especially with most wide-hitbox-Musou Attacks.

Stage: Legend of Cao Cao
Defeat Huang Gai, Ling Tong, Lu Meng and Gan Ning in that order, though there may be a 5-minute time limit.

No definite way of getting this: the player must get lucky with the "Change Production" tactic. There are reports that having Lu Bu as grand general helps, however this is unconfirmed.

Stage: Battle of Liang Province (Allied Forces)
Defeat Zhang Ji and Hu Zhen in less than 45 seconds after their arrival.

Select easy mode and equip Red Hare. First destroy the south-western supply base and the two attack bases in the top-left and bottom-right corners. Then camp out in one corner. When Dong Zhuo arrives, he will say "Ha! Do you think I came without a plan!?" after about 1~2 mins. This is the point that the enemy reinforcements come. Quickly kill off the newly spawned reinforcement officer (ignore their troops), then quickly head to the other without stopping.

Produced in the northwest most land, Xi Liang. Develop it until you cannot do so any more. After you are done developing, go to "Assign" and do "Western Trade". Repeat this until you get the Shadow Harness.

Raise a black colored horse with "eyes that consider the world" and "possesses a heavenly physique" in its description. The player will need a character with Horsemanship to ensure they unlock the Shadow Runner.

In Campaign mode, capture "Luoyang" in "The Struggle for Power" under the Chaos difficulty. 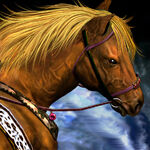 Romance of the Three Kingdoms XI portrait
Add a photo to this gallery
Retrieved from "https://koei.fandom.com/wiki/Shadow_Runner?oldid=422236"
Community content is available under CC-BY-SA unless otherwise noted.