Shennong (神農, onyomi: Shin'nō; lit. "Divine/God Farmer") is one of the Three Divine Sovereigns who is reputed to have ruled ancient China. Depending on the source, he ruled after Fuxi or Nuwa. He is renowned for cultivating various plants and is considered one of the cultural fathers of medicine. According to legend, his love for agriculture caused his downfall. He was said to have been poisoned by toxic plants he had gathered.

His Warriors Orochi counterpart is called the "Third Prince" by Fu Xi and Nuwa, meaning that he is the third sovereign in this continuity.

Shennong is a mystic who gathers and grows plants. His constant exposure to flora caused his body to be somewhat translucent. He was content to stay within the mystic realm until he notices humanity's struggle within the dimensional realm. Like the other mystics, he descends from his home to provide assistance. He first fights against the Resistance at Yangping Gate alongside Hidetada Tokugawa and Liu Xun. After hearing their explanation, Shennong immediately decides to join them in their quest.

Ultimate has him impede the villainous Tamamo and aid the heroes alongside Kaguya. He and Gan Ning arrive in Shizugatake to rescue those present from being defeated by a group of impostors. Upon cornering Tamamo, he and his fellow sovereigns combine their powers to seal her. Despite victory, he is aware that Tamamo may someday escape again. True to their fears, Tamamo escapes the Killing Stone once again and is untraceable. Rather than search for her once again, he and the other mystics agree to return to the past and seal Tamamo within the Divine Mirror instead.

After recovering the Divine Mirror, Shennong proceeds to help eliminate the remaining tails of Kyūbi, which are causing chaos within the ranks of the Coalition.

He is also given a hypothetical scenario, where he descends into the mortal realm to heal Susano'o's wounds from the Hydra and accompanies the chase for Da Ji at Sekigahara. Believing that the humans wouldn't mindlessly follow her without reason, Shennong later departs from the Mystic Army after Susano'o's insistence to demolish the mortal armies protecting Da Ji.

Shennong first appears in the new world alongside Taigong Wang during the three-way fight between the Coalition, Ares and Loki in Warriors Orochi 4. He later accompanies Nuwa and Sanzang back to the Mystic Realm to find Athena fighting against demons from Da Ji. Da Ji then reveals the newly-revived Orochi X, forcing all the mystics to flee from the realm.

Shennong is a rather calm and easy-going mystic, willing to see through and trust in the power of humans for himself. He is also openly friendly and a dependable person, as well as knowledgeable.

He shares an affinity with Fu Xi, Nuwa, Ieyasu, Lu Meng, and Motonari. In regards to the latter two, he bonds with them over intellectual pursuits and achievements. In the fourth installment, he offers to try and heal Guo Huai's sickness.

The item affiliated with Shennong, the mortar and pestle, is a tool often recognized since ancient times as a medicinal tool to grind herbs for mixing. In Chinese folklore, Shennong is accredited to being the inventor of these tools.

"I'd be shaking if I were putting poisonous herbs and who-knows-what in my mouth, like you do."
"But by doing that, I'm able to help people. There's nothing frightening about helping people."

: Freeze enemies in front of Shennong.

: Grows a small field to launch enemies in the air.

: Smashes the whip to the ground.

: Lifts enemies in the air whacking his whip three times and then swing right.

: Small fields grow in the left and right, and then Shennong grows a larger field in front.

: Thrusts his whip, then turns his whip into weeds and swings them up.

R1: Takes a meditative stance and gestures. Results in a spread of medicinal herbs around the himself to restore health and damages nearby enemies during execution.

(Cancel): Flies forward with a charge.

, R1 (Warriors Orochi 3 Ultimate only): Hovers in midair for a bit to gestures his whip at a downward angle, where he entangles enemies with vines before knocking them away.

: Sprouts two fields, then traps enemies in a tornado of leaves, then slams weeds down hard on the trapped enemies.

Shennong, whose name means "Divine/God Farmer", was a legendary figure of Chinese mythology. Being one of the three sovereign deities, he was said to have ruled over ancient China over five thousand years ago. He was the one who introduced farming, herbalism, and tea to the people, thus prolonging their lives in the process. Traditionally, he was also credited for the creation of various inventions (mostly for agricultural usage) and the refinement of Chinese medicine, like acupuncture and moxibustion. Few sources state that he also invented two of the most important musical instruments of ancient Chinese history to soothe the hearts and minds of the common folk.

In most tales regarding Shennong, he was notable for tasting all kinds of herbs to verify their properties for his research. He once identified a wide variety of poisonous plants more than seventy times a day through this method alone. This, however, was said to have been the cause of his death when his intestines ruptured after consuming the yellow flower of a weed. On the other hand, this is contradicted by one story where Shennong used a reddish brown whip to safely test the plants he had collected. Nonetheless, Shennong's sacrifice was so revered by the people that they worshiped him as the Medicine King in his honor. Many consider him the patron deity of farmers and pharmacists.

During the Warring States period of China, Shennong was sometimes confused for the Yan Emperor due to their contributions to agriculture especially the slash-and-burn technique used for fertilizing soil. In one instance, the two of them were merged into one god out of convenience, but this has done little for Shennong's reputation than it has for the Yan Emperor's. In 2004, an academic conference in China achieved general consensus by agreeing that the two legendary figures were one and the same. Most artworks often depict him holding a plant in his mouth while some portray him with leaves for clothes. Despite not being a historical figure, his existence alone in legends and folktales have made him a prominent hero in a more cultural context. 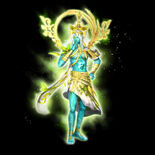