Shigehira Taira was a warlord of the Taira and helping Tomomori in the battle against Minamoto. Although Yoshitsune is his main enemy but the enemy is scarier than Yoshitsune is warrior monks from Tōdai-ji Temple.

He is a dignified young man but there is no memory left. He travel to Ōshū Province to served Fujiwara Yasuhira. Due to honesty, made Yasuhira happy and gave him the name Shirogane. Later, when the heroine and the group arrived in Ōshū, Shirogane was very welcoming to her group but then the heroine's group began to suspect Shirogane that maybe a member of Taira clan. Therefore, the heroine's group has surveyed various information until it can be concluded that Shirogane was actually a member of the Taira clan. He was the son of Kiyomori and the younger brother of Tomomori and Shirogane has a real name is Shigehira.

He is one of the commander of Taira army. In the game shows that he is brave enough.

He is a 7th son of Taira Kiyomori and was a brethren with Munemori and Tomomori. In 1180, he and Tomomori gain victory and killed Minamoto Yorimasa and Prince Mochihito at Uji and burned Nara City. Which from that burning causing the destruction of Nara City not even Tōdai-ji Temple was burned to the ground. Although he can overcome Minamoto Yukiie at the Sunomata River but Shigehira was captured by Minamoto Yoshitsune's soldiers in 1184 and then forced to go to Tōdai-ji. Because of his sins that burned down the temple in January 15, 1181, make he was killed by the warrior monks in July 21, 1585. He died at the age 28. 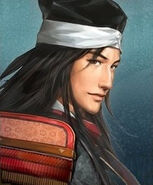