Not to be confused with a Toukiden character.

Shiki (志貴) is an original character in Warriors All-Stars.

He is Tamaki's older brother and the eldest child of the former king. Shiki possesses the Yasakani Magatama as proof of his royal lineage.

For unknown reasons, he obstructs Tamaki and Setsuna's claims for the throne.

After the events of Warriors All-Stars, Shiki and his relatives are devoured by a demon and warp to Nakatsu Kuni near Shinonome Village. Their royal treasures protect their souls from being devoured by the demons of Ōka's world. Surrounded by demons, Shiki weakens many of them until Tamaki guides the protagonist's party to his rescue.

Before the protagonist's party reaches him, Tamaki is captured by a demon. The party pursues it to the tenth level and find Shiki fighting the demons alone. Setsuna inquires if Shiki has seen his sister which alarms him to her disappearance. Shiki immediately joins the search for Tamaki. Once his sister is saved, Shiki collects the royal treasures and recites the incantation to send the trio back to their home world.

Okitsu carefully played Shiki to be a "ruthless man" who has his own set of beliefs. He likes his character's ears.

He bears the countenance and mannerisms befitting a prince, yet Shiki hardly displays emotions. He always acts in a collected manner and shows no mercy to anyone, even to his own family.

The Yasakani Magatama is one of the Three Imperial Regalia of Japan.

: Shiki swings his sphere to the up left, to the right, then thrusts it forward. He then swings it down left, up right, then does an overhead swing downwards onto the ground.

: Shiki shoots several spheres in front of him via a circle formation.

: Shiki drags his sphere on the ground and swings it upwards, creating multiple spheres to fly at the enemies.

: Shiki makes multiple spheres fly onto the ground in front of him.

: Shiki leaps upwards while summoning orbs to swirl upward around him like a tornado.

: Shiki lays two spheres in front of him, then unleashes them to fly around in circles to generate a cyclone.

: Shiki shoots several spheres down to the enemy.
Jump +

: Shiki dives to the ground and signals three spheres to rain down.

: Shiki sends his orb into the sky, and then summons a large number of orbs that float in the sky. He then sends them all raining down to damage enemies.

Shiki's moveset is the exact same as Setsuna's, but with a sphere instead of a sword. 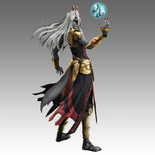