Shu was ruled by Liu Bei, who, along with his sworn brothers Guan Yu and Zhang Fei, spent most of his life in exile wandering from lord to lord to escape Cao Cao, until finally seizing the lands of Shu from his cousin Liu Zhang to establish his kingdom. Shu was also comprised of Hanzhong and Jingzhou. Jing was subsequently conquered by Wu in 219 A.D. In 263 A.D after years of war between Shu and Wei, the Kingdom of Shu Han fell.

The cause of Shu's fall has been debated often over the years. Some attribute it to Jiang Wei's reckless Military Campaign against Wei and political corruption, and some attribute it to Shu's poor lands, which were mountainous and rugged.

In the historical novel, Romance of the Three Kingdoms, the kingdom of Shu experienced many troubles, and many triumphs. Before gaining land of his own, Liu Bei had joined the other influential figures against Zhang Jiao and the Yellow Turbans, and also against Dong Zhuo. During that time, Liu Bei gained many followers, including his future oath brothers, Guan Yu and Zhang Fei. To gain a strategist, Liu Bei visited the hermit Zhuge Liang three times. On the third visit, Zhuge Liang agreed to help Liu Bei on his conquest. With the advice of his new ally, Liu Bei gained lands from relatives, and took his own.

Around the year 208, at the naval battle of Chibi, Zhuge Liang had allied with Wu to attack a common adversary, Wei. Zhou Yu, Wu's strategist, devised a master plan with Shu to burn Wei's ships down. While Shu strategist Pang Tong was placed into Wei, in order to persuade the enemy, Zhou Yu tortured a Wu veteran, Huang Gai, making it seem like the latter would turn against his force. Wei believed this trick, and welcomed Huang Gai into their army. Pang Tong had made the Wei army chain their ships together, and when the time was right, Huang Gai and his following unit lit one Wei boat on fire. Zhuge Liang had prayed at an altar for winds to spread the fire, and because of Pang Tong's chain strategy, the Wei fleet had burned to the sea.

In 219, Lu Meng, a strategist for Wu, had gained the land of Jing. Guan Yu, who had been attacking near there at the time, was captured by the alliance of Wu and Wei, and was executed. This enraged Liu Bei, who, in the novel, had sworn along with Zhang Fei and Guan Yu to die on the same day. Ignoring advice from others, Liu Bei went for the attack on Wu, and was met with no success.

In the year 220, Cao Pi seized the imperial throne, and declared that it was the Wei Dynasty. In response, Liu Bei proclaimed himself the new Han Emperor. A few years after, however, after many battles, including the loss at the Battle at Yiling, Liu Bei died of illness. The Shu kingdom's rule was succeeded by Liu Shan, Liu Bei's son. Zhuge Liang had made several invasions to the north, including the Nanman Campaign, but it was a failure. On the sixth attempt, Zhuge Liang, prime minister of Shu, passed away of illness.

Zhuge Liang was succeeded by many, but the last successor was Jiang Wei. He tried to continue the former strategist's plans to invade the north, but each time, he was left with fewer men and supplies. In 263, Wei campaigned against Shu one last time, and succeeded. Jiang Wei tried to rebel, but was killed. Liu Shan, however, gave up and retired, after being named the Duke of Comfort. Many nobles and commoners alike were displaced, and fled.

The Five Tiger Generals (五虎大将軍) are five generals of Shu considered to be of extraordinary value to the kingdom. They include:

There is an absence of an explicit mention of the title and the recognition by Liu Bei in official documents. At the same time, there is a possibility that the generals received the rank posthumously via way of Liu Shan. The Records of Three Kingdoms, however, compiles the biographies of the five within the same chapter and the text's author, Chen Shou, gives an analysis on them collectively. It is also interesting to note that in 219 AD, after Liu Bei appointed himself the King of Hanzhong, the generals with the exception of Zhao Yun were promoted into consecutive high-ranking positions.

The novel Romance of the Three Kingdoms could be another source for the grouping. Chapter 73 gives a passing mention of how they were to become known as the "Five Tiger Generals" after Liu Bei ascended into the role of King of Hanzhong, not unlike history. The rank itself had no administrative or military duties attached to it, so the bestowment is generally seen as one of prestige and as one which would inspire fear into the hearts of enemies, especially considering the meritorious careers of the honorees.

The Four Heroes, or Four Ministers, are a circle of ministers accredited with stabilizing the Shu administration. They were all respected greatly, for the most part trusted by Liu Shan, and were relatively high-up in the civil hierarchy for their kingdom. The term does not seem to refer to any official position, but rather simply as a grouping among the Shu people. It is mentioned in an annotation from Dong Yun's Records of Three Kingdoms entry.

The Five Retainers are five generals of Shu who Zhuge Liang, while on his deathbed, advised Yang Yi to retain after his death. In some translations of Romance of the Three Kingdoms, it is portrayed as an actual title rather than a passing suggestion.

The description of Shu in Romance of the Three Kingdoms is internationally popular in folktales and fiction.

One of the best references to Shu in other fiction would be Water Margin, one of the four classic Chinese epics. In Water Margin, Guan Yu had a fictional descendant, Guan Sheng. He mirrored his ancestor's appearance and inherited his grandfather's weapon, Green Dragon Crescent Blade. Guan Sheng was fifth rank among the 108 stars and was nicknamed "Large Blade". Another character named Lin Chong was described to nearly match Zhang Fei in appearance and also wielded the same snake lance. Lin Chong was the rank after Guan Sheng, nicknamed "Panther Head", and also had an oath brother named Lu Zhishen. Yang Xiong, who was another of the 108 stars, was also known under the nickname "Sick Guan Suo".

Additionally, both Guan Sheng and Lin Chong were two of the Five Tiger Generals of Mount Liang.

In Japan, the famous three visits that Liu Bei did to recruit Zhuge Liang is adapted for Hashiba Hideyoshi and Takenaka Hanbei. The Taikoki recorded Hideyoshi visiting the hermit three times to appeal to him. Their "Guan Yu" was Hachisuka Masakatsu (Hachisuka Masatoshi's eldest son) and their "Zhang Fei" was Maeno Nagayasu (Tsubouchi Mitsukage). Mitsukage was said to have highly favored Masakatsu and they became sworn brothers. 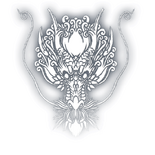