Sophitia Alexandra (ソフィーティア・アレクサンドル) is an original character created by Namco for the Soulcalibur series. A former holy warrior who fought for the god, Hephaestus, her goal in life is to hunt and destroy Soul Edge. Fragments of the blade were injected into her body when it shattered once, and its dark energies infected her and her then unborn children. Soul Edge's malevolence turns her children mad whenever the sword or its fragments are nearby. She fights with the hopes of saving her children from its influences.

Sophitia wanted to return home after her ending in the fourth Soulcalibur, worried for her children. She is sucked into a time distortion along the way and dragged into the dimensional realm. During her time there, parts of her world have merged with what remains of Liaodong. Assisted by Nene, Sun Jian, and Masanori, she is able to defeat the serpent troops swarming the vicinity. Unable to return home, however, she puts finding her children on hold and joins the Coalition out of gratitude.

Sophitia is a kind and caring woman who puts the lives of her family members above all others. She is protective of her younger sister Cassandra to point of scolding her if the latter has been out fighting. A devoted mother, she will do whatever it takes to protect her children, Patroklos and Pyrrha. When defeating opponents in battle, she reprimands them like ill-behaving children while always speaking in a soft motherly tone. She refuses to take the lives of others under any circumstances, believing all life to be precious.

She shares an affinity with Sun Jian, Nene, Joan of Arc, and Yinglong.

Her second and third weapons allude to Soul Calibur and Soul Edge respectively. Both blades played a central role in the Soulcalibur series and were eventually wielded by Sophitia's children during the fifth game.

"Haha! I hope so. However, I'm sure your children are just as happy. They have a mother who is willing to risk her life for them. Any child would be proud to have such a parent."

when performing a strong attack other than C1 will bestow her weapon with the flame attribute as well as enhance its damage output.

: Grabs hold of an enemy, places their head between her thighs, and then slams her entire body onto their head into the ground. Said attack dealing minor damage around to near by enemies.

): Slashes opponent up into the air, jumping with them. If

is repeatedly tapped, she will then perform a powerful downwards slash. If

is only pressed once, she will simply jump into the air, which can be followed up by her standard

: Performs a powerful thrusting punch attack with her shield arm to stun enemies. It is the only attack that, when

is held to make the move stronger, will imbue her attack with Electric elemental damage rather than Fire.

: Performs a powerful 630 spin to attack enemies on all sides.

: Slams sword straight down into the ground, knocking enemies in the surrounding area up into the air.

: Performs a series of left-to-right slash attacks before finally ending her combo with an upward slash to knock back enemies.

: Places sword into her shield hand and performs a powerful upwards slash attack using the built up momentum from the weight of the shield on her arm.

: Slams the ground to create fissures, damaging enemies on contact.

: Slashes to the right with her sword

R1: Performs a short dash, has temporary invincibility while performing the move.
R1,

: Performs a small thrusting attack with her sword after dashing.
R1,

: Performs a spinning kick that generates a tornado around her after dashing.

, R1: Vaults unto the opponent's shoulders, twists them around, then rams shield against their head upon landing. Said shield attack dealing minor damage around to near by enemies.

: Performs a powerful downwards slash to strike a nearby enemy. If the attack connects, she will dash towards the enemy, then kick off them while throwing her sword at their stomach. She will kneel down to pray, and a lightning bolt will strike the enemy, using her sword as a conductor rod. The lightning bolt will cause an electric explosion, damaging the grappled enemy severely, while dealing moderate damage to the enemies surrounding them both. If the initial strike misses and a grapple cant be made, the initial slash will generate an after effect slash to damage enemies nearby.

: Throws shield to have it boomerang around horse.

: Repeatedly slashes towards her right.

Sophitia is the ideal Technique type character, with a modest attack range, decent attack speed, and is very good at dealing, and receiving, damage. She is the only character in the game who has, effectively, four different Special attacks. Her ground R1 grants temporary invincibility, enabling players to escape when surrounded by enemies. She is also capable of chaining her R1 with

to perform different moves, giving her three special attacks while on the ground.

Because of her move sets special feature, allowing players to hold down the

button to enhance the strength of her charge attacks, Sophitia greatly benefits from having the Iron Gauntlet accessory. With it one no longer needs to worry about being attacked and interrupted while charging up her

Sophitia is also one of the few characters to benefit from a glitch that causes her Musou attack to trigger the Absorption and Osmosis weapon skills. Because of this Sophitia greatly benefits from having these skills as they will activate from her charge attacks, and her Musou, meaning its nigh impossible to run out of either HP or MP when playing as her. She greatly benefits from the Echo skill, as it enhances her already impressive attack range, and also causes her grapple attacks to deal more damage to both the target of said grapple attacks, as well as damaging surrounding enemies.

A few of Sophitia's attacks are references to her original moves in the Soulcalibur series.

Sophitia uses the following big star weapons in the game. 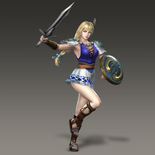