Sterkenburg Cranach (ステルケンブルク・クラナッハ) is an original character created by Gust for the Atelier series. A self-proclaimed knight, he was once a part of Arland's knighthood until the kingdom turned into a republic. Now an experienced adventurer, his current goal is to find his former liege and question why the knighthood was abolished.

During the events of Atelier Meruru, Sterk was on his way to Arland after completing an escort mission when a sudden rift in time-space brought him to the dimensional realm. He wanders around the dimensional world until he comes upon a village at Xu Province and protects it from the attacking demon army. He is relieved by Coalition forces and joins them soon after to someday return home.

Quiz Battle Toukiden has him magically sucked into Nakatsu Kuni after one of Rorona's experiments goes haywire. When Rorona and the protagonist find him, he was holding his own against the demons around him. He agrees to regroup with the others to find a way back to Arland.

Sterk is a serious individual whose stern countenance intimidates others around him. Most women and children find it difficult to approach him and may often misunderstand his intentions. This is especially true during his first encounter with Sun Shangxiang as he treats her devotedly like any other princess, much to her chagrin. Aside from his chivalrous nature, he is fond of raising pigeons and uses them to send messages during work. During his time in the dimensional world, he has also formed an affinity with Huang Gai, Yoshimoto, and Motochika.

His fourth weapon is Claíomh Solais, or "the Sword of Light", a legendary weapon from Irish folklore. Users often need to perform chivalrous deeds before they have the right to wield it.

"He is strong like a tiger and a fierce warrior. I do worry about him being a little too reckless though."
"A reckless ruler... I have memories of one such as that. He was constantly abusing his power."
"Well, it can be fun when you grow older. You are still young and have much to experience."

: Sterkenburg's classic Aedel/Edel Strike skill from Atelier Rorona. Bends down back to his left side with both hands on his sword to delay for a two-handed thrust forward in a brief wind-tunnel. Guard breaks.

: Turns with an inward reaping diagonally-down slash then a launching-sweep slash back along the same line.
EX Attack:

: Performs his original Light Storm (Licht Storm in Japanese) skill from Atelier Meruru, where he leaps into the air to slam his sword down, sending a series of stunning thunderbolts forward.

: Sword Blitz skill from Atelier Totori. Puts his free hand along his sword's blade to flash lightning around himself with an aura burst gesture, then performs a leaping inward turning slash which unleashes a slashing effect.

: Falkenwint/Falken Wind from Atelier Meruru. Summons a lightning strike to infuse his sword and then releases it as a giant beam wave shaped like a dove.

: A leap into a wide-clearing slash that brakes his run.

: An upward scooping slash downward to the left.

R1: Performs a full turn into a lowered posture to fire a beam straight forward from his sword along the ground. Based somewhat on his original Lichschneiden skill from Atelier Totori.

, R1: While hovering in the air, swings his sword upward akin to some of his other moves for a launching slash, then reaps downward two-handed for a lightning bolt that generates a small storm upon hitting the ground.

: Performs his original Gaia Breaker (Gaia Break in Japanese) skill from Atelier Meruru. Infuses his sword with lightning, does four slashes creating an energy ball that explodes and forms the image of a moon as a backdrop. Has his eyes glow red for the duration of the attack. 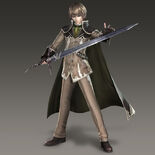