Before her marriage, Sun Ce and Lu Xun's families shared antagonistic ties for one another due to the former's invasion of the south. Wanting to gain their support for his reign, Sun Quan arranged for the marriage after his brother's death to make peace with the prominent Lu family. Another source states that their betrothal was due to Sun Quan being impressed by Lu Xun slaying a group of bandits. She later gave birth to Lu Kang.

She appears as a character in the Romance of the Three Kingdoms series; like many other female officers, she debuted in the series's eleventh title. Her stats trend more towards political endeavors rather than military affairs. Her personal skill protects the city she's in from locust and plagues, making Sunshi more valuable in cities outside of war zone and directed to raising the force suplies. 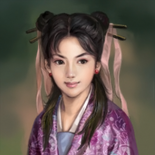 Paired portrait with Sun Quan and Sun Deng
Add a photo to this gallery
Retrieved from "https://koei.fandom.com/wiki/Sunshi?oldid=463596"
Community content is available under CC-BY-SA unless otherwise noted.