Tatara (たたら) is a secondary character who resides in Utakata Village. The player can find him to the right of their protagonist's home.

He is the only blacksmith in Utakata Village. Tatara forges anything any client wants from him, whether it be weapons or armor or his popular Tenko ornaments. He may seem stubborn and gruff, but he pours his heart and soul into his craft. One villager desires to be his apprentice, but, based on the young man's progress, it might take him years for him to work beside Tatara in the shop.

When his soul is being consumed by Izuchikanata in Kiwami, he believes that humanity has won against the demons and is drinking himself into a stupor.

Higher affinity additionally increases the chances of him appearing within the village's bathing area.

Pay him the needed sum of haku and assemble the proper ingredients to forge weapons and armor. New equipment is unlocked based on the player's progress with the main story. The recipes for any item can be reviewed within his shop menu. Prices are listed next to each creation.

Once the player has created a weapon or piece of armor, they can continue to upgrade it. The maximum upgrade is Level 9. They can only upgrade it by obtaining the necessary parts again. After the main story, players can automatically upgrade certain weapons to a higher level if they have enough parts available.

Weapon fusions can be upgraded by Tatara. Upgrading the Slayers' personal weapons doesn't change their elemental properties or base attack, but it can increase their soul count and critical attack rate. 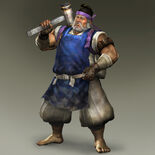 CG render
Add a photo to this gallery
Retrieved from "https://koei.fandom.com/wiki/Tatara?oldid=215167"
Community content is available under CC-BY-SA unless otherwise noted.