Edit
watch 02:59
Wiki Targeted (Games)
Do you like this video?
Play Sound

Tazu (田鶴) is a fictional name that was created in the Edo period for Tsuratatsu Iio's wife. When the Imagawa fell into disarray after their defeat at Okehazama, she turned against them and became leader of the Iio clan after her husband's death. Edo period folklore created her to be a duplicitous crook who is consumed by greed and power.

The Nobunaga no Yabou 201X poll for 3-star officers puts her in third place. Before Samurai Warriors Chronicles 3 was ported overseas, Koei titles addressed her as Otatsu in their English localization.

Sengoku Musou Chronicle 2nd and the fourth title mentions Tazu as Naotora's best friend and confidante. When her friend first inherited the Ii clan, her support convinces Naotora to serve Ieyasu. Both narratives have Tazu perish soon after Okehazama. Naotora visits her grave after Sekigahara in the fourth title.

Nobunyaga no Yabou highlights her kitty counterpart during the Dokii! Himedarake no Neko Senki scenario. Tazu-nyan is a callous villain who bullies her pensive husband to embrace his ambitions. She is written to be Naotora's greatest nemesis during her brief reign of terror.

Nobunaga no Yabou 201X has Tazuhime team up with Naotora and Lady Hayakawa to vanquish the UMA horde in Tōtōmi. Tazuhime may sound bitter towards Naotora but they share a hearty friendship. She is the veteran fighter amongst the trio but an amateur tactician. Hatsuna loses her patience watching them and coordinates their formations twice to ease her frustrations. Tazuhime recognizes their savior but decides to withhold pursuing the onmyouji as a show of gratitude.

Otatsu no Kata comes from unknown origins. She isn't mentioned in any written accounts until her husband, Iio Tsuratatsu, conspired to rebel against his Tōtōmi rival, Ii Naohira, in 1563. According to the Ii Naohira-ko Ichidai-ki, Otatsu poisoned Naohira's tea when he visited Hikuma Castle on September 18 the same year. Naohira's death led to the Iio family taking possession of the castle. Otatsu was known for her fiery temper, craftiness, and strictness. She stood by her husband's side when he was accused of treason in the months that followed. Her orders matched the caliber of a samurai general and her anger with disobedience was well known. The castle defenses were coordinated by her command and she personally took to the field in December 1563.

Tsuratatsu was either murdered or ordered to commit suicide by Imagawa Ujizane in 1567 in an effort to punish his alleged betrayal and to choke the Iio and Ii family rivalry. Regardless of the conflicting accounts of her husband's fate, Otatsu remained defiant against the orders to leave her husband's castle. According to the Mikawa Gobudoki, she was outraged that her sex deemed her weak in the political realm and fortified the castle defenses. She then sent an appeal to defect to the Takeda.

Before Tokugawa Ieyasu laid siege to Hikuma Castle in December 1568, his messengers passed the appeal for a peaceful surrender and a promise for the women and children's safety. Otatsu rejected him by saying, "Women we may have, and they are born samurai. None who live here would dare submit their home to their enemy." On the first day of the siege, Sakai Tadatsugu and Ishikawa Kazumasa lost against the defenders. By the next day, their gates were overrun. Otatsu had armed herself in armor and fought with a naginata while accompanied by sixteen similarly armed maids. She fought towards the front gate and lost her life in battle. Both written accounts about the siege report that the defenders were completely annihilated.

Ieyasu reportedly said in memoriam to her, "There is no man alive who could have protected their beliefs so rigidly like you did." According to folklore, she became posthumously associated with the name Tsubakihime (translated as "Camellia Maiden") because the grave of her remains and her maids blossomed Japanese camellias. Lady Tsukiyama, Ieyasu's wife, was said to have looked after them and marveled that no other camellias could match their radiance. 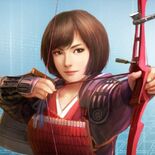 Tazuhime in Nobunaga no Yabou 201X 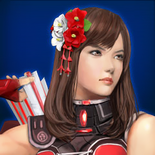