Edit
watch 02:59
Wiki Targeted (Games)
Do you like this video?
Play Sound

Tokitsugu was once a human and the blacksmith of Mahoraba. After losing his body, his soul was saved by the Professor and her mechanic contraption. Indebted to her, he serves as her aide and goes on various chores for her.

Furusawa remarked that the Warriors All-Stars team had consulted the developers of the original IPs for each character. When they had presented their prototype actions for the Toukiden cast, the Toukiden team balked at their choices and demanded that they be heavily revised. The Warriors All-Stars team based the character visuals on Kiwami or Toukiden 2. Furusawa summarized that Tokitsugu was chosen for impact.

Yamadera remarked that voice actors record their lines without any visual aids for video games, so he often struggles to imagine his character's reactions to events. This concerned him for this game in particular due to the large amount of character interactions he had to voice. He also thinks "Nobunyaga" is difficult to pronounce.

Although his exterior looks adorable and dwarfish, Tokitsugu is really a heroic older brother figure. Many Slayers look up to him. Simple-minded and practical, he doesn't dwell on his situation since he feels he hasn't truly lost anything of importance.

While he is grateful to her and obliges her, he is wary of the Professor's whimsy. Tokitsugu also doesn't appreciate arrogance and often butts heads with Homura.

: Tokitsugu shoots straight forward twice, then leaps into the air and shoots once. He then extends an arm to grab the ground to keep him in the air, then shoots 3 more spreading shots to the ground, the last of which detonates.

: Extends forth a magical hand to grab a single enemy, and reels himself to them.

: Tokitsugu shoots fireworks forward, then grabs the ground, releasing a circle of magic that slows down the enemies' movements.

: Shoots a volley of bullets twice at enemies.

: Tokitsugu shoots two energy balls towards the ground. Both detonate a large explosion when they hit the ground.

: Tokitsugu fires consecutive purple projectiles while sweeping his rifle left to right in an arc.

: Fires a single shot down to the ground.

: Tokitsugu materializes his large arm and swipes it upwards. He then flings his arm to the left twice. 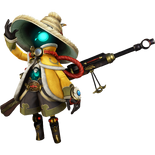 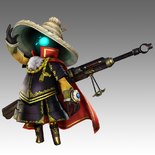