The Tokugawa clan (徳川氏) is one of the few samurai families from ancient times to remain active in Japan today. In the Samurai Warriors franchise, the clan usually is represented by the color blue.

Matsudaira Motoyasu, the ninth head of the Matsudaira family, created the family name sometime after he declared independence from Imagawa Yoshimoto. He either did this when he was neutral allies with Hideyoshi or after the Taiko's death. With his victory at the Battle of Sekigahara, he established the Tokugawa shogunate. His family's reign lasted for over two hundred years until the birth of the Meiji era.

The following lists Ieyasu's descendants. It does not include any other branches.

The Three Heroes of Tokugawa (徳川三人衆 or 徳川三傑) were three generals historically recognized as the "big three" retainers of the Tokugawa clan. The first lists the generals during Ieyasu's Sekigahara Campaign.

The Four Guardian Kings of Tokugawa (徳川四天王) were four mighty generals who were believed to have greatly contributed to Ieyasu's campaigns. Their namesake, as with most other four guardian kings titles, was the Buddhist Four Heavenly Kings. It's not known whether this title was fictional, but it has been romanticized in paintings and novels during the Edo period.

The Seven Spearmen of Ueda (上田七本槍) were seven generals who performed admirably during the second struggle at Ueda Castle. They bravely guarded Hidetada with their lives and ensured that they survived Sanada Masayuki's tactics. Even though they still suffered defeat, these men were praised for their courage. It is more likely that these men actually used arrows and other artillery rather than spears during the battle.

The Sixteen Heavenly Generals of Tokugawa (徳川十六神将) is a title that was invented during the Edo period. Like the Four Heavenly Kings, this title was made based on the Buddhist Twelve Heavenly Generals. The reasons why these generals were chosen are unclear but it was presumably made for those who practice their faith at Tōshō-gū.

The Twenty-Eight Heavenly Generals of Tokugawa (徳川二十八神将) is another title that was fabricated during the Edo period. It is believed that this rank was made as a counterpart to the Twenty-Four Generals of Takeda. At the Nikkō Tōshō-gū, these men are commended to have greatly helped Ieyasu.

Due to Ieyasu's unique characteristics, there are a few legends and theories surrounding his actions that are popular in fiction.

Among the many conspiracies surrounding the Incident at Honnōji is Ieyasu's role in the event. Historically, Ieyasu was away from his lord at the time and, when he heard that Nobunaga was in danger, he wanted to rush to his lord's rescue in spite of the small number of attendants with him. However, Tadakatsu advised for his lord to avoid the risk and urged for a quick retreat to Mikawa. Masanari led the way through Iga and they returned home by boat.

However, skeptics think otherwise. While they usually accept the historically known facts about Ieyasu's actions during Mitsuhide's betrayal, theorists tend to pay more attention to the events before. Ever since Ieyasu lost his wife and son due to Nobunaga's orders, they reason, he held a secret resentment against his lord. Generally, there is some belief that he privately goaded Mitsuhide to take action when the two warlords were together in Azuchi Castle. Together, they planned when to attack and went their separate ways. When the deed was done, Ieyasu turned a blind eye to Mitsuhide's schemes and fled the scene to feign innocence. A variation of the concept states that Ieyasu was well aware of Mitsuhide's feelings regarding Nobunaga and simply chose to do nothing for his own benefit.

Like all the theories and conspiracies surrounding Honnōji, it's unknown if any of these ideas are true.

Ieyasu had an impostor?[]

The Tokugawa Ieyasu's Kagemusha Legend (徳川家康の影武者説) is a myth that has been circulating since the Edo period. It is believed to have arisen due to historical records of Ieyasu's "sudden change of behavior" with some of his closet colleagues. The idea was made more popular in modern times by the historians, Tokutomi Sohō and Yasutsugu Shigeno.

The general outline of the legend is that after the Battle of Okehazama, Motoyasu (Ieyasu) was ready to face the world as a changed man. According to Hayashi Razan, the last line was meant quite literally. Before Motoyasu could make his new face known to the world, he was replaced by a completely different man named Sarata Jiro Saburo Motonobu (Sakai Jōkei). Variations include that the switch actually occurred much earlier in Motoyasu's life when he was being a hostage. Motonobu went in Motoyasu's stead and was considered a more suitable "heir". After Motonobu replaced him, Motoyasu fled and lived a hermit's life. Another version states that Ieyasu was actually killed during the Battle of Sekigahara or the Osaka Campaign. When he was killed by Sanada Nobushige during the latter conflict, it is said that he was replaced by Ogasawara Hidemasa who became the "Ieyasu" from then on.

While prevalent in fiction, historians are unsure whether or not the myth holds any merit. His dubious personality traits during these specific time frames have been mostly blamed on stress and personal strain. 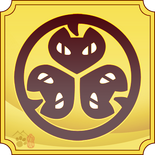