Tony Tony Chopper (トニートニー・チョッパー) is the doctor of the Straw Hat pirates and the sixth member of Luffy's crew. He meets them when the Straw Hats visited Drum Island in order to heal Nami. Chopper is a reindeer who was treated as an outcast by his fellow reindeer because his blue nose. Later on, he ate a Devil Fruit, the "Hito Hito no Mi" which grants the eater human attributes and human intelligence. However, this caused him to be cast away by both reindeer and humans who came to fear him, as he took on a human-reindeer hybrid appearance. He was rescued by Doctor Hiruluk who gave Chopper his name and made him his medical assistant. After the terminally ill Hiruluk passed away, Chopper then became a pupil of another doctor named Kureha on Drum Island, learning all of her medical techniques and becoming a full-fledged doctor. He later assisted the Straw Hats in defeating Wapol before joining them as the crew's doctor.

Chopper is very naive and childish at times, which is to be expected given his age. He is also easy to impress and very fond of compliments. Despite this, he takes pride in being called a doctor and thinks that doctors should help other people no matter what. Because of this, he cannot forgive those who call themselves "doctors" for personal gain.

: "Scope": Chopper swipes to the left with his right hand, then to the right with his left hand. He then runs forward while repeatedly punching with both hands. He then throws himself forward, butt-first. He then does a tiny hop forward to release crosshairs onto enemies.

: "Heavy Point": Chopper changes to Heavy Point form and does an uppercut swipe to launch enemies up. He then jumps up to grab a single enemy, throws him/her down, then slams his body onto him/her on the ground.

: "Heavy Point~Heavy Gong": Chopper changes to Heavy Point form and stomps the ground with force. He then rapidly punches the ground, then does a hard left punch while leaping. He then transforms back.

: "Heavy Point": Chopper changes to Heavy Point form, then jumps and drops his body onto enemies with a body slam.

: "Heavy Point": Chopper lets out a shockwave roar in Heavy Point form, then rams his shoulder forward, then leaps up and drops his body down with a body slam.

: Chopper grabs a single enemy, slams him/her down onto the ground, then rapidly punches in front of him. He finishes by jumping forward to kick the enemies away.

: "Scope": Chopper slams the ground with his fists, then spins around rapidly with his arms outstretched, punching enemies. He then leaps into the air and then rains crosshairs down.

: Level 1 Musou: "Rumble~Cloven Rose Blizzard": After taking a Rumble Ball, Chopper turns into his Arm Point form, which enhances his upper body strength. He then unleashes a deadly flurry of rapid, repeated forward palm thrusts in front of him, before finishing with a final two-handed thrust.

: Level 2 Musou: "Rampage": Chopper takes three Rumble Balls, turning into his Monster Point form. He slaps to the left, then right, then does a final hard-hitting slam downwards onto the ground.

R1 (Special Skill): "Guard Point": Chopper will enlarge himself, resembling a large ball of fur. If he is attacked while in this form, he will counterattack by knocking enemies away, then scatter crosshairs all around him.

: "Scope": Chopper does a hand swipe to the left, then right, then runs forward rapidly punching, then does a jumping kick, then unleashes a series of crosshairs.

: "Kung Fu Point": Chopper goes into Kung Fu Point form, then does a backflip kick to launch enemies up, then rapidly does kung-fu attacks on his airborne prey. He finishes by dropping to the ground with a powerful axe kick.

: "Kung Fu Point": Chopper goes into Kung Fu Point form and flies forward while spin kicking around him. He then finishes with a jumping sobat.

: "Kung Fu Point": Chopper goes into Kung Fu Point form and does a jumping uppercut, then comes down with a flying kick.

: "Colonnade Rose": Using Horn Point form, Chopper runs forward through enemies with his horns, then jumps into the air swinging his horns.

: Chopper kicks an enemy into the air, then grabs him/her and slams him/her back down, then unleashes a rapid flurry of kicks in front of him. He then does an uppercut and finishes with a left handed punch.

: Level 1 Musou: "Horn Cannon Elf": Chopper goes into Horn Point, then digs underground. He then re-emerges with a forceful burst, blasting enemies away.

: Level 2 Musou: "Cloven Palm": Chopper takes a Rumble Ball and goes into his Monster Point form. He then punches the ground to launch enemies up, then punches the airborne enemies away, creating a forward-traveling shockwave.

R1 (Special Skill): "Scope": Chopper sends out crosshairs to latch onto enemies. If they hit, they will allow Chopper to pierce their defenses.

Chopper was originally a normal reindeer with a blue nose. He ate the Human-Human Fruit, which is a Zoan-class Devil Fruit that bestows upon its consumer human intelligence and traits. Due to his small size in his default form, Chopper's hitbox for when in his default form is rather small. Being a Zoan Devil Fruit user, Chopper is able to morph into different forms, which have several functions depending on the situation (like using a human form to gain strength, or changing into a reindeer-human hybrid form for additional speed). His default form is a reindeer-human hybrid form called "Brain Point", where he walks on two legs. In this form, he can "Scope" enemies out, identifying their weaknesses. In-game, he does this by shooting out crosshairs to latch onto enemies, to lower their defenses. He also created a jaw-breaker, called the "Rumble Ball", which he eats to enhance his overall strength, granting him access to more forms. Eating three of them causes him to transform into an uncontrollable but powerful monster for a short amount of time..

After the timeskip, Chopper has mastered his Devil Fruit to the point that he no longer needs the Rumble Ball to access his various different forms. He even created new forms, such as Kung-Fu Point for hand-to-hand combat. The only time he needs a Rumble Ball is for Monster Point, which he now has full control over. However, Monster Point lasts for a very short time, and Chopper becomes incapacitated after using it. 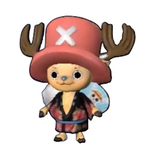 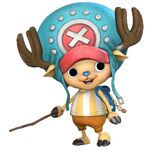 One Piece: Pirate Warriors 2 render
Add a photo to this gallery

Retrieved from "https://koei.fandom.com/wiki/Tony_Tony_Chopper?oldid=438513"
Community content is available under CC-BY-SA unless otherwise noted.