Toukiden 2 (討鬼伝2) is the third main installment of the Toukiden series. It was first announced to the public on stage at the SCEJA Press Conference 2015.

The series's developers return. Kenichi Ogasawara is the general producer, Takashi Morinaka is the producer and Kazutoshi Sekiguchi is the director. Hidari continues to be the main character designer.

Buy the game new to receive a redeemable code for Tenko armor sets. The Treasure Box edition features an artbook, a soundtrack CD, character clear files, and a code for Tokitsugu armor sets. The Gamecity and Amazon sets include the Treasure Box bonuses, Slayer key charms, two clear files, and a code for a Nyabraham Linnyahn Mitama. Other bonuses are being offered at various store outlets.

Players will receive 10 sacred branches in the full game after playing the final demo.

This game's setting takes place two years after Kiwami. Demons have engulfed all of Nakatsu Kuni with a peculiar miasma, and the Slayers are expected to combat the threat. Somewhere within the world lies a dark secret and a giant threat from the Meiji period.

The protagonist for this game is a Slayer who fought in the defenses of the "Awakening". They wandered into a dimensional portal during the fighting and emerged into the current setting as an amnesic at Mahoroba Village, a village west of Utakata that was surrounded by a mysterious power during the "Awakening".

Only Hatsuho and Soma return in this game. This page will only list new additions.

This is one of the titles present at Koei-Tecmo's Tokyo Game Show 2015 booth. It was given a staged introduction September 17.

A closed thirty-two person trial was held March 26. Interested players can register for consideration until February 28. On April 11, a demo of the game became available. Team ENMC was among those who tested the gameplay during the voice cast announcement. Another broadcast to showcase PS Vita footage will be simulcast to Nico Nico Live and YouTube Live on May 13, (20:00) JST.

Studio 4°C is continuing to create animated promotional shorts for the series.

The comic serialization will be one-shots of the new Slayers done by five different artists: Tousen, Yu Hijikata, Yoshisada Tsutsumi, Retsu Tateo and Asagi Ohga. The first episode starts in Dengeki Maoh's August 2016 issue. Each story comes with an exclusive Mitama for players.

Another Nico Nico Seiga Mitama design contest was held from March 23~May 8 with the winner's illustration being included in the game. The winning entry is Kukurihime.

An edit character contest is being held until August 4 to decide which participant has the best-looking face in the demo. Players must upload their submission on Twitter to become one of four lucky winners who will be given a T-shirt and character pin badges.

LINE has released a set of character stamps for customers to use. 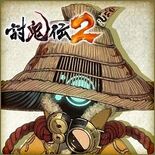 Hideki Sakamoto and KenKen making music for the game

Game is out in Japan

Fanart from one of the Mitama illustrators, Karuta Shiki

Fanart from one of the armor designers, Ebila

LINE sticker set
Add a photo to this gallery

Retrieved from "https://koei.fandom.com/wiki/Toukiden_2?oldid=432457"
Community content is available under CC-BY-SA unless otherwise noted.