Volga (ヴァルガ, Varuga) is a secondary antagonist in Hyrule Warriors and one of three characters who were patched to be playable through a later update. He is an original character created by Omega Force and Team NINJA who draws inspiration from Volvagia in Ocarina of Time.

Volga is the Dragon Guardian of the Eldin Caves, his duty to protect it from outside forces while ruling his monster followers and allowing the Gorons to mine there. When Cia first became corrupted by Ganondorf's influence, she entered the Eldin Caves to enlist his help. When he refused to aid her willingly, she corrupted his mind with her dark powers to serve her, acting as one of her main generals alongside the sorcerer Wizzro.

Volga's design is based on the dragon Volvagia from Ocarina of Time. Designers purposely made him look as inhuman as possible, so that when players encountered him, they would instantly know he was an incarnation of Volvagia.

Confident in his own might, Volga constantly searches for strong opponents while leaving behind a trail of carnage. He would stop at nothing to obtain victory.

X: Volga performs a frontal spin with his spear before stabbing the ground with it. Can also be used while evading attacks. This attack is will always break the opponent's guard.
Y, X: Volga swings his spear upwards, creating a small flame eruption that launches enemies upwards.
Y, Y, X: Volga turns his left arm into a dragon's claw and swipes at enemies with it, sending forward 3 slash projectiles. This is quite similar to the Master Sword's version of this combo.
Y, Y, Y, X: Volga spews a torrent of flame in in a circular sweeping motion in front of him. Can be directed with the control stick to further increase the move's range.
Y, Y, Y, Y, X: Volga twirls his spear in front of him before turning into his dragon form and flying up into the air. He then divebombs the ground, creating a large fiery shockwave upon landing. This move takes several seconds to land, but can clear out mobs of infantry and put a dent in commanders.
Y, Y, Y, Y, Y, Y: Volga performs several wide slashes with his spear. A pillar of flame erupts in front of him, trapping enemies in it. He then charges forward through the flame pillar to impale enemies on his spear.

A: Volga charges forward to impale enemies with his spear, leaving a trail of flames in his wake. This move's range is thin, but devestates those caught in it.
Focus Spirit + A: Volga tosses his spear into the air, sprouts dragon wings and flies up to grab it before crashing the ground spear-first.
Focus Spirit Finisher: Volga turns into his dragon form and flies around in a circle to gather nearby enemies together before divebombing them.

Weak Point Smash: Volga sprouts his dragon wings, flies into the air with a spear swing, then comes down slamming his weapon into the ground.

Volga's moveset is power-based and loaded with overstated animations. His spear attacks have good range and is versatile for most situations. Players may need time to adjust to his charges and special techniques since they require good aiming to be effective in duels.

The second and third variations cannot be unlocked without the Master Quest DLC pack. 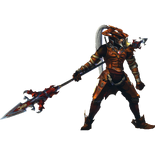 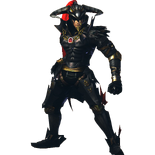 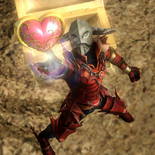 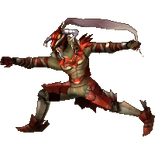 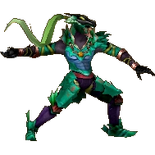 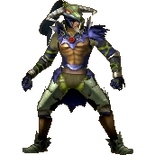