Wang Jun (王濬, onyomi: Ō Shun) is a general of Jin. In 280, he led the assault force that conquered Jianye and forced Wu Emperor Sun Hao to surrender.

Wang Jun is a decent officer in Romance of the Three Kingdoms. He is given high battle skills and can be found during later scenarios in the Central Plains. He distinguishes himself from other officers of the area due to his very high abilities in naval warfare. In the eleventh installment, his skill allows for faster building of vessels. Using him as the leader of a naval force to lead an assault on the Southlands can prove to be a good choice, but the lack of later scenarios in most games makes it difficult to utilize him.

Wang Jun (206-286, style name: Shìzhì) was from Hongnong in Si Province and born into a family that had served in many governmental positions for generations. During his youth, he was known as a handsome, well-learned, but also quite uncautious, yet ambitious person. The Wei minister Xu Miao gave him his daughter in marriage and when he went to apply for a post in Hedong, a man named Yang Ji pointed out his high ambition and immoral and luxurious habits, so that he should not be given a post. However, when he was met by Yang Hu, the latter noticed his talents and put great trust in him. He was given a post in Yi Province and in 272, he was promoted to Administrator of Guanghan. There, he received an imperial edict, ordering him to construct warships, each holding 2,000 men. Each bow should represent a mythical figure. Afterwards, he was promoted to Governor of Yi Province.

In 279, he was among those who petitioned the Jin Emperor Sima Yan to lead a campaign to subdue Wu. Wang Jun was made a general and put under the command of Du Yu. He was dispatched to Chengdu and ordered to sail the fleet down the Yangtze River and take any positions on his way. During the journey, the Wu forces attempted to block the fleet via iron chains, but Wang Jun's forces were able to break through. He conquered numerous commanderies and cities within Jing Province in the process and eventually reached the Wu capital Jianye. Wu Emperor Sun Hao decided to surrender and China was reunified. His merits were recognized by the court, but he and his father were accused of misconduct and treated poorly. Thanks to the minister Li Mi, Sima Yan became aware of this and raised Wang Jun's rank. Wang Jun lived out his final years in great luxury and was promoted several times until he died in 286. His son Wang Ju inherited his title.

Wang Jun appears only in the final chapter of Romance of the Three Kingdoms. He sent a memorial to Sima Yan, advising him to attack Wu. He was put in charge of one half of the Jin navy during the assault of Wu. The Wu forces met him by deploying iron hammers in the river. To counter that, Wang Jun had a few rafts of timber constructed and put armoured straw effigies on them. He sent them down the river and the Wu soldiers, mistaking the effigies for real soldiers, fled in terror. The rafts continued to sail on and the chains were dragged away. Due to a few torches and straw soaked in oil that would be lighted once a chain was hit, the chains melted because of the heat and allowed the Jin navy to continue downstream. Wang Jun's forces eventually reached the city of Niuzhu and conquered it. He sent a memorial to the court, reporting his victory. Despite objection from Jia Chong, Sima Yan sent an edict ordering the Jin forces to press on. After the remaining Wu navy led by Tao Jun was destroyed by a storm, one of the captains urged Wang Jun to anchor, but Wang Jun decided to continue. He met the Wu general Zhang Xiang who offered to surrender and led Wang Jun's men into the capital. Sun Hao therefore surrendered, ready to die. Wang Jun loosened Sun Hao's bonds and burnt the coffin that was prepared. He was promoted to General Who Upholds the Sate. 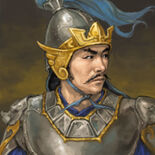 Romance of the Three Kingdoms: The Legend of Cao Cao battle sprite
Add a photo to this gallery
Retrieved from "https://koei.fandom.com/wiki/Wang_Jun?oldid=464532"
Community content is available under CC-BY-SA unless otherwise noted.