Xushi (徐氏, onyomi: Joshi) is the wife of Sun Yi and the sister-in-law of Sun Quan. Well-versed in the art of I Ching, she bravely avenged her husband's death by cleverly entrapping his murderers one by one.

Her design theme for Blast was to portray a mysterious beauty whose defining characteristics is her beauty mark and her giant fan normally kept underneath her clothing.

Xushi can be recruited starting in Romance of the Three Kingdoms XI, mainly appearing in the fourth and fifth scenarios. Aside from her high intelligence and charisma, she is one of the few female officers in the series to have a passable rating in leadership. Her personal skill guarantees the trickery strategy success against low INT units. Lady Xu is able to handle some battles by abusing this skill and also makes a useful supporting commander for any army. The twelfth title lists 183 as her birth year and 232 being her death year.

Lady Xu is introduced in Chapter 38 of the novel. A skilled diviner, she predicted misfortune in Sun Yi's future and warned him not to attend his meeting with the local leaders of Danyang. Unfortunately, he did not heed his wife's words and was killed by Bian Hong after the banquet. Gai Lan and Dai Yuan, both of whom secretly despised Sun Yi, were the conspirators of this crime. They made Bian Hong a scapegoat by beheading him in public and began ransacking their late master's home, hoarding his property and concubines for themselves.

Upon seeing Lady Xu's beauty, Gai Lan was overcome with lust and sought to make her his own. She agreed to marry him after being given a month to mourn her husband. In truth, she used that time to formulate a plot with Sun Gao and Fu Ying, two of Sun Yi's loyal retainers. When Gai Lan returned one month later, he was lulled into a false sense of security by Lady Xu who prepared him a feast with plenty of wine. She escorted the drunk villain to her bedroom where the collaborating officers leaped out of their hiding place and slew their target with daggers. Likewise, the same fate befell Dai Yuan when Lady Xu invited him to dine in her home. She also asked the two officers to execute the relatives of their victims for good measure.

With her enemies dead, Lady Xu donned her mourning outfit once more and offered the heads of Gai Lan and Dai Yuan before her husband's coffin. While many in Danyang were aghast by this incident, Sun Quan rewarded Sun Gao and Fu Ying for their fealty while taking Lady Xu in his care. A poem was written in honor of her heroism.

Full of resource and virtuous, few in the world are like her,
Guilefully wrought she and compassed the death of the lusty assassins,
Faithful servants are always ready to deal with rebellion,
None can ever excel that heroine famous in Wu. 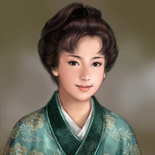 Paired portrait with Sun Yi
Add a photo to this gallery
Retrieved from "https://koei.fandom.com/wiki/Xushi?oldid=463634"
Community content is available under CC-BY-SA unless otherwise noted.